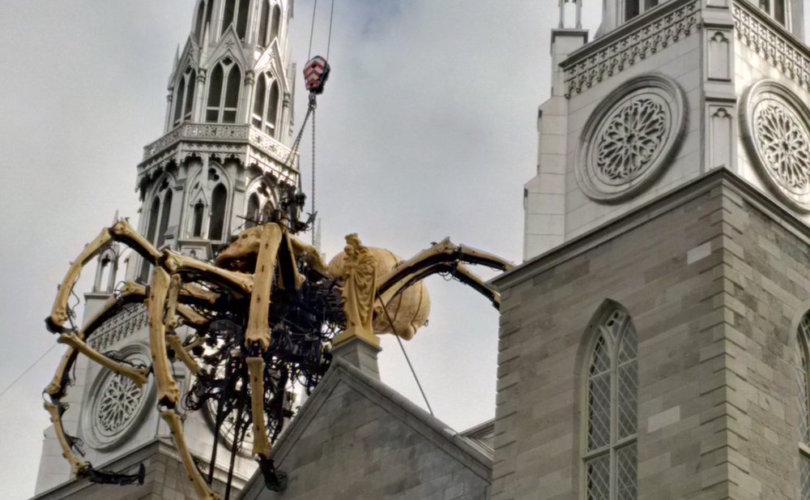 OTTAWA, July 28, 2017 (LifeSiteNews) — Upset Catholics are urging prayers of reparation after Ottawa’s Notre Dame Cathedral Basilica allowed a giant robotic spider to tower over a statue of Mary on its roof as part of a secular street show.

The massive robotic spider’s descent from the roof of the Cathedral Thursday kicked off La Machine, a street performance by French artists taking place in the city this weekend as part of Canada’s 150th anniversary celebrations.

Dominique Boily, founder of Ottawa’s private Catholic Notre-Dame du Mont Carmel School, says the archdiocese should not have permitted La Machine to use the cathedral.

“This is not a little detail, it’s just horrific,” the father of nine told LifeSiteNews. “How can we do that to Our Lady?”

The drama is based on a quasi-pagan story of “Long Ma—a cosmic creature who is half-horse, half-dragon” who “keeps watch over humanity” from “the ninth level of heaven,” according to the website for Ottawa 2017, which planned the event.

“But a sinister force that has taken the form of a giant spider slips into his home as he sleeps, burning his wings and robbing his sacred temple,” it says.

Guy Laflamme, Ottawa 2017 executive producer and director, told LifeSiteNews the archdiocese was aware of how La Machine would be staged.

“I’m very proud to confirm that I’m the one who negotiated with His Excellency the Archbishop and this was done with a high degree of respect, it was done a year, a year and a half ago,” he said in a telephone interview from Ottawa.

LifeSiteNews contacted Archbishop Terrence Prendergast’s office, as well as Monsignor Daniel Berniquez, rector of Notre Dame, but did not hear back by deadline.

After criticism from Catholics on Thursday, the Archdiocese issued a statement Friday explaining their decision.

According to the statement, Berniquez was “approached last year to see if he would allow the cathedral parking lot and parish hall” for the event. La Machine “offers an opportunity for the archdiocese, the Catholic community and Notre Dame Cathedral Basilica to cooperate with the city and the organizers to foster a positive relationship with the community at large as well as with many tourists, especially with young families,” it said. “It is also an opportunity for a positive civic relationship by joining in the Capital’s celebrations of our 150th, Ottawa 2017.”

However, Berniquez confirmed with CBC News the archdiocese allowed the use of the cathedral.

“We encourage people to participate, as a church, in all the dimensions of the life of the city and in the world,” Berniquez told CBC. “So we said it’s a good occasion for the church to participate … and make people happy.”

“It’s becoming a signature element” of the production “to start the event with the spider on churches,” he said.

But this was not a symbolic but “purely an artistic decision in terms of the beauty of the architecture” and because churches are “gathering places in communities,” Laflamme contended.

“There’s no bad intention, there’s no meaning of having the spider on a church,” he said. “It’s purely and simply because of the visual beauty and the beauty of the spectacular nature of the scene.”

Attending #LaMachine tonight, there is still plenty of space on the North side of the Cathedral! Joins us there 🙂 #ottawa2017 #ottnews pic.twitter.com/PmkIyDj8xA

Kumo is about to wake at any second now! �� #LaMachine #ottawa2017 pic.twitter.com/Eyz3asf85Q

Interestingly, Archbishop Prendergast himself explicitly gave symbolic weight to the drama, when he tweeted Thursday night after “Kumo” had descended:

Boily says it’s a scandal, and he repudiates the idea La Machine appeals to children.

While en route to Toronto early Thursday morning, “my kids actually saw this hideous thing on the Cathedral and they yelled,” he told LifeSiteNews. “I didn’t see it and I didn’t believe them, so I actually went back.”

He thereupon contacted the archdiocese, asked his wife to do likewise, and to alert their friends.

“It was a public act from the diocese,” Boily told LifeSiteNews. “Clearly they decided to do something which is I think a grave sin and there needs to be public reparation for that in some shape or form.”

Boily, who prayed the Rosary in front of the Cathedral Thursday night with his children, said he’s planning another.

“We’re going to do our part, we’ll probably go after Mass on Sunday, around 10 to say the Rosary in front of the Cathedral to [make reparation] to the heart to Mary,” he said.