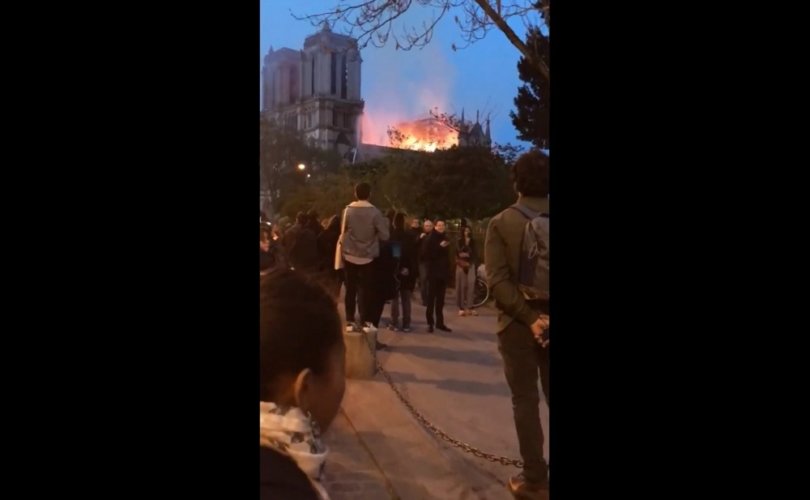 PARIS, April 16, 2019 (LifeSiteNews) — As the ancient cathedral of Notre Dame burned, reverent Catholics were seen kneeling on the streets nearby in Paris.

Believers were seen singing “Ave Maria” in French and praying the Rosary — the ancient intercessory prayer of Church — while firefighters battled flames that consumed the steeple and much of the roof of Notre Dame on Monday, the first day of Holy Week. The cathedral has been a part of the Parisian skyline for more than 850 years and been one of the most visited tourist spots in Europe. On Facebook, many posted that they wept when they heard the news of the fire.

Spanish correspondent Ignacio Gil of El Mundo posted on the evening of the blaze a video that soon garnered more than 700,000 views. The video showed Parisians kneeling in prayer as they watched the destruction.

Expressing sadness over the fire, French president Emmanuel Macron told the French people via Twitter, “Notre-Dame is aflame. Great emotion for the whole nation. Our thoughts go out to all Catholics and to the French people. Like all of my fellow citizens, I am sad to see this part of us burn tonight.” He told reporters that he will seek help from the “greatest talents” of the world to rebuild.

The blaze started at Notre Dame near the front of the structure, where scaffolding was in place for costly restoration work. French authorities are treating the fire as an accident that may be associated with the ongoing works at the church.

Much needed repairs inspired a fundraising campaign that brought donations from around the world. French billionaire François-Henri Pinault, who owns the French luxury group Kering, which includes the Louis Vuitton brand, made a pledge of 100 million euros to restore the structure. He told AFP, “My father [François Pinault] and I have decided to release as of now from the funds of Artemis a sum of 100 million euros to participate in the effort that will be necessary for the complete reconstruction of Notre Dame.”

#PopeFrancis spoke by phone with French President @EmmanuelMacron on Tuesday afternoon, expressing his solidarity with the people of #France in the aftermath of the fire that devastated #NotreDame Cathedral in Paris. @AGisotti pic.twitter.com/GcBZpJrP1n

The iconic bell towers and the church’s famous stained glass windows have been saved. However, the church is closed, and police have formed a perimeter while an investigation is underway. Precious relics, artifacts, and art were saved by a bucket brigade of first responders, including Fr. Jean-Marc Fournier, the Catholic chaplain of the Paris fire department. Among the pieces salvaged from the flames were the Crown of Thorns, believed to have been placed on the head of Jesus before His crucifixion, as well as the tunic of St. Louis, king of France.

Various religious and national leaders expressed condolences.The Vatican released a statement, for instance, saying Pope Francis “has seen with shock and sadness the news of the terrible fire.” Spain’s Prime Minister Pedro Sánchez tweeted that the fire is a “catastrophe for France, for Spain and for Europe,” adding that the flames were destroying “850 years of history, architecture, painting and sculpture.” President Donald Trump was in Minnesota when news of the fire prompted him to say, “It’s a part of our growing up, it’s a part of our culture, it’s a part of our lives.”

The foundations of Notre Dame de Paris (Our Lady of Paris) were set down in 1160, and the cathedral was nearly complete 100 years later. It saw restorations and modifications over the centuries, as well as theft and destruction of much of its sacred imagery during the French Revolution of the late 1780s and 1790s.

Some commenters sought to analyze the significance of the near destruction of Notre Dame, while others speculated that it may have been the result of the sort of vandalism seen in recent weeks in France, in which Catholic churches have been targeted with acts of desecration and arson. On a Facebook page of the Priestly Fraternity of Saint Peter, a traditionalist Catholic society of priests and seminarians, a post offered that the fire may be a symbol of “Catholic apostasy” and “culpable ‘amnesia’ of our Western elites, sabotaging the Christian legacy of Europe[.]”

Noting that the cathedral was turned into a temple of sacrilegious pagan rites during the French Revolution, the post said it was eventually “given back to the true worship of the true God, Jesus Christ.” It said finally, “Let us beg God for the same grace to be granted us before long, not only in Notre-Dame, but all across our former Christian countries, and the world over.”