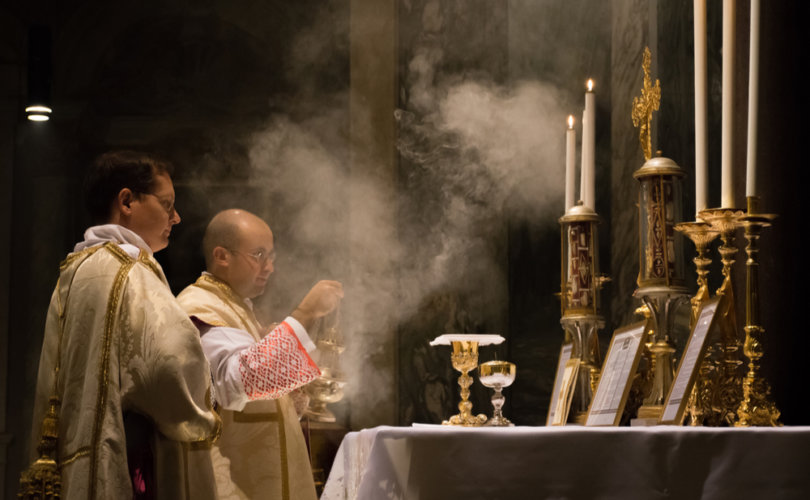 PARIS (LifeSiteNews) — An association of French Catholics is organizing a march from Paris to Rome to convince Pope Francis to temper his restrictions on the Traditional Latin Mass as laid out in the motu proprio Traditionis Custodes.

The march is due to take place this spring, starting in Paris on March 6 and ending in Rome on May 1. It will be held under the motto “all roads lead to Rome.”

The march is organized by La Voie Romaine (the Roman road), an association of French lay faithful attached to the Traditional Latin Mass.

The association was founded in the aftermath of the publication of Pope Francis’ motu proprio Traditionis Custodes which severely restricted the celebration of the traditional Mass and sacraments.

The aim of the association is to collect letters addressed to Pope Francis, expressing the faithful’s attachment to the Traditional Latin Mass, with a view to convince him to come back on some of the restrictions recently issued by the Vatican on the old Mass.

Once collected, the letters will be placed in a chest and carried to Rome. The march will be led by mothers of priests who celebrate the Traditional Latin Mass.

“These mothers were willing to take action and go to Rome, so, we proposed that they bring the letters to the Vatican,” Benoît Sévillia, founder of La Voie Romaine, told the National Catholic Register. “They will bring our testimonies with the very direct sensitivity that a mother’s heart can have.”

The initial December 31 deadline to submit the letters was pushed to March 5, 2022, the day before the march, in order to allow for more people to address their grievances to the Holy Father, particularly in view the publication of another document by the Congregation for Divine Worship and the Discipline of the Sacraments on December 18, which imposed even stricter limits on the traditional liturgy as laid out in Traditionis Custodes.

La Voie Romaine issued two separate communiqués on November 16 and December 19, expressing the faithful’s incomprehension at the restrictions and inviting every Catholic attached to the Traditional Latin Mass to write to the Pope.

“The very strict terms of application taken by the Congregation for Divine Worship has left us speechless,” wrote the association members in their December 19 communiqué. “The many letters we are already receiving from Catholics who feel hurt by Pope Francis’ decision to drastically restrict the celebration of the Mass and, from now on, to prohibit the celebration of the sacraments according to the Tridentine rite, must be multiplying.”

According to Benoit Sévilla, founder of the association, if Pope Francis decides to go through with the restrictions, he “would risk plunging thousands of Christians into great despair and disarray, because a certain number of them would be refused access to the Church from one day to the next.”

Catholics wishing to send a letter to Pope Francis and express their attachment to the Traditional Latin Mass, and their desire to continue to have access to it, can do so via La Voie Romaine’s website which will soon be made available in English and Italian.