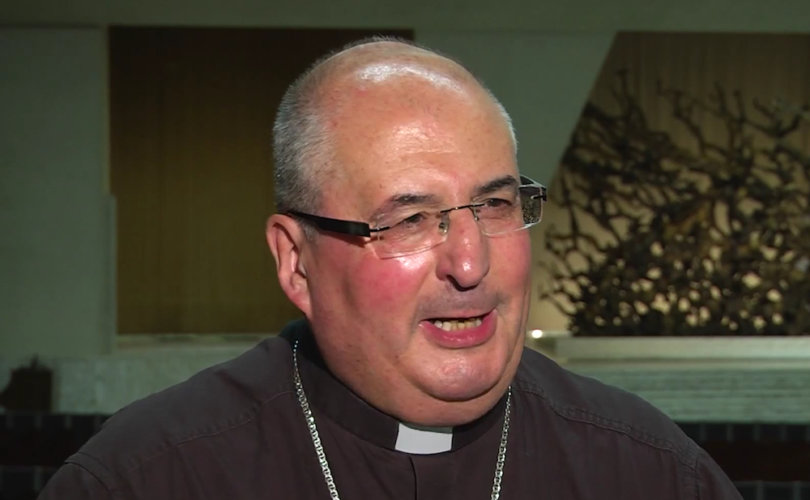 PHILADELPHIA, Pennsylvania, August 17, 2017 (LifeSiteNews) – Catholics are too weak in standing up for the faith, a Scottish archbishop said.

Too many have become fixed on avoiding secular criticism instead of taking it on, he said, in part because of groveling to those who dominate the culture and by giving in to political correctness.

“We accommodate. We compromise,” Glasgow Archbishop Philip Tartaglia said. “We avoid conflict — even when conflict is the only proper course. We are too wishy-washy, as we would say in Scotland.”

“Once upon a time, Catholics longed for and worked for the conversion of others, including a nation’s cultural elites,” the Scottish archbishop continued. “Now many of our Catholic leaders, intellectuals and academic institutions bend over backwards to assure the gatekeepers of culture and prestige that they’re just as right-thinking as they are.”

Archbishop Tartaglia addressed the Convocation of Priests of the Archdiocese of Philadelphia in May and his lecture was adapted for an August 8 CRUX article.

In his address, he compared the state of the Catholic Church in the U.S. to the UK, saying the U.S. church was stronger but that both share some challenges.

Citing a prevailing decline in the UK in church participation, the archbishop said there has been a collapse of the basic Christian beliefs and Christian culture that had been adopted and formed identities of most individuals there for centuries, and that religious identity has been replaced by skepticism, consumer appetite and political intolerance.

“It masks itself with progressive vocabulary,” Archbishop Tartaglia said, “but its targets tend to be practicing Christians.”

Atheists and secularists in the 1960s and 1970s were happy to simply ignore or mock the Catholic Church, he continued. And while previous signs of anti-Catholic sentiment may have faded, the archbishop said, “today many see her as the single most formidable threat to their notions of justice and equality, particularly when it comes to matters of human sexuality.”

The hostility is evident in differing ways between the States and the UK, but those in the U.S. should expect some versions to head their way, and the Church should also expect persecution for doing the right thing.

“The chief errors of our time are anthropological, and when a culture becomes global, so do its problems,” the archbishop stated. “If the Church dissents from today’s new rulebook for the human person — and she must — then she should expect rough treatment.”

First, he pointed to a separation from God and the awareness of His grace, as well as reducing Christ to a moral archetype.

“Too many believers no longer talk about Jesus winning salvation for the sinful but instead point to him as a moral ideal of what humans should strive for,” the archbishop said.

Archbishop Tartaglia also used the philosopher to illustrate current departure from a moral foundation in favor of emotion, saying Haldane “sees a chronic sentimentalism in how we deal with moral matters that demand clear, exacting thought.”

“There were problems with scholasticism and the old moral manuals,” the archbishop said, “but we used to preach on morals from training in rigorous moral argument.”

Regarding Catholics being wishy-washy on the faith and kowtowing to cultural elites, he said Haldane noted that this results in “the displacement of Catholic faith and sacramental practice understood in terms of a rigorous theology of grace and salvation, and their substitution by good works, identified and sustained typically through emotive rhetoric … ”

Of this approbation seeking, Archbishop Tartaglia said, “It’s a kind of virtue-signaling.”

The Church in the U.S. is still doing exceptionally well, however, and he said Christians still matter in the nation’s political, economic and social life. Further, he said the U.S. Church has “the resources, organization, freedom under the law, and breadth of imagination that exist almost nowhere else in the Christian world.”

“In America, Christianity is still a living force,” he said. “It can be attacked, but it can’t be ignored.”

Just as in Europe, the U.S. church will face some very serious challenges in the coming 20 years, Archbishop Tartaglia concluded. But the American church’s strengths and energies “give it a unique ability to influence the life of the Catholic Church in a deeply positive way and on a much wider level.”