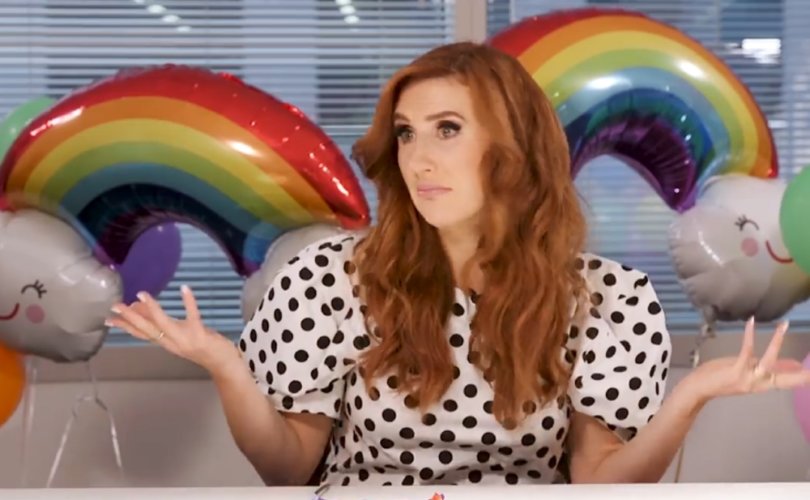 In a video funded by Canadian taxpayers, Jessi Cruickshank talks to young children about same-sex parenting, lesbian fantasies, and what it means to be a 'gay icon.'

June 12, 2018 (LifeSiteNews) – A Canadian media personality has fired back at LifeSiteNews for a critical article about a recent video proselytizing LGBT “pride” to children.

On June 5, LifeSiteNews reported on a video produced by the taxpayer-funded Canadian Broadcasting Corporation (CBC), released during what LGBT activists and media have declared to be “Pride Month.”

Styled like a kids’ TV show, it featured Jessi Cruickshank asking young boys and girls whether it would be “cool to have two moms,” telling them how actress Jodie Foster “made me question my sexuality” with a nude scene, urging them to “aspire to be a gay icon,” and more.

“To use young children to push the gay agenda is monstrous and manipulative,” Media Research Center Vice President of Business and Culture Dan Gainor told LifeSiteNews. “That this appeared on public media makes it even worse.”

On Monday, Cruickshank responded to LifeSiteNews’ article on Instagram, claiming her work on “the beauty of acceptance” instead started an “ugly controversy.”

“I believe in promoting education over intolerance. I believe people are born to love and taught to hate,” she continued, ending by claiming that the video demonstrated the next generation’s receptiveness to homosexuality.

“All of the ‘ugliness’ here comes from the original video, not the fact that we noticed it,” John-Henry Westen, co-founder and editor-in-chief of LifeSiteNews, said. “These children are all still years away from puberty, yet the Canadian Broadcasting Corporation apparently thinks nothing of introducing them to sexual fantasies or suggesting they look for nude videos.

“Sexualizing such young children and drafting them into the LGBT activist ranks is indefensible,” Westen continued. “Apparently even Jessi Cruickshank knows that deep down, considering she didn’t even try to defend it.”

Cruickshank’s post featured the article’s title and cover photo, but neither quoted from the piece nor addressed the specific objections it raised.

Among the criticisms she ignored was the near-certainty that an adult discussing heterosexual fantasies with small children would be universally condemned in any other setting, while a special exception is apparently made in the name of homosexuality.

Another was how the video glosses over the fact that having “two dads” necessarily means having no mother (or vice-versa).

“I dare the makers of this film to re-shoot the video,” said Katy Faust, a children’s rights activist who was raised by two lesbians, in a previous interview about the CBC video with LifeSiteNews.

Instead, she said, they should ask the kids, “do you think it would be cool to have no dad?”

“The response would go from ‘yes!’ to ‘that would be terrible,’” she said. “Because for most kids, it is.”

“If you doubt it, just ask any kid who lost their dad to divorce, abandonment, donor-conception or death,” she added. “Having ‘two moms’ or ‘two dads’ always means losing one parent that the child longs for, and has a right to. And that's an injustice.”