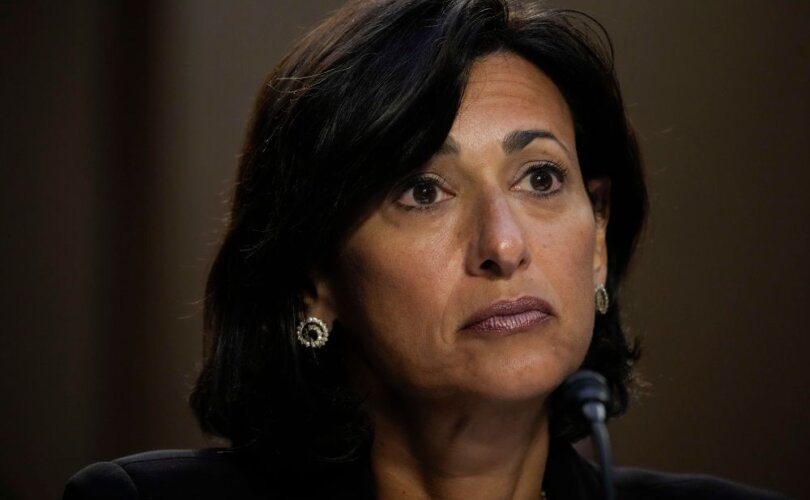 Centers for Disease Control and Prevention Director Dr. Rochelle Walensky testifies during a Senate Committee on Health, Education, Labor and Pensions hearing about the federal response to monkeypox, on Capitol Hill September 14, 2022 in Washington, DC. Photo by Drew Angerer/Getty Images

(LifeSiteNews) — The director of the U.S. Centers for Disease Control and Prevention (CDC) sparked outrage Tuesday over a poorly worded tweet hailing the “suffering [and] sacrifice” of the hundreds of African American men who suffered unnecessarily and whose informed consent was violated during the infamous 40-year Tuskegee syphilis study that ended in controversy in 1972.

CDC Director Rochelle Walensky made the remarks in a Tuesday tweet in which she responded to the CDC’s announcement it was launching an event to commemorate “the end of the Tuskegee syphilis study.”

“This year marks the 50th anniversary of the end of the Tuskegee syphilis study,” Walensky commented. “Tomorrow, I will be joined by colleagues & #PublicHealth leaders as we honor the 623 African American men, their suffering & sacrifice, and our commitment to ethical research and practice.”

This year marks the 50th anniversary of the end of the Tuskegee syphilis study. Tomorrow, I will be joined by colleagues & #PublicHealth leaders as we honor the 623 African American men, their suffering & sacrifice, and our commitment to ethical research and practice. https://t.co/cbR8Shy0Db

Twitter users reacted with indignation over the phrasing of Walensky’s tweet, highlighting the fact that the Tuskegee study has long been regarded a bioethical debacle that forever damaged the credibility of the medical establishment, especially among blacks.

In the study, researchers reportedly failed to inform participants of their condition and withheld crucial treatment from hundreds that could have cured them as they tracked the progress of their debilitating disease.

While ostensibly promising a commitment to ethics in contrast to the actions undertaken during the Tuskegee experiments, Walenksy’s clunky phrasing in referencing the infamous fiasco sparked online pushback.

“Wow, just wow. To think someone approved the wording for this tweet,” one Twitter user reacted. “Distasteful and very misleading. What those men suffered was horrible.”

“Horrendous tweet by the CDC Director,” tweeted former Georgia congressional candidate Barrington Martin II. “This is disgusting, irresponsible and reprehensible, and this tweet is unbecoming … from a lead government official.”

“CDC is obviously a graver threat to Americans’ health than any disease,” said journalist Tom Elliott.

“‘Sacrifice,’ is not the right word,” reacted Fayetteville Observer opinion editor Myron B. Pitts. “They were lied to. ‘Suffering’ is correct.

This is why people abhor “public health” as an institution

According to a summary published by Tuskegee University, the more than 600 men involved in the now-infamous Tuskegee Syphilis Study since its launch in 1932 had been “enticed and enrolled in the study” with the help of incentives, and had penicillin withheld from them even after the drug was determined to be a successful treatment for the disease.

The Associated Press reported that roughly 200 of the study’s participants had been “allowed to suffer [syphilis] and its side effects without treatment, even after penicillin was discovered as a cure.”

Though an advisory panel later determined that the study participants had freely consented to participate in the study, “there was evidence that scientific research protocol routinely applied to human subjects was either ignored or deeply flawed to ensure the safety and well-being of the men involved,” Tuskegee University stated.

According to the report, the study participants were never advised of the name, “purpose, and potential consequences of the treatment or non-treatment that they would receive during the study,” violating the principle of informed consent.

“The men never knew of the debilitating and life-threatening consequences of the treatments they were to receive, the impact on their wives, girlfriends, and children they may have conceived once involved in the research,” the summary said.