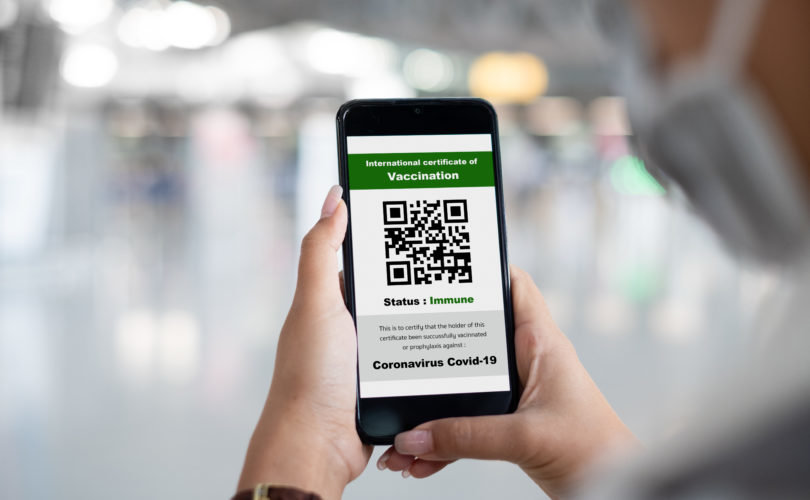 During an interview Tuesday on CNN, an anchor asked Walensky whether she believed “health passes” like those currently issued in Europe, which give vaccinated citizens access to public venues while barring those who have chosen not to get the shot, might be implemented in the United States.

“You know I think some communities are doing that, and that may very well be the path forward,” Walensky said.

She then went on to justify the CDC’s recent flip-flop on mask guidance by remarking that even in venues in which people are “fully vaccinated,” unmasked individuals may still transmit COVID-19.

It’s unclear what data Walensky was referencing to make the judgment about masking, and how small of a risk of transmission would be acceptable for refraining from taking up mask mandates, social distancing, and other COVID-19 related impositions.

Walensky said the CDC’s mask guidance update, which would impose masking upon roughly two-thirds of Americans, was based upon “new data.” But the information allegedly used to motivate the change has not been released to the public.

According to the Post, the CDC justified its reversal by claiming that “[p]eople who have had their shots and become infected with the delta variant of the coronavirus can harbor large amounts of virus just like unvaccinated people. That means they could become spreaders of the disease and should return to wearing masks indoors in certain situations, including when vulnerable people are present.”

However, the CDC has not publicly demonstrated how it arrived at that conclusion.

“They’re making a claim that people with delta who are vaccinated and unvaccinated have similar levels of viral load, but nobody knows what that means,” Gregg Gonsalves, an associate professor at the Yale School of Public Health, told the Post. “It’s meaningless unless we see the data.”

The latest commentary from Walensky and the CDC advocating vaccine passports and a return to masking in U.S. counties with low vaccination rates set off a wave of outrage this week, with conservatives urging Americans not to go along with the new guidance.

In a July 27 statement, former President Donald Trump said, “We won’t go back. We won’t mask our children. Joe Biden and his administration learned nothing from the last year.”

“Brave Americans learned how to safely and responsibly live and fight back,” Trump added. “Don’t surrender to COVID. Don’t go back! Why do Democrats distrust the science? Don’t let this happen to our children or our Country.”

Ohio state Senator Michael Rulli suggested Wednesday that “Americans will NOT comply with another wave of mandates and lockdowns.”

Americans will NOT comply with another wave of mandates and lockdowns.

Earlier this week, the Department of Veterans Affairs became the first federal department to require COVID-19 jabs for medical employees including facilities staff, and California and New York moved to force state employees and health care professionals to take the shot, be subject to regular testing, or lose their jobs.

President Joe Biden is expected to announce a government-wide vaccine mandate for all federal government employees.

In addition to imposing vaccine mandates, the Biden administration has refused to rule out a new wave of lockdowns.

During a press conference Thursday, principal deputy press secretary Karine Jean-Pierre told  reporters that if scientists recommended a return to lockdowns and school closures, the administration would “listen to the CDC, and the expert[s], and their guidance.”

NOW – Biden administration is not ruling out new lockdowns and school closures in the U.S., the experts at the CDC are in charge.pic.twitter.com/W0foMs88yd

Republican Florida Gov. Ron DeSantis has said that he would block mask mandates imposed by the federal government or enacted by Florida schools, and signed a bill to forbid vaccine passports at both the public and private level in his state.

“The CDC has destroyed their credibility,” Cruz added. “A year and a half ago, the CDC was one of the most respected scientific organizations in the world and they allowed themselves to be politicized — with Dr. Fauci at the helm of the politicization — and right now their credibility is in tatters because they behave more like an arm of the DNC than an actual, serious medical and scientific organization.”