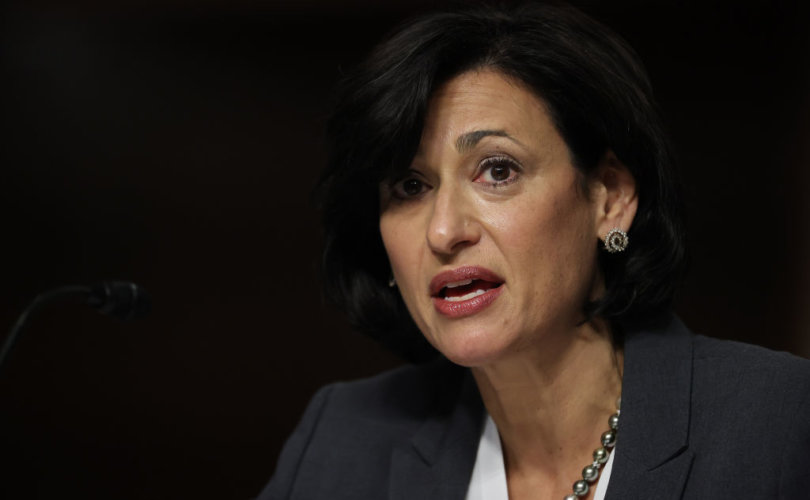 WASHINGTON (LifeSiteNews) — Centers for Disease Control and Prevention director Rochelle Walensky once again avoided answering questions regarding the vaccine uptake rate at her agency, and the CDC’s approach to COVID in the workplace more broadly.

Walensky was not able to answer Sen. Bill Cassidy’s (R-LA) questions in a Senate Health Committee hearing on November 4.

“What percent of CDC employees are vaccinated?” Cassidy asked Walensky.

“We’re actively encouraging vaccination in all of our employees, and doing a lot of education and outreach in order to get our agency fully vaccinated,” she replied, not providing a specific number.

“But the percent?” Cassidy pressed.

“I don’t have that for you today,” responded Walensky.

Further probing the matter, Cassidy informed Walensky that he has been “told” that “north of 75 percent” of “CDC employees at headquarters are still working remotely,” and then asked the director, “Is that correct?”

“We are following regulations and HHS (Health and Human Services) through the federal government,” she stated.

“No, that’s not my question,” followed Cassidy. “I apologize to be rude … but I’m asking a very straightforward question. I’ve been told that north of 75 percent of employees at CDC headquarters are working remotely, is that correct?”

“Senator, I don’t actually know the number off the top of my head,” Walensky said.

“Okay, well, when you look down the hallway, are there empty desks?” Cassidy rephrased. “Are over 50 percent of the desks empty?”

“Senator, I don’t have the numbers off the top of my head,” Walensky repeated. “What I will tell you is we are working closely within HHS and the administration to follow the governmental rules for the return to work.”

Expressing frustration with Walensky’s answers, Cassidy continued, “I say this because I just want it echoed, we’ve got to lead by example in the federal government, if our Public Health agencies don’t have enough confidence in the immunization and the PPE to go back to work fighting infectious disease, there’s going to be a lot of undermining of a willingness to further fund Public Health.”

This is the second time during a Senate hearing that Walensky has stated she does not know how many of her employees at the CDC are vaccinated against COVID-19.

In May of this year, before the Biden administration announced they were mandating all federal employees get the jab, another senator, Richard Burr (R-NC), asked Walensky similar questions. Burr also posed the same question to Dr. Anthony Fauci, Director of the National Institute of Allergy and Infectious Diseases (NIAID), a division of the National Institute of Health (NIH).

“We’ve been doing town halls and education seminars. Our staff have the option to report their vaccination status, but as you understand, the federal government is not requiring [vaccination] so we do not know [how many have taken the jab],” Walensky stated.

In the same hearing, Fauci, speaking on behalf of the NIH, told Burr that while he is “not 100 percent sure,” he believes only “a little bit more than half, probably around 60 percent” of staff at the NIH have elected to receive one of the experimental vaccines against COVID-19.

Regardless of the vaccines’ “approval” from the U.S. Food and Drug Administration (FDA), all currently available COVID-19 injections are experimental, with clinical trials not being set for completion until 2023.

Further, the list of FDA-recognized adverse events have grown from severe anaphylactic reactions to include fatal thrombotic events, the inflammatory heart condition myocarditis, and neurologically disabling disease like Guillain Barré Syndrome, as well as thousands of recorded deaths and permanent disabilities.

Despite the widespread reports of death and injury, and the fact that the injections are experimental, the CDC went ahead and approved the shots for children as young as five earlier this month.

“The risk-benefit discussion for children with these Covid-19 injections is a very different one than that for adults,” Alexander said. “The fact is that this is a completely novel and experimental injection therapy with no medium or long-term safety data (or even definitive effectiveness data). If we move forward with the vaccination of our children without the proper safety testing, then we will present them with potentially catastrophic risk, including deaths in some.”