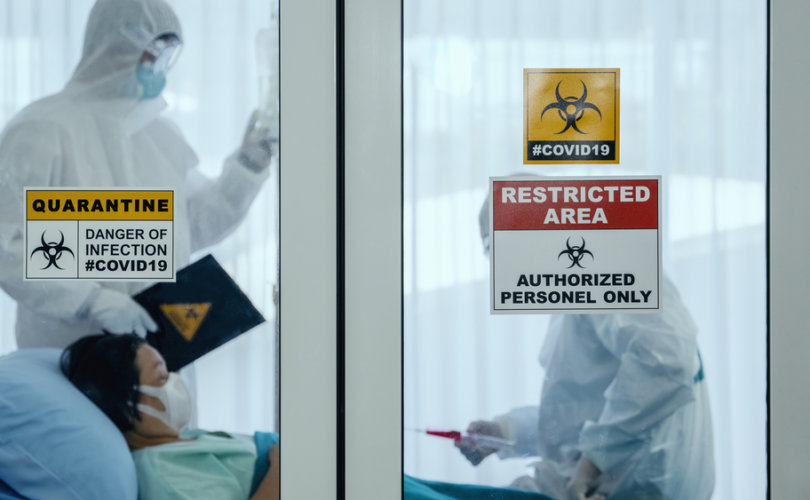 (LifeSiteNews) – The Centers for Disease Control and Prevention (CDC) last year explored a strategy to isolate people living in camps into segregated, closely monitored groups, saying that the approach “may prove effective in preventing COVID-19 infection.”

In a document published in July, 2020, the CDC outlined implementation of the so-called “shielding approach,” particularly for “camps, displaced populations and low-resource settings,” like refugee camps.

“This approach has never been documented and has raised questions and concerns among humanitarian partners who support response activities in these settings,” the CDC said. The agency’s document sought “to highlight potential implementation challenges” and “guide thinking around implementation in the absence of empirical data.”

The CDC cited guidance released in March 2020 by the London School of Hygiene and Tropical Medicine (LSHTM) on a “more targeted approach of specifically preventing infections among groups at high risk of COVID-19 mortality,” which the LSHTM referred to as “shielding.”

“The shielding approach aims to reduce the number of severe COVID-19 cases by limiting contact between individuals at higher risk of developing severe disease (‘high-risk’) and the general population (‘low-risk’),” the CDC summarized.

People deemed high-risk, like the elderly and those with underlying conditions, “would be temporarily relocated to safe or ‘green zones’ established at the household, neighborhood, camp/sector or community level,” and would have “minimal contact” with family members and the surrounding community. Camp-level shielding, the largest arrangement proposed by the LSHTM, would feature a group of shelters, with “green zones” of up to 50 individuals each.

Despite “no empirical evidence,” the CDC appeared to encourage the shielding method, calling it “an ambitious undertaking, which may prove effective in preventing COVID-19 infection among high-risk populations if well managed.”

“In theory, shielding may serve its objective to protect high-risk populations from disease and death,” the CDC document said. “However, implementation of the approach necessitates strict adherence to protocol.”

In a section on “operational considerations,” the document stressed the need to “monitor” compliance of individuals isolated within green zones. “Monitoring protocols will need to be developed for each type of green zone,” it stated. “Dedicated staff need to be identified to monitor each green zone.”

“Monitoring includes both adherence to protocols and potential adverse effects or outcomes due to isolation and stigma,” the document continued, without discussing whether or how staff would enforce adherence.

“[S]mall village, sector/block, or camp-level shielding” ultimately “may allow for greater adherence to proposed protocol” the CDC said, though the agency warned of risks of “long-term social impacts.” Camp-level quarantining described by the LSHTM and the CDC involved strict control of movement, with near-total isolation from the outside world for long stretches of time.

The LSHTM document also hinted at the possibility of coercion, recommending that residents not be forcibly confined inside a green zone – at least “generally.”

“In all cases, it should be made explicit to communities that their behavior must change, perhaps drastically, if they are to lower the risk to all, and especially to the most vulnerable.”

“Doing nothing should not be considered an option,” the guidance added, noting that “important alterations to religious practice, custom and tradition will be imperative.”

The CDC acknowledged that shielding, as outlined by the LSHTM, would naturally entail “loss of freedom and personal interactions,” likely necessitating “additional psychosocial support structures/systems.” It could even exacerbate “exploitation” and “abuse.”

“Separating families and disrupting and deconstructing multigenerational households may have long-term negative consequences,” the CDC said.

— Article continues below Petition —
PETITION: No to mandatory vaccination for the coronavirus
Show Petition Text
1081791 have signed the petition.
Let's get to 1100000!
Thank you for signing this petition!
Add your signature:
Show Petition Text

The agency nevertheless envisioned implementing the method for several months at a time.

“The shielding approach proposes that green zones be maintained until one of the following circumstances arises: (i) sufficient hospitalization capacity is established; (ii) effective vaccine or therapeutic options become widely available; or (iii) the COVID-19 epidemic affecting the population subsides,” the CDC document said.

“Given the limited resources and healthcare available to populations in humanitarian settings prior to the pandemic, it is unlikely sufficient hospitalization capacity (beds, personal protective equipment, ventilators, and staff) will be achievable during widespread transmission.”

“Thus, contingency plans to account for a possibly extended operational timeline” beyond six months “are critical,” the document continued.

While the CDC’s considerations on the shielding approach said that it remained untried at that point, regions of India apparently had already begun imposing similar measures. A month before the CDC document, the Hindustan Times reported that police-enforced quarantine of vulnerable groups in Kerala was “taking a big toll on the elderly,” according to mental health experts.

“Last time when I went out a police officer told me next time he will book me,” a 72-year-old retired government worker told the newspaper. “Deprivation of travel is almost like   incarceration,” another person reportedly said. The Indian city of Mysuru appears to have gone further, opening a dedicated “reverse quarantine facility” last summer for anyone whose relatives tested positive for COVID-19 and began isolating at home.

The effectiveness of “shielding” has since been called into question by recent data. A study published three weeks ago by Scientific Reports found that high-risk individuals in quarantine remain five times more likely to die from coronavirus than those less susceptible to the virus.

“Our study … showed that shielding may be of limited value in reducing burden on health services because, in spite of the shielding strategy, high risk individuals were at increased risk of death,” a study co-author said, according to UPI.

Editor’s note: a previous article on this subject, published August 10 2021, with the headline “CDC offered plan for internment camps in so-called ‘shielding’ initiative” has been withdrawn by LifeSiteNews.