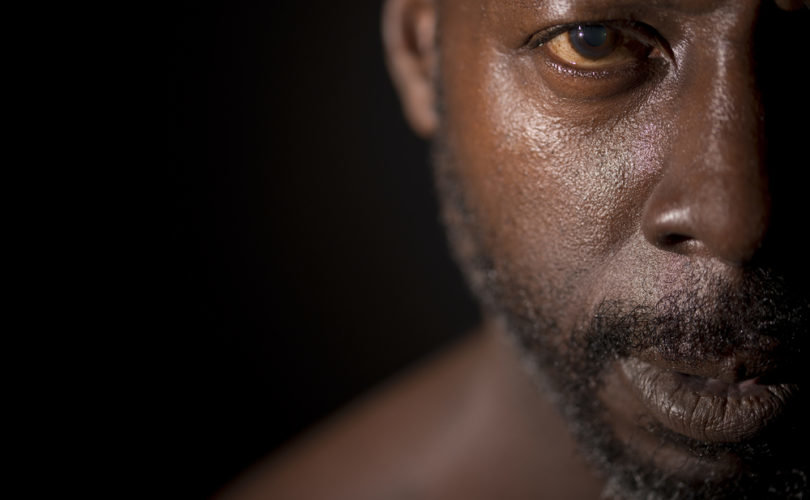 In an infographic released last week, one in six men who have sex with men (MSM) will contract HIV in their lifetimes, with half of black MSM likely to contract.John Gomez / Shutterstock

WASHINGTON, D.C., February 29, 2016 (LifeSiteNews) – In a first-of-its-kind analysis, the Centers for Disease Control (CDC) have concluded that one in two black men who are gay or bisexual will contract HIV.

In an infographic released last week, one in six men who have sex with men (MSM) will contract HIV in their lifetimes, with half of black MSM likely to contract. Black men are the most likely racial and gender demographic to contract HIV, with a five-percent chance of contraction.

“As alarming as these lifetime risk estimates are, they are not a foregone conclusion. They are a call to action,” said Jonathan Mermin, M.D., director of CDC's National Center for HIV/AIDS, Viral Hepatitis, STD, and Tuberculosis Prevention, in a press statement. “The prevention and care strategies we have at our disposal today provide a promising outlook for future reductions of HIV infections and disparities in the U.S., but hundreds of thousands of people will be diagnosed in their lifetime if we don't scale up efforts now.”

The CDC also calculated that the risk of being diagnosed with HIV is down from one in 78 a decade ago to one in 99 by 2013. People in the American South “are more likely to be diagnosed with HIV over the course of their lifetime than other Americans, with the highest risk in Washington, DC (1 in 13), Maryland (1 in 49), Georgia (1 in 51), Florida (1 in 54), and Louisiana (1 in 56),” said the new infographic.

How did the CDC get its data for this report?

“Previous estimates of the lifetime risk of receiving an HIV diagnosis were generated using surveillance data for 2004-2005 from 33 states that had implemented confidential, name-based HIV reporting at that time. However, these estimates did not include all jurisdictions in the nation, and some trends in HIV have changed since that time, such as a decrease in HIV diagnosis rates among women,” continued the spokesperson, explaining why this kind of report has never been published before.

“It is now also possible to determine lifetime risk of HIV diagnosis by risk group based on recently published estimates of the proportion of the United States population who are men who have sex with men (MSM), who comprise the majority of persons with HIV, as well as persons at risk for HIV due to injection-drug use or heterosexual contact. In addition, data on HIV diagnoses are now available from all 50 states and the District of Columbia.”

Why are blacks most susceptible?

According to the infographic, “studies have shown that African-Americans do not engage in riskier sexual behavior compared to Americans of other races/ethnicities” but also that “reasons for” blacks to have a “higher lifetime risk” of contracting HIV/AIDS “include higher prevalence within the community … lack of access to health care; poverty; and stigma.”

The spokesperson explained that “African-Americans represent 12% of the total U.S. population, but accounted for nearly half (44%) of HIV diagnosis in 2014 – and for more than one third of people living with HIV. Given the greater prevalence of HIV that already exists in many African-American communities – and because African-Americans are more likely to have sex with other African-Americans – men and women have an increased likelihood of being exposed to HIV with every sexual encounter.”

“Unsurprisingly, economic hardship also plays a significant role,” continued the spokesperson. “If you don't have the means to see a doctor, you may not get an HIV test or treatment until it's too late. Physicians have a central role in helping people know their risk for HIV infection as well as the options that are available to prevent it.”

Additionally, “those who can't afford the basics in life may end up in circumstances that increase their risk,” said the spokesperson, and “homelessness and unstable housing can hinder access to preventative health care, as well as treatment and prevention services for HIV-infected individuals.”

“Finally, fear and stigma can prevent African-Americans from getting tested (e.g. patients fear being identified as HIV-infected or physicians themselves are reluctant to offer the test for fear of offending them). This is not unique to the African-American community – fear and stigma are issues that remain too prevalent across this country and prevent too many, including African-Americans, from seeking the testing, treatment, and support they need.”

In 2015, a different CDC spokesperson described the effect of “stigma” as “a major barrier to HIV testing, condom use and use of other effective, available prevention strategies.  It also discourages those living with HIV from seeking the care and treatment they need to stay healthy and avoid transmitting HIV to others.”

The infographic refers to recommendations in the CDC's High Impact Prevention (HIP) methods for HIV prevention. Those methods include “HIV testing, ongoing care and treatment for people living with HIV, pre-exposure prophylaxis (PrEP, a daily anti-HIV pill for high-risk uninfected people) and condoms,” according to its website.

“These estimates are a sobering reminder that gay and bisexual men face an unacceptably high risk for HIV – and of the urgent need for action,” said Eugene McCray, M.D., director of the CDC's Division of HIV/AIDS Prevention. “If we work to ensure that every American has access to the prevention tools we know work, we can avoid the outcomes projected in this study.”

The CDC's HIP methods do not include abstinence from sexual activity. The CDC spokesperson told LifeSiteNews that “many of the materials you have seen are designed to target those who are most at risk of acquiring or transmitting HIV (including those who are sexually active)” with regard to popular YouTube and Pandora ads and other public safety warnings.

The spokesperson clarified that “while abstinence is the best way to prevent getting HIV from a sex partner, CDC must address all of the available prevention options to help individuals take control of their health, make informed choices, and reduce their risk for getting and transmitting HIV.”

The agency “has recently issued a comprehensive guide in which individuals can get information on all effective prevention strategies. Throughout the guide we reference that 'abstinence is the only 100% effective way to prevent HIV, other sexually transmitted diseases (STDs), and pregnancy.'”

“The purpose of High-Impact Prevention is to reach the right people, in the right places, with the right tools. The approach can change upon the local landscape,” concluded the spokesperson.

In 2013, a different spokesperson told LifeSiteNews that while a report on “HIV testing and Risk Behaviors” among MSM did not recommend abstinence as a method of HIV prevention, “we do know that not having sex is the most reliable way to avoid infection, and we include that as a prevention option in our media materials.”

That spokesperson pointed LifeSiteNews to an August 2013 graphic from the CDC that puts abstinence as the first of three measures to prevent MSM in relationships from contracting HIV.

The spokesperson who spoke to this reporter about stigma in 2015 explained that “when asked broadly how someone can protect themselves from infection, [the CDC] consistently indicate that abstinence is the only 100 percent effective strategy for preventing infection. And, again, for those who are sexually active, we provide information on how to reduce risk.”

Nearly two-thirds of gay men who know they have AIDS have sex without condoms: CDC report