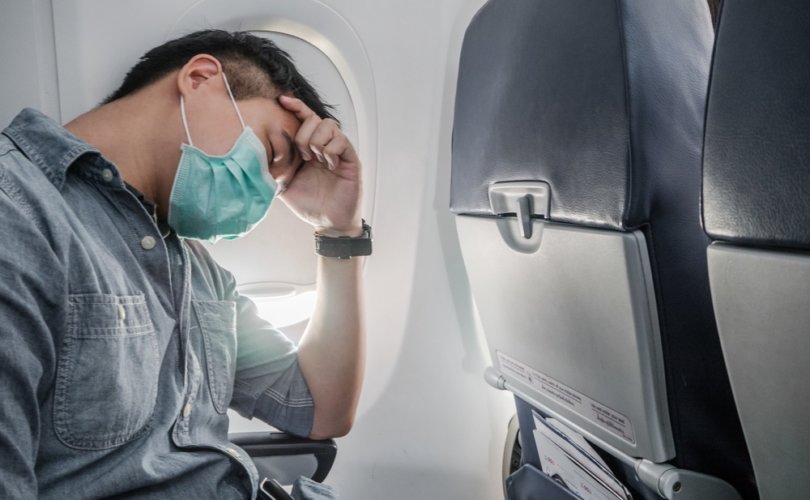 (LifeSiteNews) — After upping its monkeypox warning level last week, the U.S. Centers for Disease Control and Prevention (CDC) issued and then retracted an advisory that travelers, newly relieved of the federal COVID-19 mask mandate, once again mask up to guard against the new virus.

Last week, the CDC elevated its travel advisory level for monkeypox from Level 1 (Watch) to Level 2 (Alert), urging travelers to use “enhanced precautions” to avoid contracting or spreading the virus.

“Cases of monkeypox have been reported in Europe, North America, South America, Africa, Asia, and Australia,” the CDC wrote, adding that cases have been “reported among men who have sex with men” as well as “people who live in the same household as an infected person.”

RELATED: Historian admits homosexual lifestyles like his lead to higher risk of monkeypox

Travelers are advised to “[a]void close contact with sick people, including those with skin lesions or genital lesions” as well as avoid touching dead or alive wild animals, “eating or preparing meat from wild game,” and touching materials used by sick people.

In the initial advisory the CDC — which has been slammed during the COVID-19 pandemic for frequently changing its advice on masking, and pushing experimental mRNA drugs while concealing data on the risk and effectiveness of the injections — advised travelers to go back to wearing masks.

According to the federal agency, masking up “can help protect you from many diseases, including monkeypox.”

While saying the risk to the general public is low, the CDC is adding to the list of recommended precautions. https://t.co/VMr4PYtmFE

The recommendation drew strong backlash, with many pointing out that since monkeypox spreads via close and prolonged contact, particularly sexual contact between homosexual men, masks would seem to be unnecessary and useless.

“Still trying to comprehend the CDC guidance to wear masks to slow the spread of Monkeypox,” Dr. David Samadi wrote in response to the news.

“The disease is not airborne as of this moment,” he added. “What exactly are the masks supposed to do in that case?”

As of Tuesday, the mask recommendation has been removed from the CDC website.

After adding the warning a week or so ago, the @CDCgov now appears to have removed its previous urging for travelers to don masks to curb monkeypoxhttps://t.co/UVvMtOJE1T https://t.co/xiWW0FCm1z pic.twitter.com/EUPIe6nKZu

The updated warnings about the spread of monkeypox comes after just 31 cases of the virus have been reported in the United States to date, with zero reported deaths.

“They haven’t told me the level of exposure yet, but it is something that everybody should be concerned about,” the president told reporters.

READ: Biden, CDC warn Americans to be ‘concerned’ about spread of monkeypox

Meanwhile, though it stripped back its advisory that travelers mask up to guard against monkeypox, the CDC has not erased its recommendation that people infected with the virus wear surgical masks while quarantining to prevent spreading it to members of their household.