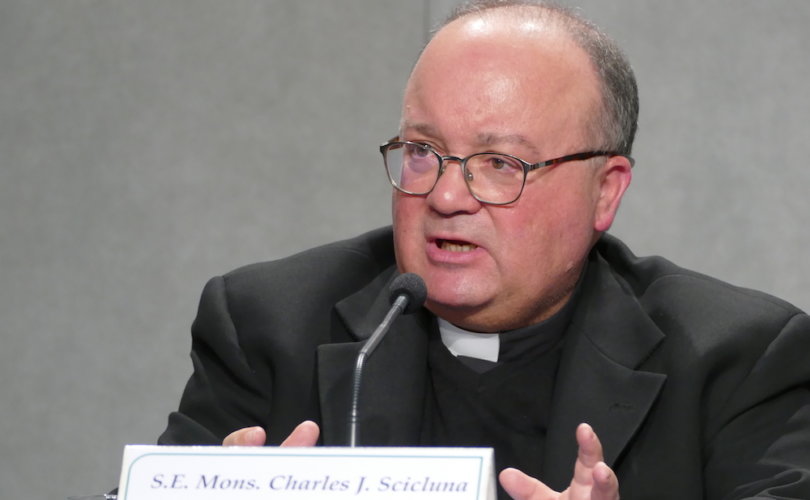 ROME, February 21, 2019 (LifeSiteNews) — A key organizer of the Vatican abuse summit now underway in Rome made comments today to reporters that seemed to deny the Church’s teaching that the homosexual inclination is a disorder.

Archbishop Charles Scicluna of Malta, who serves as adjunct secretary for the Congregation for the Doctrine of the Faith, said at a summit press briefing that both homosexuality and heterosexuality are “human conditions that we recognize, and that exist, but they aren’t something that really predisposes to sin.”

Archbishop Scicluna’s remarks came in response to a question from Italian journalist Sandro Magister. Magister asked the Maltese archbishop why the word “homosexuality” was completely absent from the summit’s opening day — particularly in light of the fact that over 80 percent of clerical abuse victims were post-pubescent boys.

The word “homosexuality” did not in fact appear in either Pope Francis’s opening address, the 21 points of reflection he distributed to summit participants, or in the introductory talks by Filipino Cardinal Luis Antonio Tagle, Archbishop Scicluna, and Columbian Cardinal Rubén Salazar Gómez.

“Was the absence of the word ‘homosexuality’ an inadvertent and random absence or is it a deliberate absence?” Magister asked Scicluna.

The archbishop — who is widely respected for investigating clerical sex abuse and plays a key role in the summit’s organizing committee — responded by saying that “to generalize about categories of persons is never legitimate.”

“We have individual cases, we don’t have categories of people,” he said.

“You spoke about one category, someone else could speak about heterosexuality,” he said to Magister. “These are human conditions that we recognize, that exist. But they aren’t something that really predisposes to sin.”

“Concupiscence” takes on the “personal inclination of the criminal or the one accused,” Scicluna acknowledged. “But I would never dare point to a category as one that has the propensity to sin. We all have the same propensity.”

These remarks seem both to equate the natural inclination to marital relations with the disordered tendency towards homosexual acts, and to imply that one is no more or less sinful than the other.

Such an assertion would contradict the Catechism of the Catholic Church, which — based on natural law, scripture and tradition — teaches that homosexual acts are “acts of grave depravity” (n. 2357), and that the inclination is “objectively disordered” (n. 2358) and cannot arise from a “genuine affective and sexual complementarity” (n. 2357).

While it is true that one should not “generalize about categories of persons,” to date no one has claimed in Vatican press briefings that because someone has homosexual tendencies, they will necessarily abuse minors.

But it is also true that the clerical sex abuse and coverup crisis — at least in the United States — was born out of a homosexual subculture that for decades spread like a cancer through seminaries, allowing men like Theodore McCarrick to corrupt “generations of seminarians and priests,” as Archbishop Carlo Maria Viganò said in his original testimony.

And while much has been done to restore US seminaries to health, the problem is far from eradicated worldwide. Echoing key aspects of the US crisis, last summer fifty seminarians in Honduras protested against what they say is a widespread and entrenched pattern of homosexual practice in the Tegucigalpa’s major seminary, whose head is one of the Pope’s key advisors, Cardinal Oscar Rodriguez Maradiaga.

“Heterosexual seminarians are scandalized and really depressed,” and “many are considering leaving the seminary,” one seminarian told the National Catholic Register in July, in comments eerily reminiscent of men who passed through US seminaries in past decades.

Many observers therefore see Archbishop Scicluna’s remarks as an attempt by summit organizers to systemically avoid the issue of homosexuality. In doing so, however, many believe they are failing to address one of the root causes of clerical sex abuse and coverup.

Writing after Thursday’s press conference, Sandro Magister said Scicluna’s response was also a sure sign that the Feb. 19 open letter of Cardinal Raymond Burke and Cardinal Walter Brandmüller — calling on the presidents of bishops conference attending this week’s meeting to “raise their voices” against moral corruption of the Church — has “fallen on deaf ears.”

One informed source also told LifeSite: “Pope Francis said in his opening discourse that we need to be concrete. But to be concrete, we have to begin with the facts. And the facts show that 80 percent of abuse was homosexual and involved post-pubescent boys.”

In God’s divine providence, the Vatican summit on clerical sexual abuse coincides with the Feb. 21 (new calendar) and Feb. 23 (old calendar) liturgical feast of St. Peter Damian — Bishop, Confessor and Doctor of the Church. This 11th century monk dedicated himself completely to reforming the Church of his time, which was deeply corrupted by sins of sodomy. Many are therefore praying that St. Peter Damian might inspire at least one bishop at this week’s meeting to courageously stand up and break the wall of silence.