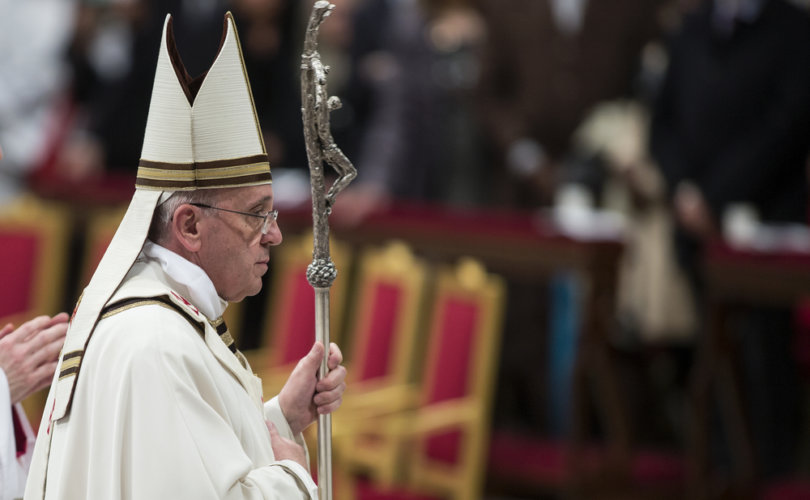 VATICAN CITY, June 4, 2018 (LifeSiteNews) — Just one month after directing the bishops of Germany to reach a “unanimous” decision on whether a Protestant spouse married to a Catholic may receive the Holy Eucharist, Pope Francis has changed course and blocked the German bishops’ intercommunion proposal.

In a letter sent to German Cardinal Reinhard Marx “with the explicit approval of the Pope” by Archbishop Luis Ladaria, S.J., prefect of the Congregation for the Doctrine of the Faith, the Holy Father has halted the publication of the German bishops’ intercommunion document that ignited the controversy.

In the May 25 missive, Archbishop Ladaria informs Cardinal Marx, president of the German Bishops’ Conference, that he has briefed Pope Francis about a May 3 meeting between opposing factions of the German bishops and high-level Vatican officials regarding the controversial proposal.

The summit was called after seven German bishops sent a letter to the Vatican expressing their opposition to a Feb. 20 vote by the German bishops’ conference to allow a Protestant spouse to receive the Eucharist if, after having made a “serious examination” of conscience with a priest or another person with pastoral responsibilities, he or she “affirms the faith of the Catholic Church,” wishes to end “serious spiritual distress,” and has a “longing to satisfy a hunger for the Eucharist.”

In his May 25 missive, Ladaria then informs Marx that the text proposed by the German bishops’ “raises a number of significant issues.” He adds that “the Holy Father has therefore come to the conclusion that the document is not ready to be published.”

1. The question of admitting evangelical Christians in interfaith marriages to Communion is a topic which touches on the faith of the Church and has relevance for the universal Church.

2. The matter effects ecumenical relations with other Churches (e.g. the Orthodox) and ecclesial communities which should not be underestimated.

3. The decision effects the interpretation of Church law, specifically canon 844, that allows Protestant Communion only in cases of “grave necessity” [imminent death]

Ladaria further informs Marx that the “competent disasteries” of the Holy See have been tasked with “producing a timely clarification of these questions at the level of the universal Church.” This indicates that the question of intercommunion is no longer being left to the German bishops’ conference, as Pope Francis has originally directed — a decision that Cardinal Willem Jacobus Eijk of Holland called “completely incomprehensible.”

Copied into Archbishop Ladaria’s letter were five German bishops, including Cardinal Rainer Woelki of Cologne and Bishop Rudolf Voderholzer of Regensburg, vice-president of the German bishops’ conference’s doctrinal commission and the only German member of the Congregation for the Doctrine of the Faith. The two bishops are among seven signatories of the letter to the Vatican who oppose the proposal and the pastoral handout approving Intercommunion.

Also copied were three supporters of the proposal: Bishop Karl-Heinz Wiesemann of Speyer; Bishop Gerhard Feige of Magdeburg, president of the bishops’ commission for ecumenism; and Bishop Felix Genn of Münster.

Here below is a LifeSiteNews translation of Archbishop Ladaria’s letter to Cardinal Marx.

Congregation for the Doctrine of the Faith

Palace of the Holy Office

To His Eminence, the Most Reverend

Archbishop of Munich and Freising

President of the German Episcopal Conference

Your Eminence, Most Illustrious lord president!

At the end of our fraternal conversation of May 3, 2018, regarding the document “Mit Christus gehen…” [“Walking with Christ. On the path of unity. Interfaith marriages and common participation in the Eucharist. A pastoral handout of the German Bishops’ Conference”] we jointly established that I would inform the Holy Father about the meeting.

Already at an audience on May 11, 2018, I spoke with Pope Francis about our meeting and I gave him a summary of the conversation. On May 24, 2018 I again discussed the matter with the Holy Father. Following these meetings, and with the explicit consent of the Pope, I would like to bring to your attention the following points.

1. The many ecumenical efforts of the German Bishops’ Conference, especially its intense collaboration with the Council of the Evangelical Church of Germany, deserve recognition and appreciation. The joint commemoration of the Reformation in 2017 has shown that in recent years and decades a basis has been found which allows us to bear witness together to Jesus Christ, the Savior of all men, and to work together in an active and decisive way in many areas of public life. This encourages us to move forward with confidence on the path to ever deeper unity.

2. Our conversation on May 3, 2018 has shown that the text of the handout raises a number of significant issues. The Holy Father has therefore come to the conclusion that the document is not ready to be published. The main reasons for this decision can be summarized as follows:

a. The question of admitting evangelical Christians in interfaith marriages to Communion is a topic which touches on the faith of the Church and has relevance for the universal Church.

b. This question has effects on ecumenical relations with other Churches and ecclesial communities which should not be underestimated.

c. The matter concerns the law of the Church, especially the interpretation of canon 844 of the Code of Canon Law. Since in some sectors of the Church there are open questions in this regard, the competent dicasteries of the Holy See have already been charged with producing a timely clarification of these questions at the level of the universal Church. In particular, it seems appropriate to leave the judgment on the existence of an “imminent grave necessity” to the diocesan bishop.

3. It is a great concern to the Holy Father that the spirit of episcopal collegiality remain alive in the German Episcopal Conference. As the Second Vatican Council underlined, “episcopal bodies of today are in a position to render a manifold and fruitful assistance, so that this collegiate feeling may be put into practical application” (Dogmatic Constitution Lumen gentium n. 23).

In bringing this to your attention, I extend fraternal greetings and best wishes for every blessing.

Yours in the Lord

His Eminence, the Most Reverend