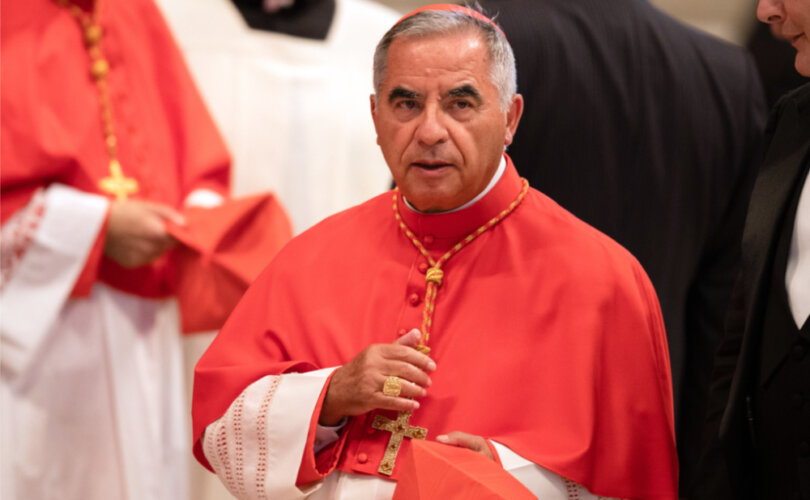 Cardinal Angelo Becciu at the August 2022 Consistory of Cardinals. Mazur/cbcew.org.uk/Flickr

VATICAN CITY (LifeSiteNews) — In the midst of a trial for financial corruption, Cardinal Angelo Becciu met with Pope Francis last weekend, who reportedly “encouraged” the scandal-ridden cardinal and told him to continue taking part in “cardinals’ celebrations.”

Having been observed heading toward Pope Francis’ residence on November 26, Cardinal Becciu told reporters that he had indeed met the Pontiff. The meeting was strictly private and was not included in the Holy See Press Office’s daily bulletin.

Speaking to ANSA on Monday, Becciu said he was “received in audience” by Pope Francis on Saturday afternoon, stating that it was “as always, a cordial meeting.”

Only days before, as part of Becciu’s ongoing trial for embezzlement and abuse of office while No. 2 in the Secretariat of State, the courtroom had heard audio of a telephone call between Becciu and Francis. An un-named individual in a room with Becciu had secretly recorded the call in the summer of 2021.

According to Italian news site JustOut, the recording began with Becciu’s niece asking if he was ready, to which he replied in the affirmative, before dealing and speaking to Francis on speakerphone.

In the recorded call, Becciu asked Francis to confirm authorization of payments for the ransom of a kidnapped nun in Africa in the amount of 350,000 euros to the British firm, Inkerman Group — which was helping secure the ransom — and 500,000 euros as the ransom.

Becciu had hired “security adviser” Cecilia Marogna as a liaison between the Vatican and the Inkerman Group, transferring the ransom money to Marogna as the intermediary.

However, Marogna, who joins Becciu on trial for embezzlement, used nearly half the money to buy luxury goods and was consequently arrested by Italian financial police after the Vatican issued an international arrest warrant through Interpol.

According to lawyers who heard the recorded call, Francis was “perplexed and confused” by Becciu’s call, and requested the cardinal send a written note. The call was made only days before Becciu’s trial started in 2021.

However, Becciu attested to reporters that the newly revealed phone recording had not negatively affected his November 26 meeting with Francis. “As well as supplying him with the necessary clarifications which I deemed necessary, I showed him and renewed to him my absolute devotion,” Becciu said.

According to Becciu, Francis also renewed his support for the cardinal. “He encouraged me renewing an invitation to me to continue to take part in cardinals’ celebrations.”

Becciu is currently standing trial alongside nine other people connected to the financial scandal surrounding a Vatican property investment in London that he authorized. The cardinal “personally authorized” transactions and allegedly kept them off official Vatican ledgers in order not to draw the attention of Cardinal George Pell, then-Prefect of the Secretariat for the Economy.

After the Vatican initiated its own corruption investigation into Becciu’s dealings in late 2020, Francis accepted Becciu’s resignation, when the cardinal renounced his privileges as a cardinal – while retaining the title – and resigned from his post as Prefect for the Congregation for the Causes of Saints.

Becciu was then indicted for corruption in July 2021 by the Vatican Tribunal along with nine others. He was personally charged with “embezzlement and abuse of office, also in collaboration, as well as subornation.”

However, Francis has been more public in his support for the cardinal in recent months. After suggesting it to the media, Becciu was publicly rehabilitated by Pope Francis at the August Consistory of cardinals.

But in light of the recently revealed phone call, the Vatican’s chief prosecutor has stated he is launching a new charge against Becciu, that of criminal conspiracy.