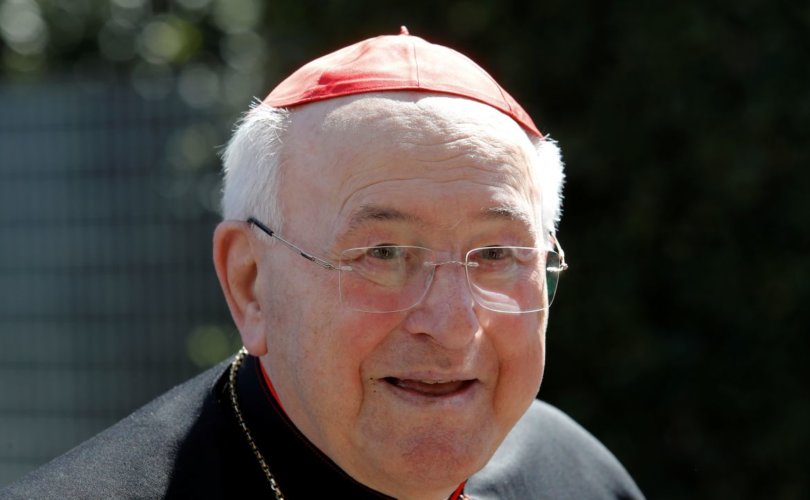 (L’Espresso) – On August 29, a consistory saw the cardinals gathered with Pope Francis. It was behind closed doors, but above all it was broken down, at the Pope’s behest, into linguistic groups, thus preventing direct dialogue among all.

Such dialogue did in fact happen in the now long-gone consistory of February 2014, the last full-fledged consistory convened by Francis, in view of the “Synod on the Family” and on the “vexata quaestio” of Communion for the divorced and remarried. That consistory that proved so frank in criticizing the arrangement the Pope wanted as to induce him to rule out, from then on, any likewise free and outspoken convocations of cardinals.

Cardinal Walter Brandmüller prepared remarks for the August 29 and 30 consistory of cardinals, which he was not allowed to deliver, published in full on this page (originally found on Settimo Cielo).

Brandmüller, 93, a German and lifetime Church historian who from 1998 to 2009 served as president of the pontifical committee of historical sciences, is not a newcomer to proposals regarding the role of the cardinals in the Catholic Church. Less than a year ago he had already advanced on Settimo Cielo a hypothesis of reform for the election of popes, in his judgment more in keeping with the historical origins and theological foundations of the cardinalate.

— Article continues below Petition —
PETITION: We won't give any money to liberal bishops who attack the Faith
Show Petition Text
10242 have signed the petition.
Let's get to 12500!
Thank you for signing this petition!
Add your signature:
Show Petition Text

But at this consistory, the remarks he prepared were aimed above all at the relationship that should bind to the Pope the cardinals who in fact have been silenced by him, as opposed to what should happen primarily on the truths of faith and morals.

Below follows the full text Brandmüller had prepared to be delivered at Saturday’s consistory:

Not imposed silence, but ‘aperitio oris’

The convocation of a consistory after such a long time prompts a reflection on the nature and task of the cardinalate, especially in the current circumstances. It must also be emphasized that the cardinals are not only members of the conclave for the election of the Supreme Pontiff.

The true duties of the cardinals, regardless of their age, are formulated in canons 349 and following of the code of canon law. It reads: “The cardinals assist the Roman Pontiff either collegially when they are convoked to deal with questions of major importance, or individually when they help the Roman Pontiff through the various offices they perform, especially in the daily care of the universal Church.” And they “especially assist the supreme pastor of the Church through collegial action in consistories” (canon 353).

In ancient times this function of the cardinals found symbolic and ceremonial expression in the rite of “aperitio oris,” of opening the mouth. In fact, it meant the duty of frankly expressing one’s own conviction, one’s advice, especially in consistory. That frankness – Pope Francis speaks of “parresía” – which was particularly dear to the apostle Paul.

For now, unfortunately, that frankness is being replaced by a strange silence. That other ceremony of the closing of the mouth which followed the “aperitio oris” did not refer to the truths of faith and morals, but to official secrets.

Today, however, there is a need to emphasize the right and indeed the duty of cardinals to express themselves clearly and with frankness precisely when it comes to the truths of faith and morals, of the “bonum commune” of the Church.

The experience of recent years has been entirely different. At the consistories – convened almost exclusively for the causes of saints – forms were distributed to request speaking time, followed by obviously spontaneous remarks on any sort of topic, and that was it. There has never been a debate, an exchange of arguments on a specific topic. Obviously a completely useless procedure.

A suggestion presented to the cardinal dean to communicate a topic for discussion in advance so that remarks could be prepared went unanswered. In short, for at least eight years the consistories have ended without any form of dialogue.

The primacy of the successor of Peter, however, in no way excludes a fraternal dialogue with the cardinals, who “are obliged to cooperate assiduously with the Roman Pontiff” (canon 356). The more serious and urgent the problems of pastoral governance, the more necessary is the involvement of the college of cardinals.

When Celestine V, in 1294, became aware of the particular circumstances of his election and wanted to renounce the papacy, he did so after intense conversations and with the consent of his electors.

A completely different conception of the relationship between pope and cardinals was that of Benedict XVI, who – a unique case in history – made his resignation from the papacy, for personal reasons, without the knowledge of the college of cardinals that had elected him.

Until Paul VI, who increased the number of electors to 120, there were only 70 electors. This near doubling of the electoral college was motivated by the intention of accommodating the hierarchy of countries far from Rome and honoring those Churches with the Roman purple.

The inevitable consequence was that cardinals were created who had no experience of the Roman curia and therefore of the problems of the pastoral governance of the universal Church.

All this has serious consequences when these cardinals of the peripheries are called to elect a new pope.

Many if not the majority of the electors do not know each other. Nonetheless, they are there to elect the pope, one from among them. It is clear that this situation facilitates the operations of groups or classes of cardinals to favor one of their candidates. In this situation the danger of simony in its various forms cannot be excluded.

In the end, it seems to me that serious reflection should be given to the idea of limiting the right to vote in conclave, for example, to cardinals residing in Rome, while the others, still cardinals, could share the “status” of cardinals over eighty.

In short, it seems desirable that the office and competence of the college of cardinals be updated.

Reprinted with permission from L’Espresso.