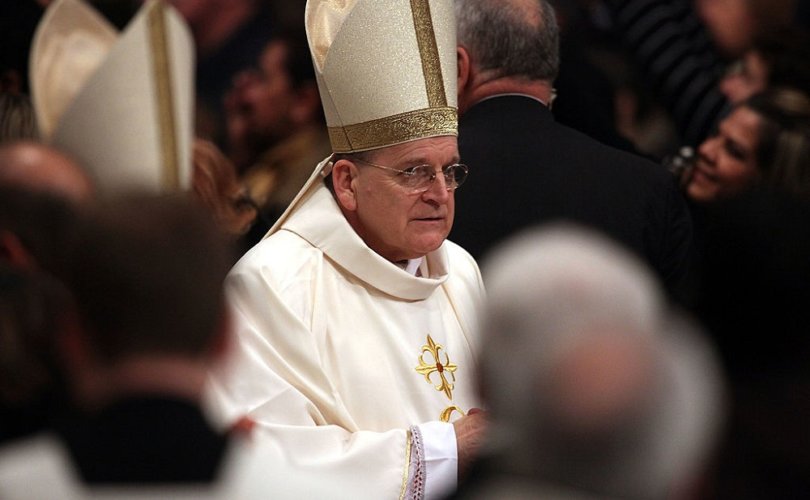 Cardinal Burke is the former prefect of the Supreme Tribunal of the Apostolic Signatura, the highest Vatican court. Before that, he was the archbishop of St. Louis, Missouri and the bishop of La Crosse, Wisconsin.

Already in 2004, then-archbishop Burke had warned Democratic presidential candidate John Kerry not to present himself for Communion.

According to canon law (can. 915), “Those who have been excommunicated or interdicted after the imposition or declaration of the penalty and others obstinately persevering in manifest grave sin are not to be admitted to holy communion.”

A politician supporting abortion or homosexuality is generally seen by faithful Catholics as “obstinately persevering in manifest grave sin.”

Current Democratic presidential candidate Joe Biden has repeatedly touted his Catholic faith, even though his platform is radically pro-abortion.

In a campaign video released earlier this year, he said, “I go to Mass, and I say the rosary. I find it to be incredibly comforting.”

Last year, Biden had told a PBS interviewer that Pope Francis gives him Communion after he was denied Communion by a Catholic priest because of his public support for abortion.

In July, Biden published his Agenda for Women, promising to restore domestic and overseas funding to the abortion industry.

He dedicated one section to “Reproductive Health,” which is generally a reference to abortion. The former vice president under President Barack Obama said, among other things, he “will work to codify Roe v. Wade, and his Justice Department will do everything in its power to stop the rash of state laws that so blatantly violate Roe v. Wade.”

Roe v. Wade is the 1973 Supreme Court ruling essentially imposing abortion across the country under the guise of a woman’s right to privacy. Many states passed legislation trying to limit the widespread killing of unborn babies. One form of legislation is so-called heartbeat bills, which prohibit abortions as soon as the unborn baby’s heartbeat can be detected after roughly six weeks of pregnancy.

One of Biden’s leading contenders to become vice president, Democratic California senator Kamala Harris, was also criticized by Burke for her anti-Catholic bias on display during the confirmation process for U.S. district judge Brian Buescher, a member of the Catholic fraternal organization the Knights of Columbus.

Referring to homosexual “marriage,” Harris also asked, “Were you aware that the Knights of Columbus opposed marriage equality when you joined the organization?”

“Have you ever, in any way, assisted with or contributed to advocacy against women’s reproductive rights?” another question went.

Cardinal Burke, in the Fox News interview, was dismayed by these questions. “This is completely unacceptable,” he said.

“I mean, I think you’re an everyday citizen — whether you’re a Catholic or not, you need to look at that kind of statement for what it is and say, ‘This isn’t a person who I want to be the leader of my nation,’” Burke added.

Burke briefly talked about sexual abuse among clergy, pointing out that the majority of cases were of a homosexual nature.

“We have to come clean on who was responsible for these situations,” he said. “The far greater part of them have been homosexual acts with adolescents or young men. And I’m not homophobic, but we cannot have this active homosexual activity in the priesthood.”