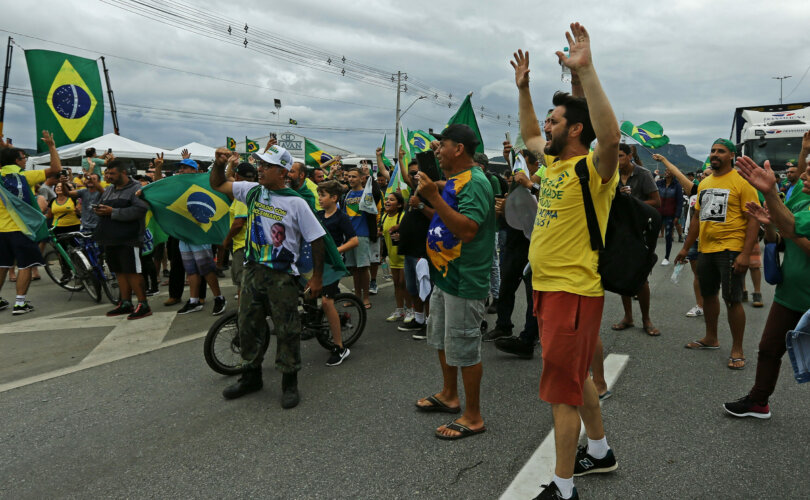 (LifeSiteNews) — Cardinal Raymond Burke and Bishop Athanasius Schneider have issued messages of support for the massive protests in Brazil over potential election fraud.

“I encourage all in the government of Brazil to take very seriously the responsibility in the present situation, and I will be praying very much that they see the wisdom and strength to do what is right at this critical moment,” Burke said in an interview with the St. Boniface Institute, an Austrian Catholic organization led by co-founder Alexander Tschugguel.

Burke appears to share the concerns of the millions of Brazilians who are taking to the streets daily. The Cardinal was asked the following question in the interview:

Your Eminence, for six weeks now, millions of citizens have been demonstrating and camping out in front of the army barracks all over Brazil to protest against the proposed communist takeover facilitated by rigged elections. Do you have a message for these courageous people and the Brazilian government?

Burke replied: “Certainly what you are saying is true.”

“I offer every encouragement not only to the people but to those who are responsible presently for the government in Brazil that they will act according to God’s will, according to what is just and right in order to serve the good of all the people of Brazil,” the American Cardinal continued.

— Article continues below Petition —
URGENT: Say No to the UK introducing a “right” to abortion
Show Petition Text
10634 have signed the petition.
Let's get to 12500!
Thank you for signing this petition!
Add your signature:
Show Petition Text

Bishop Schneider, who spent several years as a priest in Brazil, gave his message of encouragement to the protestors in Portuguese. It was published on the St. Boniface Institute’s YouTube channel.

“People of goodwill all over the world know about your situation,” Schneider said. “We Catholics are praying for our Brazilian brothers and sisters. I want to encourage all Brazilians! Our Lady is with you; she is the most powerful force in the world.”

Commenting on the lack of legacy media coverage that the massive protests in the South American country received, Schneider stated that “[m]ainstream media has abandoned you at this difficult time after your election. But honest people all over the world know about your situation.”

“You may now — for a short period — be suffering oppression and persecution from dictatorial forces, but God will not abandon Brazil. Brazil belongs to Christ, to Our Lady.”

Tschugguel himself also sent a video message to the people in Brazil, saying that “you who are fighting to save your country from a communist takeover are not alone.”

#BrazilianSpring 🇧🇷
My message to the brave Brazilian people fighting for freedom and truth.
May God guide you!

“There are many people outside of Brazil, here in Austria, Germany, France, Italy, Hungary, the United States, and many other countries who know what you are going through, who support your fight, who pray for you, and who are hoping that you will win and the communist will not take power,” Tschugguel continued.

“At our weekly rosary rallies here in Vienna, we have been praying publicly for your intentions for weeks now. We know that your election was rigged. We know about the massive fraud. The truth about Brazil is now spreading throughout the world.”

“Your country now has the chance to show the world that if the people stand firm, evil can be defeated,” the Austrian Catholic stated. “You can prove to everyone that no tyrant stands a chance if a people strengthened by the Grace of God Almighty simply won’t back down.”

These messages of encouragement are a response to what some are calling the biggest political protest in history. Tens of millions of Brazilians have taken to the streets in nearly every city in the country for more than 30 days straight to oppose what they say was an election result stolen from President Jair Bolsonaro. Some believe the military may intervene to prevent the certification of the supposed winner of the race, socialist Lula da Silva.

Following reports of his alleged 50.9%-49.1% loss to Lula, President Bolsonaro filed a lawsuit with the Superior Electoral Court claiming massive voting machine irregularities. However, the left-wing Justice Alexandre de Moraes tossed out the case. De Moraes proceeded to censure conservatives who questioned the validity of the results on social media. He also froze the bank accounts of truck drivers who blocked hundreds of roads across the country. Bolsonaro has addressed the public twice since the election was held but has not expressly conceded the race. According to Reuters, the head of the US Central Intelligence Agency told Bolsonaro last year that he should not challenge the results of the race.

Investigative journalist Matthew Tyrmand recently told Steve Bannon on his War Room podcast that “They’re going to have to execute some form of 142-driven Marshal Law.”

Section 142 of Brazil’s constitution empowers the president to direct the military to bring law and order to the country when such a need arises.

Tyrmand said on Tucker Carlson Tonight that the military “has a special role in the Brazilian constitution,” because “they are the ones to adjudicate separation of power disputes.”

Tyrmand stated that he believes the military will take power in this situation: “It looks like this will be coming to a head.”