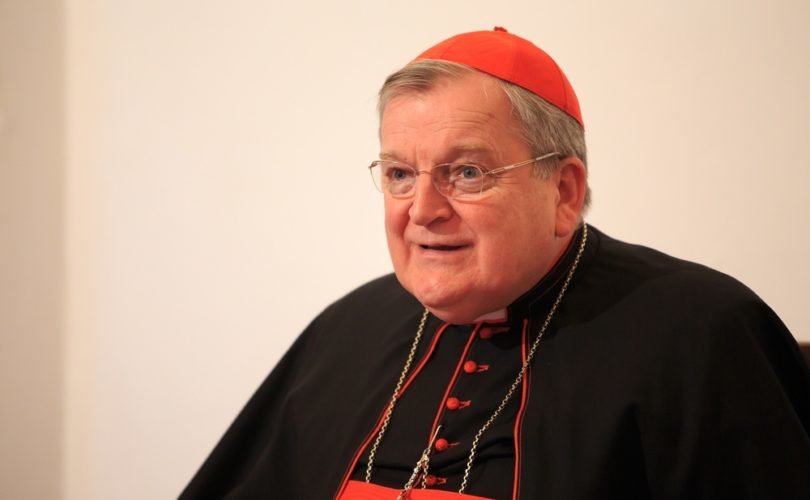 SAN DIEGO, California, May 27, 2020 (LifeSiteNews) — “Distortions” of the sacraments that took place in churches during the coronavirus lockdown, and that are taking place as they open up again, could result in Catholics losing a sense of the sacred, says Cardinal Raymond Burke.

“The sacred in the highest sense, in the sense that we see and we experience, the sacred is Christ Himself in our midst acting to sanctify us,” he told Thomas McKenna of Catholic Action for Faith and Family in a May 24 interview.

“But we have to understand that it's Christ who is acting. It’s not something we invented, you know, where we can manipulate the sacred to fit our circumstances.”

However, with public Masses cancelled during the coronavirus pandemic, such manipulations have taken place, suggested Burke, a canon lawyer and well-known advocate of orthodoxy.

One such instance is the “virtual” First Holy Communion Mass planned by a parish priest in Ireland, who “gave the Sacred Hosts to their parents in advance” to take home and give to their child while watching the live-streamed Mass.

“This is very bad,” Burke said.

“These children lose all sense of the fact that the Holy Communion comes from the sacrifice in which they are taking part, united themselves to Christ.”

Another instance is priests in Italy being required to “give out Holy Communion wearing the plastic gloves and with the mask on their face.”

Burke also referenced the Italian bishops’ proposal that priests could leave consecrated Hosts in plastic bags for Catholics to pick up, a practice that La Nuova Bussola Quotidiana reported in May had already been adopted in some parts of Germany.

“We can’t be putting Holy Communion, the Sacred Host, in a plastic bag, or a box to be, people taking home with them,”  he said.

“These are distortions of the sacramental sign. And they simply can't be permitted.”

Burke also made reference to an American bishop’s short-lived proposal that nurses administer oils for the anointing of the sick to coronavirus patients so priests wouldn’t be exposed to the disease.

“We pray always for physical healing, but we pray at the same time for that spiritual strength to embrace whatever illness the person has and to unite it to the suffering of Christ,” he said.

“And to suggest that this could be done by a person other than a priest is a manifest loss of faith in the sacrament itself.”

Burke said he fears that the cancellation of public Masses has caused an erosion of Catholics’ belief in the centrality of the Eucharist and of their obligation to attend Mass on Sunday.

He has read reports of “even good people who’ve said, well, in a certain way they preferred taking part in Mass at home, in the comfort of their home, with the television,” the cardinal observed.

“But this isn’t participating in Holy Mass. It’s a holy thing to watch the Mass and to be in awe of it, but it’s not participation. Christ isn’t present on the television screen. And He’s not in your home by that means,” he said.

Catholics who know what the Mass is will return “very wholeheartedly to fulfilling the Sunday obligation to assist at Holy Mass,” Burke observed.

“But for those who may not be so catechized, I fear very much that the easy way in which the churches were closed, and (that) it was said that the bishops were dispensing the people from the Sunday Mass obligation for this long period of time, could give the people the impression that Sunday Mass is just one more practice in the church, which the bishop can dispense.”

Indeed, Archbishop Víctor Manuel Fernández of La Planta, Argentina, a papal ghostwriter and confidant of Pope Francis, suggested in an April interview that the obligation to go to Mass on Sundays and Holy Days “is not indispensable” and “is something that could fall.”

But the Church does not have the authority to drop the obligation to go to Mass on Sunday, which is a commandment from God, Burke pointed out. When it has been impossible during the current crisis for the faithful to attend Mass, the obligation does not bind them, but the obligation remains.

“It's not correct to say that the bishop dispenses the faithful from the obligation of Sunday Mass, because Sunday Mass is a response to the Third Commandment. This is divine law,” he emphasized.

It’s clear in the wake of what coronavirus pandemic lockdowns have wrought, or brought to light, that Catholics need to be catechised on core beliefs of their faith.

“We're going to have to restore very much the catechesis with regard to the Eucharist, and the whole sense of the Sunday Mass obligation, because I can see that there's been a certain erosion,” he said.

Burke also criticized the Vatican’s secret accord with China, noting that bishops faithful to the Church who have persevered as members of the underground Church despite persecution are now being asked to sign an oath of loyalty to the Communist Party of China, which regards the only acceptable religion as China itself.

He urged people to heed the messages of Our Lady at Fatima.