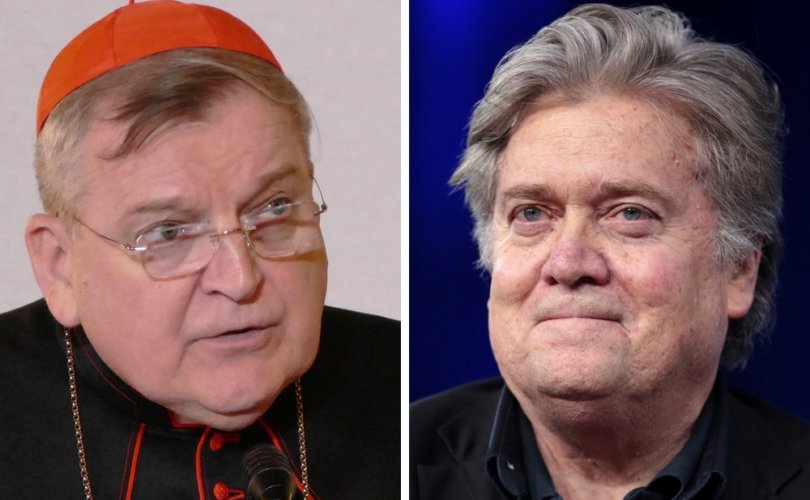 June 26, 2019 (LifeSiteNews) – Cardinal Raymond Burke issued a press release yesterday in which he distanced himself from media and political strategist Steve Bannon.

“I disagree completely with a number of Mr. Bannon’s statements regarding the doctrine and discipline of the Roman Catholic Church,” said Cardinal Burke, patron of the Sovereign Military Order of Malta, in his release in which he also announced his decision to cut ties with a Rome-based institute involved with Bannon.

“I have been involved with the Dignitatis Humanae Institute (DHI) for some years because of its work to support Christians in public life who act with respect for the moral law and, therefore, promote the common good,” said Burke, adding that “effective  immediately” he has “terminated any relationship with” DHI.

Explaining his decision to resign as honorary president of DHI, Cardinal Burke said that the institute has “become more and more identified with the political program of Mr. Bannon.” “While I have urged the Institute to return to its original purpose, it has not done so.”

For the record, Cardinal Burke acknowledged having met with Bannon but not working with him.

“I have never worked with Mr. Bannon in his organization and am not presently doing so. I have met with him on occasion to discuss Catholic social teaching regarding certain political questions, but I have no part in his organization,” said Burke.

“In meeting with him, as in meeting with other political leaders, I have tried to fulfill my mission as a priest to teach the faith and morals for the common good,” he added.

While Burke expressed in his letter of resignation his dissatisfaction with the direction the institute was taking, what brought the matter to a head was Bannon’s plan to make use of the work of a homosexual activist to make a film about the infiltration of homosexuals into the Vatican.

LifeSiteNews reported on June 24 that Bannon had met last month with French sociologist and homosexual activist Dr. Frédéric Martel, author of the controversial book In the Closet of the Vatican, where they discussed making such a film.

Reported LifeSiteNews: “After several lengthy telephone conversations, Bannon and Martel met in person on May 19 in Paris, at the five-star Bristol Paris Hotel, upon Mr. Bannon’s initiative. The meeting was organized with the help of Benjamin Harnwell, who works with both Bannon and Raymond Cardinal Burke, according to a small May 30, 2019 report on this meeting in the French magazine Valeurs Actuelles.”

LifeSiteNews decided to pull the report less than an hour after publication due to a lack of clarity in the report regarding some comments we had received.

Cardinal Burke took issue with being mentioned in the report as being connected to Harnwell who works with Bannon.

“I have been made aware of a June 24th LifeSiteNews online article—now removed—entitled ‘Steve Bannon hints at making film exposing homosexuality in Vatican,’ in which the insinuation is made that somehow, through my association with Mr. Benjamin Harnwell of the Dignitatis Humanae Institute, I was involved in a meeting between Mr. Bannon and Mr. Frédéric Martel, author of the book, In the Closet of the Vatican, to promote a film version of Mr. Martel’s book,” he said. “LifeSiteNews made no contact with me to verify my possible involvement.”

LifeSiteNews’ John-Henry Westen, co-founder and editor-in-chief, stated in a video yesterday that the “clumsily worded sentence may have been read by some as indicating that Cardinal Burke had something to do with the meeting between Bannon and Martel.”

“We did not intend to convey that at all and pulled the story based on concerns over lack of clarity. We did not think to contact Cardinal Burke to verify the story because it had nothing to do with him,” he said.

“We regret any harm to His Eminence that may have come from our mentioning his name,” Westen added.

Burke, in his press release was particularly adamant about opposing the film project proposed by Bannon. “I do not, in any way, agree with Mr. Bannon’s assessment of the book in question,” said Burke. “Furthermore, I am not at all of the mind that the book should be made into a film.”