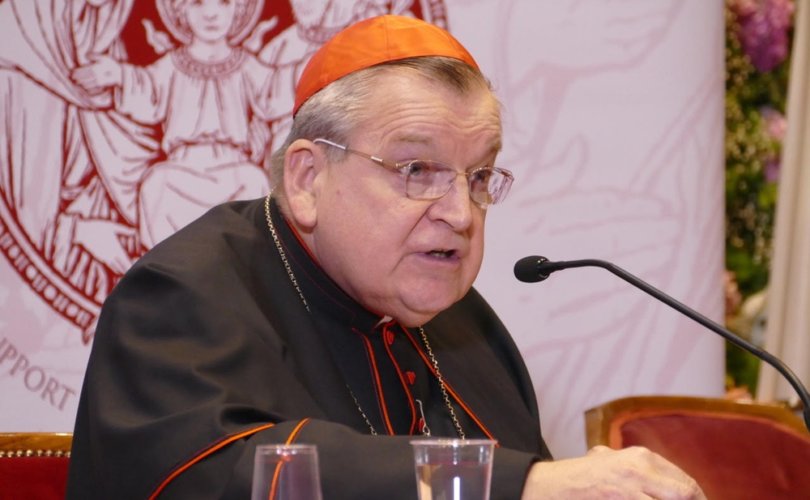 ROME, November 6, 2018, (LifeSiteNews) – Cardinal Raymond Burke did not mince words in a recent address to young people gathered in Rome as he described as “diabolical” the current “situation” of the Church seemingly trying to “accommodate” herself to the world and its “culture of death.”

The world and the culture are spiraling in decline with attacks on life, the integrity of the family, and on the freedom of conscience, and so it needs the Church to speak the truth “strongly and clearly” like never before, he said.

“And yet, she gives the impression of trying to approach this culture, which is truly a culture of death, and somehow accommodate herself to the culture,” he continued.

“This in my judgment is really a diabolical situation,” he added.

Burke described at the Voice of the Family’s October 20 youth conference how the Church now offers a false kind of “mercifulness”, what he called a “kind of expression of the Church’s love and concern for mankind, as if we could love our fellow man apart from speaking the truth and acting according to the truth.”

Pope St. John Paul II witnessed this and addressed it throughout his pontificate, “calling for a new evangelization,” which he said meant not only “going out to the world to bring the Gospel” but that the Church also needs, “to be evangelized internally again because the evils of secularism and relativism had entered into the Church herself.”

The new evangelization is not “some new program; it’s not some approach invented by us,” said Burke.  It is Jesus Christ himself, “who comes to us unfailingly.”

“We need to draw close to Him to His truth, to get to his love in the sacraments and to live the life of the Church with the greatest possible integrity,” he added.

Naming sin, and making reparation for it

The “terrible crisis” in the Catholic Church in the United States is “truly as bad as it gets,” said Burke.

The Cardinal is dismissive of leaders in the Church who propose solutions which call for creating ‘new committees’ and launching ‘new programs’ which overlook the heart of the problem.

“What we’re dealing with here is grave sin,” and it can only be addressed, “by naming the sin, by taking responsibility for it, and by making reparation for it.”

The Cardinal urged the young people to love the Church, and not to abandon her as she goes through difficult times.

“I simply want to encourage your love for the Church,” implored Burke of the young people seated before him. “Sadly, many people who are scandalized by the situation … take the option of abandoning the Church.”

“Those who came into the Catholic Church as adults because they saw that it was the Church that would remain faithful to the apostolic tradition,” continued Burke, now “have the impression the that Church herself is becoming one more Protestant denomination,” picking and choosing “among the truths of our faith and truths about the moral life.”

He said that despite the sins of certain Church leaders, the Church herself remains the holy, mystical Body of Christ:

Because of the grave sins of certain leaders of the Church, it’s very difficult for us. It’s a scandal for us, but the only answer to it is our Lord Jesus Christ:  His teachings, His sacraments, and His governance of our lives in the Church.

So I want to encourage you very much in that way, and also encourage you to be sensitive to those who are suffering a great deal for this scandal and try to help them to understand that, notwithstanding the great confusion and division which has entered into the life of the Church, the Church remains the holy, mystical Body of Christ.

I urge you to confide yourselves to the maternal care of the Mother of the Church, the Blessed Virgin Mary, the Mother of our Savior who He gave to us as our Mother as he was dying on the Cross.

He encouraged the young people to resist beguiling doctrines. One of the great confusions in the Church today is that she “appears to show its love for sinful man by justifying his sin, by not being clear about sin and thus emptying the redemptive work of Christ of its meaning,” said Cardinal Burke.

No absolution offered by beguiling doctrines, even in the areas of philosophy and theology, can make man truly happy: only the Cross and the glory of the Risen Christ can grant peace to his conscience and salvation to his life.

As she did with the wine stewards at Cana, “Our Blessed Mother will always instruct us in this,” continued Burke.  “She takes us always to our Lord, with the instruction, ‘do what he tells us.’”

And each day take up “the Cross of the oblation of ourselves in pure and selfless love,” he added.