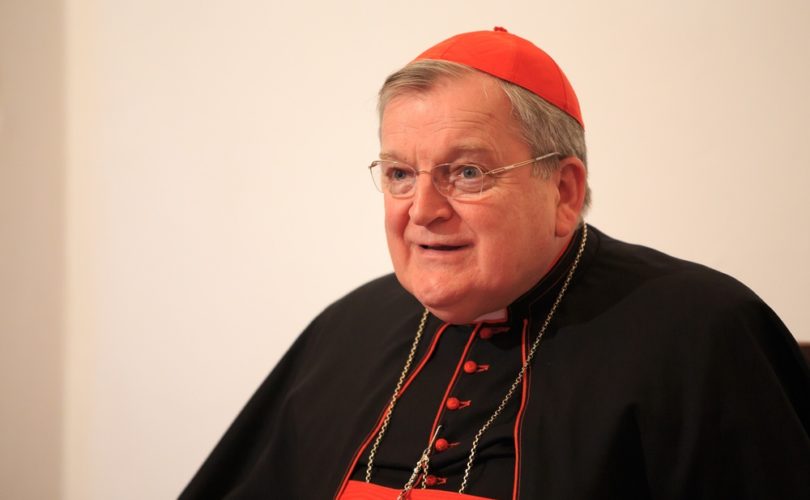 The Cardinal made the remark at this afternoon’s Question and Answer session at the Rome Life Forum in Rome. The session immediately followed Burke’s address on filial piety and national patriotism.

Burke had been asked, presumably apropos of Pope Francis’ refusal to grant an audience to Italy’s deputy prime minister Matteo Salvini, if a politician who resists large-scale Muslim immigration should be refused a papal blessing.

The Cardinal indicated that he wouldn’t comment on papal blessings, but that he thought the “fundamental question” was regarding the morality of resisting Islamic mass migration.

“I think the fundamental question here is: is someone who resists large-scale Muslim immigration committing an immoral act, and therefore should be, let’s say, denied Holy Communion or in some way recognized as a public sinner,” he said.

Burke responded by saying that the Church’s teaching on immigration, which he had discussed in his speech, supported individuals who are “not able to find a way of living in their own country.”

“And this is not true of immigrants who are opportunists, in particular in the case of Islam, which by its definition believes itself to be destined to rule the world, coming in large numbers to countries,” he said.

“You don’t have to be a rocket scientist to see what’s happened, for instance, in Europe, in countries like France and Germany and also here in Italy. And it’s also happening in the United States.”

Burke cited a book called No Go Zones which, he said,  “records places in the United States where, in fact, Muslim immigrants have set up their own legal order.”

“In other words, they resist the legitimate authority of the state,” he continued.

This suggests to the cardinal, then, that resisting mass immigration by Muslims into one’s country is a laudable act of patriotism.

“So to be opposed to large-scale Muslim immigration is …  a responsible exercise of one’s patriotism,” he said.

“Yes, [some] people are true refugees. We must receive them and help them in every way, but this is not the case when you have simply a large scale immigration.”

In his talk prior to the Q&A session, the Cardinal had quoted the 1992 Catholic Catechism regarding immigration, citing passages that said countries should prudently discriminate regarding migration and also outlined the duty of immigrants to respect the customs and laws of their host nations:

“The Catechism of the Catholic Church then takes up the obligations of 'more prosperous nations … , to the extent that they are able, to welcome the foreigner in search of the security and the means of livelihood which he cannot find in his country of origin,”'Burke said.  “Such welcome, as is clear from the text, is not indiscriminate, for it depends on the capacity of nations to accept such refugees from their homelands and on the impossibility of the refugees to find the means to live in their homelands.”

Burke noted that the Catechism also says immigrants must  “respect with gratitude the material and spiritual heritage of the country that receives them, to obey its laws and to assist in carrying civic burdens.”