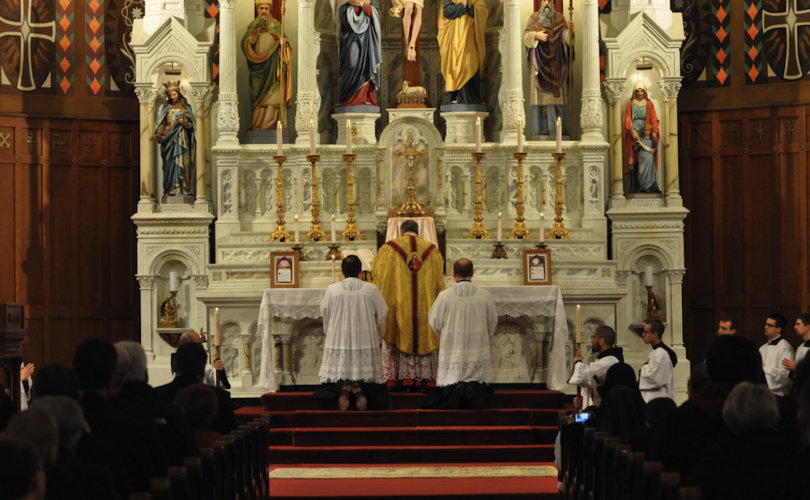 July 26, 2021 (LifeSiteNews) – Cardinal Raymond Burke, known for his favor toward the Latin Mass, has penned a statement on the Pope’s recent document restricting the traditional liturgy, noting his own “intense bond” with the old Mass, and offering a number of observations about the motu proprio itself, which he describes as a “severe and revolutionary action.”

The American cardinal, patron of the Sovereign Military Order of Malta, issued his statement on July 22, in light of Pope Francis’s motu proprio Traditionis Custodes, which inflicted severe restrictions on the traditional liturgy of the Church (Latin Mass).

Cardinal Burke expressed how he joined many Catholics “in their sentiments of profound sorrow” at the “severity of the discipline” found in Traditionis Custodes, declaring that he himself has an “intense bond” with the Latin Mass, or Usus Antiquior (UA).

Making a number of observations on the content of the document, Burke questioned first of all why the text had not been promulgated in Latin, as is proper with such documents. Already, he noted that discrepancies have crept into the English translation of the text as a result of not having an official Latin text.

One such example is when the Pope described the Novus Ordo as being the “unique expression of the lex orandi of the Roman Rite.” Cardinal Burke explained that while the English translation uses the word “unique,” the more correct translation should be “only,” a phrase that appears to lend even more weight to the Papal attack on the ancient liturgy.

Referencing the “severity of the document,” Burke stated that the apparent “grave evil” seen by the Pope in the Latin Mass meant that the Pope’s new restrictions signal the “ultimate elimination” of the traditional liturgy.

Such legislation, wrote the cardinal, is seemingly “directed to the correction of an aberration principally attributable to the ‘the desire and wishes’ of certain priests” promoting the Latin Mass. However, Cardinal Burke recalled the fact that “it was not the priests” but rather the faithful who clamored for the ancient liturgy.

A ‘severe and revolutionary action’ by the Pope

“From whence comes the severe and revolutionary action of the Holy Father?” questioned Burke. He noted the Pope’s own public reasons for restricting the traditional liturgy: namely the 2020 bishops’ survey on the Latin Mass, conducted by the Congregation for the Doctrine of the Faith (CDF), and the “opinion” of that same Congregation. It was supposedly the results of this questionnaire, which have yet to be publicly revealed, that prompted Francis to write about the “situation that preoccupies and saddens me.”

However, Cardinal Burke questioned the weight given to the survey, demanding that since it played such a significant part in formulating Traditionis Custodes, the results should be made public. “It would seem essential that the results of the consultation be made public, along with the indication of its scientific character.” The 73-year-old prelate also queried whether the advertised “opinion” of the CDF did in fact reflect “the consultation of those with the greatest knowledge of the faithful devoted to the UA?”

Liturgy is not part of ‘Church politics’

As former Prefect of the Supreme Tribunal of the Apostolic Signatura, the cardinal is one of the world’s foremost authorities on Roman Catholic canon law. He noted that contrary to the Pope’s depiction of devotees of the ancient liturgy fostering a rejection of the Church, they are fervent in their devotion to the Pope and the hierarchy.

“In all honesty, I must say that these faithful, in no way, reject ‘the Church and her institutions in the name of what is called the ‘true Church.’ Neither have I found them out of communion with the Church or divisive within the Church. On the contrary, they love the Roman Pontiff, their Bishops and priests, and, when others have made the choice of schism, they have wanted always to remain in full communion with the Church, faithful to the Roman Pontiff, often at the cost of great suffering. They, in no way, ascribe to a schismatic or sedevacantist ideology.”

He conceded that while there are “individuals and even certain groups” that “espouse radical positions” just as there are in “other sectors of Church life,” they do not represent the large body of faithful who are devoted to the traditional liturgy. “The Sacred Liturgy is not a matter of so-called ‘Church politics’ but the fullest and most perfect encounter with Christ for us in this world,” wrote the cardinal.

An argument of note that had been made by the Roman Pontiff was that the permissions for the Latin Mass granted by recent popes were simply to “foster the healing of the schism with the movement of Mons. Lefebvre,” the founder of the Society of Saint Pius X. However, Cardinal Burke declared that such was not the case, and referenced the words of Pope Benedict XVI, as contained in his book Last Testament in his own words. “The reauthorization of the Tridentine Mass is often interpreted primarily as a concession to the Society of Saint Pius X,” posited Benedict before rebuffing the claim: “This is just absolutely false! It was important for me that the Church is one with herself inwardly, with her own past; that what was previously holy to her is not somehow wrong now.”

In fact, Burke noted the many positive aspects that have sprung from the Latin Mass, citing “many” conversions, the enriching of “priestly spirituality” for “numerous” clerics, the nourishment provided to the saints for “centuries” as a result of the traditional liturgy. He even revealed that it was the ancient rites of the Catholic Church that were “a major inspiration of my priestly vocation.”

As highlighted by Pope Emeritus Benedict XVI in 2007, Burke recalled how the Latin Mass was “never juridically abrogated.” Nor is it permitted for a Pope to pretend to wield “absolute power” and thus to “eradicate a liturgical discipline.”

Rather, the power enjoyed by the Roman Pontiff is only that which is “necessary to defend and promote the doctrine and discipline of the Church,” and hence cannot be misused to attack that same faith.

As “every valid celebration of a sacrament, by the very fact that it is a sacrament, is also, beyond any ecclesiastical legislation, an act of worship and, therefore, also a profession of faith,” Burke said, noting that the traditional liturgy is not something which can be excluded from the “valid expression of the lex orandi.”

“It is a question of an objective reality of divine grace which cannot be changed by a mere act of the will of even the highest ecclesiastical authority.”

The cardinal also answered the point made by Pope Francis, who compared his restrictions on the Latin Mass to Pope St. Pius V’s own liturgical reforms. Burke noted how Pius V “essentially put in order the form of the Roman Rite as it had existed already for centuries,” whereas the liturgical alterations following Vatican II, resulting in the Novus Ordo, “constituted a radical change in the form of the Roman Rite.”

The Pope reassigned the traditional communities, such as the Fraternity of St. Peter (FSSP), Institute of Christ the King Soverign Priest (CKSP), and the Institute of the Good Shepherd (IBP), to the Congregation for Divine Worship (CDW) and the Congregation for Institutes of Consecrated Life and Societies for Apostolic Life (CICLSAL). The CDW is led by the recently appointed Archbishop Arthur Roche, who is known as a firm opponent of the Latin Mass. Meanwhile, the CICLSAL has been recently described by theologian and liturgy expert Dr. Peter Kwasniewski as “notoriously anti-traditional,” and is led by Cardinal João Bráz de Aviz.

Cardinal Burke issued a clear and succinct response to this move, noting that while CICLSAL is able to deal with queries on matters of canon law for such societies, “it is not competent to alter their charism and constitutions, in order to hasten the seemingly desired elimination of the UA in the Church.”

In closing, Cardinal Burke encouraged the faithful not to be disheartened, even though the Pope’s new motu proprio “naturally generates a profound distress and even sense of confusion and abandonment.”

He urged Catholics to avail of Canon 212 §3, which stipulates how Catholics have the right and duty to inform the clergy of their opinions on matters that pertain to the good of the Church and the preservation of morality. “[A]ccording to the knowledge, competence, and prestige which they possess, they have the right and even at times the duty to manifest to the sacred pastors their opinion on matters which pertain to the good of the Church and to make their opinion known to the rest of the Christian faithful, without prejudice to the integrity of faith and morals, with reverence toward their pastors, and attentive to common advantage and the dignity of persons.”