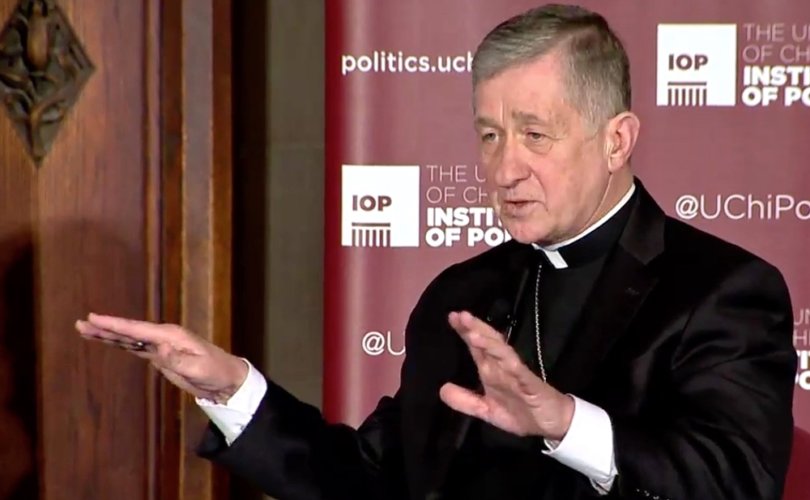 Cardinal Cupich expressed his position in the wake of Bishop Thomas Paprocki of Springfield, Illinois barring pro-abortion legislators from receiving the sacrament of Holy Communion. Citing canon 915 of the Code of Canon Law, Bishop Paprocki ruled last week that state legislators working to pass Illinois’s new abortion bill may not present themselves for communion in his diocese and that priests are expressly forbidden from giving the Eucharist to both the Senate president and the speaker of the House.

On June 12, Illinois governor J.B. Pritzker, a non-Christian, signed the Illinois Reproductive Health Act (Senate Bill 25) into law, which recognizes abortion as a “fundamental right” while mandating that insurance companies cover abortions. Catholics serving in the Illinois legislature voted in favor of the measure.

While Cupich is opposed to abortion, he told CNA, “I think it would be counterproductive to impose sanctions, simply because they don’t change anybody’s minds, but it also takes away from the fact that an elected official has to deal with the judgment seat of God, not just the judgment seat of a bishop. I think that’s much more powerful.”

He went on to say, “I have always approached the issue saying that the bishop’s primary responsibility is to teach, and I will continue to do that.”

Bishop Paprocki told LifeSiteNews in a recent interview that he barred the pro-abortion Catholic politicians from receiving Communion because he was concerned about the “salvation of souls.”

“As a shepherd of the Church, I’m concerned for the salvation of their souls,” Paprocki said of the lawmakers, “as well as the salvation of souls who are watching their actions and are scandalized by this.”

“And if we as bishops don’t say anything about it,” he continued, “that just adds to the scandal of people thinking that, “Well, these politicians are doing things that are very immoral and very sinful, and the bishops aren’t saying anything about that. So you know that would make it make it even worse. I just felt an obligation or responsibility to respond to what was going on.”

Both Cupich and Paprocki indicated that they had tried to communicate or had communicated with Senate President John Cullerton and the Speaker of the House Michael Madigan about their problematic positions. “I have conversations with them, and those continue to take place. They have to,” Cupich said, while Paprocki said he spoke to Madigan and wrote to him and Cullerton in advance of the decree.