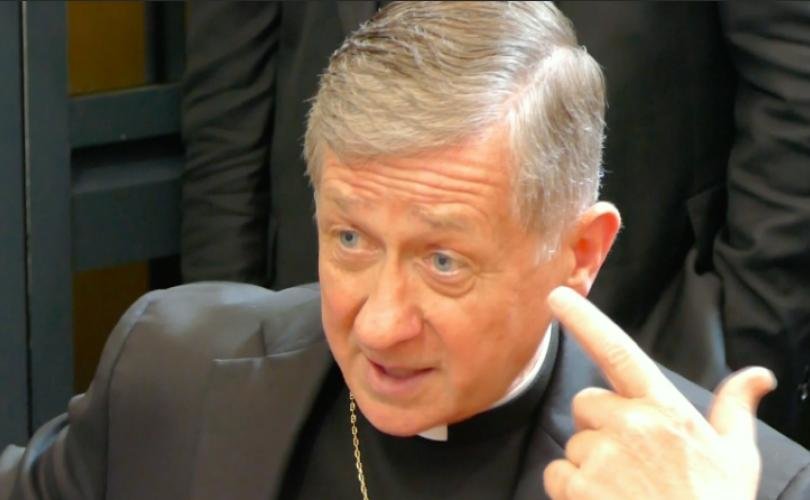 CHICAGO (LifeSiteNews) — Chicago Cardinal Blase Cupich released a new archdiocesan policy, ordering “all employees and clergy” to receive the COVID-19 injections no more than “five weeks” after full approval of “at least one of the three vaccines,” threatening “disciplinary measures” if priests and employees do not comply.

In a memo dated August 18, Cardinal Cupich outlined that the “goal of this policy is that all employees and clergy will be fully vaccinated against COVID-19 using one of the U.S. Food and Drug Administration (FDA) authorized vaccines and vaccination regimen.”

The directive, not “currently” applicable for volunteers, is due to take force just “five weeks” after the FDA gives approval to “at least one of the three vaccines,” which Cupich wrote would give time for the “unvaccinated persons to get their full regimen” of the injections.

‘Non-compliance’ with injection mandate could lead to ‘disciplinary action’

Cupich’s directive stipulates that in addition to receiving the gene-therapy injections, the employees and clergy must provide “documentation” to the archdiocesan “tracking portal or website” in order to prove their vaccination status. This “tracking” is to be done “centrally” so that the archdiocese will have full oversight into the vaccine status of all clergy and employees.

Despite the abortion-tainted nature of the injections – which has led Cardinal Raymond Burke to declare it is “never morally justified to develop a vaccine through the use of the cell lines of aborted fetuses,” – Cardinal Cupich did not permit any religious exemptions.

“Consistent with the current guidance of the Church, there will be no allowable religious exemption from compliance with the vaccination policy,” wrote the cardinal. However, in doing so, Cupich ignored a line from the December 2020 note from the Congregation for the Doctrine of the Faith (CDF).

While the CDF’s document did offer some support for using abortion-tainted vaccines – a matter strongly protested by a number of prominent, faithful clergy – the CDF also stated that “practical reason makes evident that vaccination is not, as a rule, a moral obligation and that, therefore, it must be voluntary.”

Instead, Cupich allows exemptions from the mandate only on medical grounds.

Should such a medical exemption be sought, a request is to be assessed by “a panel including two Medical Doctors; a pastor, a member of the General Counsel’s office and an AoC HR representative.” The decision of this body is not subject to an appeal, wrote Cupich.

Should such an exemption be granted, the cleric or employee would be forced to undergo weekly tests for COVID-19 and submit the results to the archdiocesan tracking portal, although the note mentions that the frequency of the tests. In addition, those who are not vaccinated will have to wear a face mask “at all times in Archdiocese facilities until further notice for the health and safety of employees/clergy and guests.”

Such restrictions are in addition to the cardinal’s stipulation that the “unvaccinated … may be restricted from use of certain amenities such as eating in lunchrooms if appropriate social distancing and/or other mitigation measures cannot be implemented to maintain a safe environment (e.g. staggered times, more than six-foot distancing etc.) in Archdiocese facilities until further notice for the health and safety of employees and guests.”

Furthermore, those who are able to obtain a medical exemption from the cardinal’s vaccine mandate might still face additional restrictions, as yet unspecified: “The Archdiocese reserves the right to prohibit unvaccinated employees/clergy from entering archdiocesan facilities for reasons of health and safety of employees and guests.”

The policy ends with a veiled threat from the cardinal’s office as he warns against “Non-compliance with the provisions of this policy,” which “may result in disciplinary action for those individuals.” No further detail is given about what “disciplinary action” might be expected.

LifeSiteNews repeatedly contacted the cardinal’s secretary, the diocesan press office, and the vaccine policy office but was unable to make successful contact with anyone authorized to respond to LifeSite’s questions about the policy.

The cardinal, known for his widespread deviation from Church teaching on a variety of issues, has also ordered his priests not to issue any religious exemptions from the abortion-tainted injections. In a letter sent out August 17, Cupich told priests to “politely decline” signing any such religious exemption templates, declaring “there is no basis in Catholic moral teaching for rejecting vaccine mandates on religious grounds.”

Writing that the Holy See “clearly stated that receiving the Covid vaccine is unquestionably in keeping with Catholic faith,” and that Catholic morality “always keeps in focus the common good,” Cupich declared that priests must thus refuse to support requests for a religious exemption.

He told clergy to explain that signing such a form “would mean that you would be endorsing something that is not in keeping with Catholic teaching.”

While the 72-year-old cardinal admitted that the laity “can determine their own actions” and refuse the injection, he told priests to “clarify” that lay Catholic “cannot use the teaching of the church to justify such decisions, which in their essence, are a rejection of the church’s authentic moral teaching regarding  Covid vaccines.”

Days earlier, reports emerged that Cupich’s opposition to any such religious exemption had resulted in him reportedly “leaning hard” on bishops and board members of the National Catholic Bioethics Center (NCBC) to retract their defense of religious exemptions from mandatory vaccination.

In a July 2 statement, the NCBC defended religious, medical, and conscience exemptions, and a few days later issued an exemption letter template that provided the basis for the Colorado letter some weeks later.

Speaking anonymously to CNA, one of the NCBC board members revealed that Cupich had been putting “a tremendous pressure” on the organization to retract its statements allowing for religious exemptions, but added that the NCBC would not change its statement.

With the issue of mandatory vaccination now looming in many areas of life, the Catholic episcopate in the United States appears divided over whether to grant religious exemptions from such mandates.

Catholic bishops in Colorado and South Dakota, along with the National Catholic Bioethics Center, have recently written to defend exemptions from vaccine mandates. All of these statements supported the right to religious, medical and freedom of conscience exemptions in the matter of vaccine mandates.

“If a Catholic comes to an informed judgment that he or she should not receive a vaccine, then the Catholic Church requires that the person follow this judgment of conscience and refuse the vaccine,” wrote the NCBC and Colorado’s Catholic prelates.

Meanwhile, along with Cupich, an increasing number of the U.S hierarchy refuses to permit religious exemptions to the abortion-tainted vaccines, including Archbishop José Gomez of Los Angeles, Cardinal Timothy Dolan of New York, Bishop Robert McElroy of San Diego, and Bishop Daniel Garcia of Monterey.

Their support for the injections, along with support for mandatory injections, comes in direct opposition to Cardinal Burke, former Prefect of the Supreme Tribunal of the Apostolic Signatura, who previously spoke out against vaccines using aborted babies: “It must be clear that it is never morally justified to develop a vaccine through the use of the cell lines of aborted fetuses. The thought of the introduction of such a vaccine into one’s body is rightly abhorrent.”