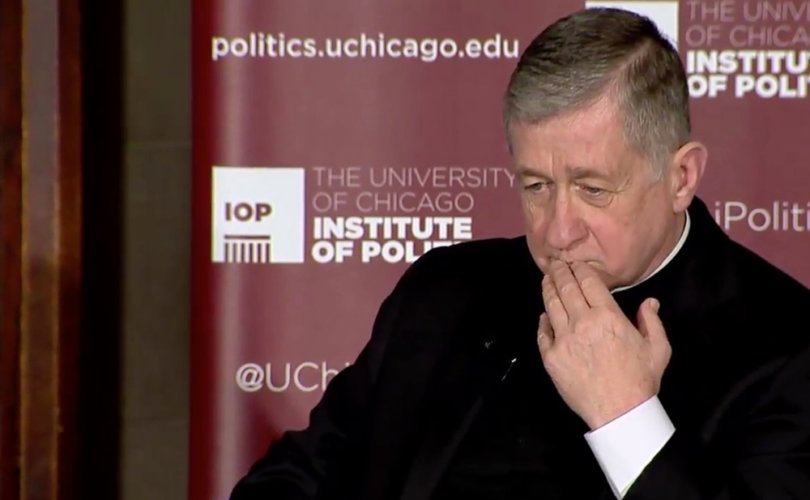 April 23, 2021 (LifeSiteNews) — After Denver Archbishop Samuel Aquila wrote a hard-hitting article last week explaining why pro-abortion politicians who say they are Catholic — without mentioning President Joe Biden by name — cannot receive Holy Communion, Cardinal Blase Cupich of Chicago wrote to him to express “a number of concerns,” urging the archbishop to issue a “public clarification.”

In an April 14 piece published in America Magazine, titled “For the church to live in eucharistic coherence, we must be willing to challenge Catholics persisting in grave sin,” Archbishop Aquila argues that love demands that shepherds speak the truth of the faith when it comes to them receiving the Body of Jesus.

“The truth may be hard to speak and hard to hear, but love speaks the truth. To approach the Eucharist casually and without the fear of possible condemnation is to risk one’s eternal salvation,” he wrote.

The Archbishop goes on to quote canon law (can. 915), according to which those who are “obstinately persevering in manifest grave sin are not to be admitted to Holy Communion.” He makes the case that individual conscience cannot override God’s law and the laws of the Church.

Aquila called it an error for Catholics to hold that “any baptized Catholic can receive Communion if he or she simply desires to do so.”

“None of us have the freedom to approach the altar of the Lord without a proper examination of conscience and proper repentance if grave sin has been committed. The Eucharist is a gift, not an entitlement, and the sanctity of that gift is only diminished by unworthy reception,” he wrote.

“Because of the public scandal caused, this is especially true in the case of public officials who persistently govern in violation of the natural law, particularly the pre-eminent issues of abortion and euthanasia, the taking of innocent life, as well as other actions that fail to uphold the church’s teaching regarding the dignity of life,” he added.

It was especially Aquila’s line that the “sanctity of that gift is only diminished by unworthy reception” that disturbed Cupich, prompting him to write the archbishop the very same day the article appeared to voice his concerns.

“I respectfully note that to claim that we can do anything to diminish the Eucharist, or its effects, is contrary to the church’s longstanding teaching,” Cupich wrote, reported The Pillar about the letter. The Pillar reported that it had viewed the letter sent from Cupich to Aquila.

“Catholic sacramental theology is based on the premise that the sacraments are the work of Christ, which is the meaning of the Church’s affirmation at Trent (DS 1608) that the sacraments act ex opere operato, or, as St. Thomas wrote in the Summa, III, 68,8: ‘The sacrament is not wrought by the righteousness of either the celebrant or the recipient, but by the power of God.’ Owing to the nature of God, Christ and his works can never be diminished by any act on our part,” wrote Cupich in his letter to Aquila.

“I write as a brother bishop with the suggestion that you consider offering a public clarification of your point,” he added.

Cupich, who was made a cardinal by Pope Francis in 2016 and is considered to be one of the most outspoken champions of the Pope’s agenda for the Catholic Church, has previously defended giving Holy Communion to pro-abortion politicians and has made it clear that he sees no problem for same-sex couples and the divorced and remarried to receive Holy Communion in accordance with their consciences. In January, Cupich rebuked the U.S. Conference of Catholic Bishops (USCCB) for issuing what he called an “ill-considered” statement on the day of President Biden’s inauguration. The USCCB warned in its Jan. 20 statement about Biden’s pledge to pursue anti-life and anti-family policies that would advance “moral evils” in the areas of “abortion, contraception, marriage, and gender.”

It appears that Aquila accepted Cupich’s suggestion of offering a “public clarification,” writing in Catholic World Report on April 18 that “one bishop expressed a concern” about his words and had asked for a clarification.

“Because of the confusion I may have caused, I promised the bishop that I would make a public clarification,” Aquila wrote, without naming Cupich.

Aquila goes on to offer what he calls an “amplification of the point” he had previously made about grace being “diminished by unworthy reception.” The Archbishop writes that he holds, “as does the Church, that grace is available ex opere operato, that is, the valid enactment of the sacraments makes available the grace of the sacraments.”

He goes on to quote St. Thomas, St. Augustine, St. Paul, the Catechism of the Catholic Church, and the Second Vatican Council as evidence that the Church does, in fact, teach that “unworthy reception of the Eucharist diminishes the effect of the sacrament.”

Aquila concludes his argument with a note of warning that those who receive Holy Communion in a state of mortal sin participate in a lie since they are neither in communion with Christ nor his Church.

The Archbishop ends his piece with a note about why he is obligated to speak out on this matter.

“I take seriously my obligation, lest I be condemned, to proclaim clearly, fully and coherently what the Church believes and teaches, for only then am I feeding the faithful under my care the fullness of the Gospel of Jesus Christ,” he writes.

Aquila’s two pieces come at a time when U.S. bishops grapple with what is to be done about the fact that the president of the United States calls himself Catholic, attends Mass regularly, and receives Holy Communion, all while championing positions on life, marriage, and the family that are explicitly contrary to Catholic moral teaching.

Several high-ranking Catholic shepherds, such as Cardinal Raymond Burke,  Archbishop Joseph Naumann, and Archbishop Salvatore Cordileone, have suggested that pro-abortion politicians such as Biden must be denied Communion to safe-guard the sacrament, to avoid scandal, and to call the sinner to repentance.

A doctrinal committee of the U.S. bishops is now examining a letter on “eucharistic coherence” to the faithful that was drafted by a now-dissolved special working group of the USCCB that was formed last November to deal with how to navigate the relationship between the bishops and Biden. It’s expected that the bishops will decide at an upcoming virtual meeting in June if the letter will be released.