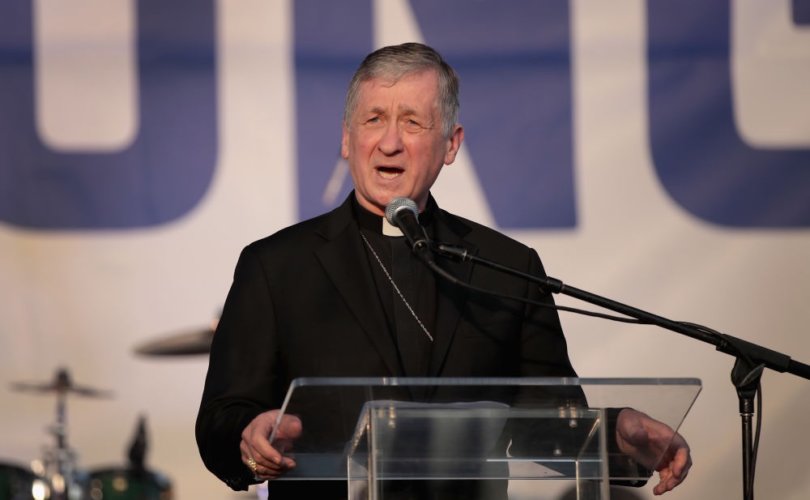 CHICAGO (LifeSiteNews) — The Archdiocese of Chicago’s Cardinal Blasé Cupich, known for his defense of giving Holy Communion to pro-abortion politicians as well as his crackdown on the Traditional Latin Mass, reportedly distanced himself from a Catholic group trying to stop the distribution of sexually-explicit LGBTQ+ content in public libraries.

A spokesman for Cupich told Chicago Sun-Times columnist Neil Steinberg that the Archdiocese of Chicago does not recognize Catholic advocacy organization CatholicVote as a “Catholic organization.”

CatholicVote is currently running a “Hide the Pride” campaign to encourage concerned parents to shield kids from pornographic LGBTQ+ content in the area’s public libraries.

We’re over half way through #PrideMonth and #HidethePride is continuing to succeed.

Read about parent’s experiences and join the cause here 👇https://t.co/c17VzEM8vt

RELATED: The Archdiocese of Chicago under Cdl. Cupich is in complete disarray, and there is no end in sight

“CatholicVote is not a Catholic organization,” said Paula Waters, chief communications officer for Cardinal Cupich. “It’s not a part of the church, or sanctioned by the church or has any relationship to the church. It has no standing.”

Instead, Waters described CatholicVote as “a PAC that appears to be well-funded.”

It’s unclear whether Cupich agrees with the intent of CatholicVote’s campaign, even though his office refuses to recognize the advocacy organization as “Catholic.”

While CatholicVote states on its website that it does “not claim to speak for any individual bishop or the United States Conference of Catholic Bishops,” the group says it represents “the voices of millions of Catholics across America who seek to renew our country and our culture, in full communion with and 100% faithful to the Magisterium of the Catholic Church.”

The organization has explained that its “Hide the Pride” campaign seeks to “empty local taxpayer-funded libraries of progressive sex- and gender-related content aimed at children.”

Concerned parents are encouraged to “go to the library, find the ‘Pride Month’ display full of LGBTQ books targeted at kids, and simply check out all those books at the front desk.”

Participants are then asked to send a letter to the library affirming their belief that “minor children have the right to belong to a community that respects their innocence and allows families to have conversations about sex and sexual attraction privately, and only when parents deem it appropriate.”

“Hide the Pride” targets books, including “Gender Queer,” which graphically depicts teenagers engaging in homosexual acts with one another, Chicago City Wire noted.

The advocacy organization has stated that its “Hide the Pride” movement is an answer to the “recent cries of concerned parents throughout the country” who “do not want their children exposed to sexual and ‘trans’ content as part of their education.”

However, the writer of the Chicago-Sun Times column (who recently drew backlash for a separate piece in which he argued that “guns are more dangerous than child pornography”) attacked CatholicVote and its president, Brian Burch, for allegedly attempting to “tightly control what …  children learn about life” by removing pornographic and inappropriate content from the shelves.

“Unsatisfied with merely raising their own children, [Catholic Vote has] appointed themselves as the moral guardians of everybody else’s children, too, no matter which faith or philosophy those parents imagine themselves free to practice,” Steinberg said.

Burch responded to Steinberg’s article and Cupich’s apparent disapproval of CatholicVote by saying his organization was “stunned to see our name slandered by an Archdiocesan official at the behest of a left-wing journalist who recently made waves for implying his support for legalizing child pornography,” the Chicago City Wire reported.

“We have a strong working relationship with many bishops and Catholic conferences around the country,” Burch said, explaining that CatholicVote “is made up of baptized Catholics, working in full communion with the Church to help defend and promote Catholic social teaching.”

“We have always been careful never to advocate for anything that is contrary to Catholic social teaching,” he said.

News of Cupich’s apparent disavowal of CatholicVote comes amid a growing movement of parents who have expressed vehement opposition to sexually explicit and homosexuality-promoting content targeted at children.

Earlier this year, a Virginia school board decided to remove a sexually explicit book after parents’ complaints. Several months later, an Idaho high school also removed pornographic books from its library shelves after outrage from parents.

In March, Florida Republican Gov. Ron DeSantis signed a bill affirming parents’ rights to have a voice in which books are stocked in school libraries.