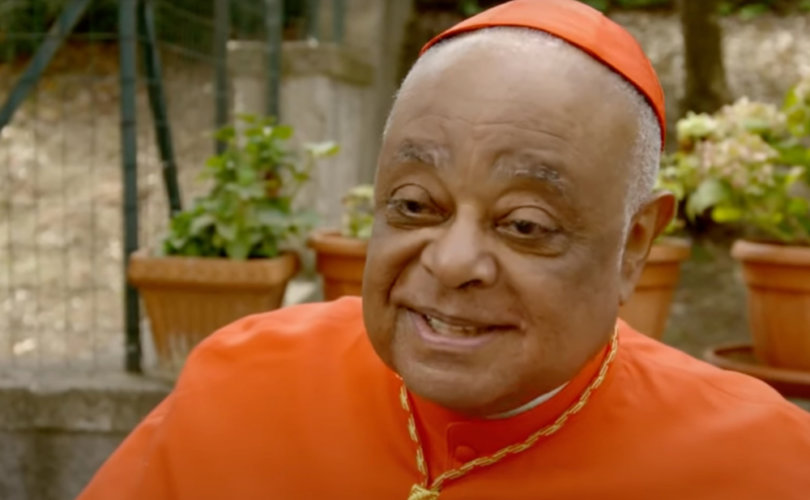 VATICAN CITY (LifeSiteNews) – Washington’s Cardinal Wilton Gregory has once again supported giving Holy Communion to pro-abortion politicians, saying that bishops are “not there as police,” and praising the Pope’s recent restrictions on the Latin Mass.

Gregory spoke to assembled members of the press on September 27, while in Rome to take possession of his titular church, Santa Maria Immacolata in Grottarossa.

The cardinal characterized as “extraordinarily helpful” Pope Francis’ recent comments on abortion. The Pope had called it “murder,” but added that bishops should not “go condemning” pro-abortion politicians.

“I think it was extraordinarily helpful, and it reminded the bishops, all of us, that we’re not there as police, we’re there as pastors, and as pastors, we certainly have to teach the faith of the Church, we have to be true to the Church’s heritage of faith, but we also have to bring people along with us,” he declared.

While a bishop’s role is “not simply a matter of pointing out their errors,” Cardinal Gregory said bishops should be “welcoming” and engage in “drawing [pro-abortion politicians] closer to the life of the Church, and we need to do that more effectively, more publicly.”

Gregory, raised to the college of cardinals last November, noted that he was “very grateful” for the Pope’s comments, that he “felt supported” by them, and that they should be a sign for other bishops that the Pope is supporting their “pastoral service.”

The cardinal, who has a long list of anti-family, anti-life, and anti-Catholic abuses to his name, made his latest comments in line with those he made a year ago, when he defended giving Holy Communion to pro-abortion Joe Biden. Gregory noted how Biden had received Communion during his eight years as vice president under President Barack Obama, and that “I’m not going to veer from that.”

The Catholic Church teaches that abortion is always wrong because it kills an innocent human being, thus violating the Church’s prohibition on murder, a teaching which “remains unchangeable.”

Furthermore, the Church’s canon law stipulates that under no circumstances are those who persist in manifest grave sin to receive the Holy Eucharist. “Those who have been excommunicated or interdicted after the imposition or declaration of the penalty and others obstinately persevering in manifest grave sin are not to be admitted to holy communion.”

The D.C. cardinal also touched on Pope Francis’ recent restrictions on the traditional liturgy of the Church, described by some as “unjust” and an attempt to “create conditions to make the TLM wither and die.”

Gregory said Francis “acted wisely” and “pastorally.” Equating the Pope with the “image of being a good shepherd” who “wants to keep the whole flock together,” Gregory suggested that unity was “the heart and soul” of the Pope’s intention “and hopefully it will be the end result of that decision.”

His comments were not restricted to liturgical matters, as Cardinal Gregory also dealt with the matter of the COVID-19 injections, which are marked by their link to abortion. Avoiding a question on whether he supported vaccine mandates, the cardinal called it “foolish” to not take the injections, since they were a “source of protection” for people.

He also attacked the possibility of a religious objection to the abortion-tainted shots, saying, “It’s hard to imagine someone objecting on religious grounds, because the Holy Father, Pope Benedict, both of them have had it, I’ve had it, and a good number of Church leaders, not just Catholic church leaders, but Church leaders throughout the world, have taken the vaccine as a sign to their people that this is an action that is helpful for their lives and for the lives of their loved ones.”