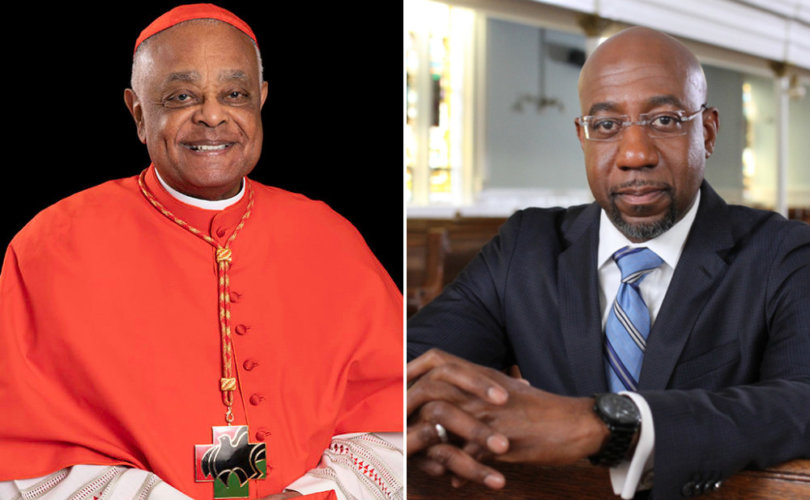 WASHINGTON, D.C., January 11, 2021 (LifeSiteNews) — The archbishop of Washington, D.C., Wilton Cardinal Gregory, and recently elected pro-abortion Senator Rev. Raphael Warnock (D-GA), have a long relationship of collaboration and shared ideology. Both are keen advocates for combating climate change, achieving social justice, and Black Lives Matter, and Cardinal Gregory has already signaled he is open to compromise on the issue of abortion.

History of collaboration in Georgia

Back in 2010, The Georgia Bulletin, which is the Catholic paper of the Archdiocese of Atlanta, noted Warnock was a speaker at a weekend conference calling for an end to the death penalty. “The death penalty is the third rail of American politics. Faith communities will have to lead the way,” he said.

Gregory served as Archbishop of Atlanta between 2004 and 2019, when Pope Francis moved him to the nation’s capital, and has himself often spoken out against the death penalty. In a 2019 op-ed in America Magazine, Gregory argued strongly against the death penalty, calling on the government to “turn back from the path of death and forgo all executions.”

The Georgia Bulletin noted that there would be “four Catholic Charities staff members” working there, and that it would be CCA’s largest joint project to date.

In fact, Warnock was one of the honored guests, alongside Gregory, at the CCA’s 60th anniversary gala dinner in 2013, receiving the Archbishop John F. Donoghue Award. The award is given annually to “a person who demonstrates qualities of selfless service and devotion to helping others in need.”

Archbishop Gregory was in attendance as an honored guest, along with his two auxiliary bishops, Luis R. Zarama and David P. Talley. Warnock received the award due to serving as head of the Martin Luther King Sr. Community Resources Complex, and in his speech thanked the Church for its leadership in the community, adding that “Archbishop Gregory makes us all proud.”

The two religious leaders also share a common drive in the area of climate change, as Gregory has championed Pope Francis’s encyclical Laudato Si, drawing up a diocesan plan to implement the encyclical, promoting the themes of “recycling, conservation, family and faith,” and looking to “create a more sustainable world in harmony with God.”

Gregory received strong support from Warnock for the plan, and the National Catholic Reporter noted that Warnock’s Ebenezer Church was among various churches and dioceses which adopted Gregory’s environmental plan. Sr. Hortensia Del Villar, chair of the San Bernardino, California, diocesan Laudato Si Committee, which also adopted the plan, hoped that through using it, the Church would become known for its “care for the earth as it is for its care for the poor.”

Gregory himself welcomed the wide-spread, ecumenical adoption of the plan, mentioning Warnock by name, adding that Warnock saw how Laudato Si was “a letter written to all people of good will of every faith and those who might profess no particular religious faith.” Gregory hailed Warnock’s strong endorsement of the diocesan plan, calling Laudato Si “a letter written to every person on the planet that we share.”

Back in November, it was noted how Gregory had “distinguished” himself among his fellow bishops “with his embrace of Pope Francis’s landmark encyclical on the environment and climate change.” The same site also commented favorably on Warnock, calling him a “leader in a growing movement among American Black churches to embrace environmental activism.”

Warnock himself said that it was “past time” to correct “environmental wrongs and provide communities on the frontlines of our climate crisis a voice and a means to fight back against the pollution that threatens their children and families.”

Warnock has devoted himself to so-called “social justice issues,” saying that his priorities will be built on “moral imperatives central to Black theology,” claiming he will champion “the economically disenfranchised” and work “against the racial and gender inequalities interwoven into our politics.” His actions are mirrored by Gregory, who uses his homilies as a means of promoting racial justice, saying, “We are at a pivotal juncture in our country’s struggle for racial justice and national harmony.”

In light of the Black Lives Matter (BLM) riots, Warnock expressed his own support of the movement, and BLM subsequently supported both Warnock and fellow Democrat Senate candidate John Ossoff, by raising $500,000 for the Georgia campaign. When Warnock’s victory was declared, BLM tweeted, “Black voters and organizers did that.”

Gregory, too, has aligned himself with the BLM ideology, claiming “we tragically still see repeated incidents of police brutality against African Americans,” and that the “virus of racism” had spread throughout the country.

Warnock has previously called himself a “pro-choice pastor,” clearly asserting his alignment with the abortion lobby. In the wake of his message, over two dozen black pastors sent a letter to Warnock, calling him out for his pro-abortion position and asking him to reconsider his support.

Whilst Cardinal Gregory has not come out in favor of abortion, he has signaled a future compromise with Warnock, by stating that he would not refuse giving Holy Communion to heavily pro-abortion Joe Biden.

Speaking before he was made a cardinal, Gregory expressed a wish for a “conversational relationship” with the pro-abortion politician, saying: “I hope it’s a real dialogue, because I think that’s the mantra of Pope Francis — that we should be a church in dialogue, even with those with whom we have some serious disagreements.”

After being made a cardinal, Gregory reissued his words about Biden, saying he wants a “serious conversation, knowing full well that there are issues that he and I will be diametrically opposed to, but hopefully also being able to capitalize on issues that we can advance together.”

Gregory also said that he would like to see Biden’s “position on the environment, on equality, racial justice,” calling for “openness and dialogue” to “foster a spirit of collaboration and understanding.”