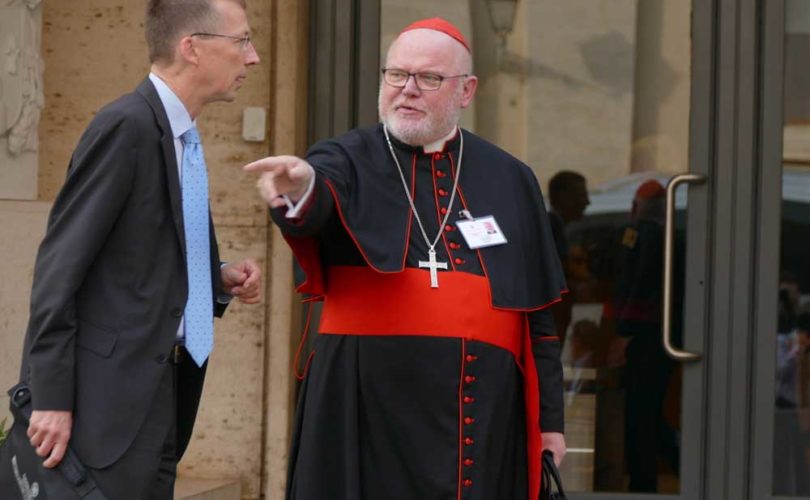 September 17, 2019 (LifeSiteNews) – Cardinal Reinhard Marx has fired back at the Vatican after it informed him the German bishops’ plans for a “binding synodal path” are “not ecclesiologically valid,” saying the German bishops’ plans, which include addressing issues of priestly celibacy, the role of women, and sexual morality, will be “helpful” to the Church.

“Countless believers in Germany consider [these issues] to be in need of discussion,” Marx wrote to Cardinal Marc Ouellet of the Vatican’s Congregation for Bishops.

More than 200,000 Catholics left the Church in Germany in 2018 and Mass attendance in that country continues to plummet. Germans are leaving Protestantism in droves, too.

“We hope that the results of forming an opinion [on these matters] in our country will also be helpful for the guidance of the Universal Church and for other episcopal conferences on a case-by-case basis. In any case, I cannot see why questions about which the Magisterium has made determinations should be withdrawn from any debate, as your writings suggest,” Marx wrote, as reported by Catholic News Agency.

Marx told Ouellet the German bishops’ synod will proceed, despite a document from the Pontifical Council for Legislative Texts detailing the canonical problems with their approach that accompanied Ouellet’s initial warning to him. Marx also said the synod is neither a council nor a synod – both of which are defined in some sense in canon law – but rather a unique “process”: “The Synodal Way is a sui generis process. The draft statutes should therefore by no means be read and interpreted through the lens of canonical instruments such as a plenary council. It is not a Particular Council!”

The German bishops have been at the forefront of pushing heterodoxy in the Church. They were one of the main forces arguing for admittance to Holy Communion of couples in adulterous relationships, what critics say amounts to sacrilege. They are financing many of the preparations for the Amazon Synod, during which some of the same topics from their country’s synod will be considered for the whole Church. The German bishops have also officially approved Communion for Protestants in some cases. Two German bishops recently came out in support of the Church blessing sodomitical relationships.

There are some faithful German prelates who have cautioned against the “binding synodal path” and/or the Amazon Synod’s working document, such as Cardinal Walter Brandmüller, one of the two remaining dubia signers; Cardinal Gerhard Müller, former Prefect for the Congregation of the Doctrine of the Faith; and Bishop Rudolf Voderholzer of Regensburg.