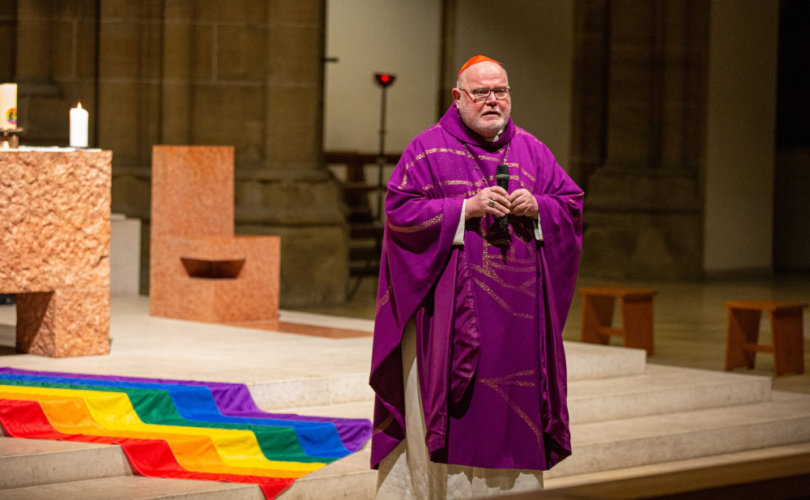 MUNICH (LifeSiteNews) – Cardinal Reinhard Marx of Munich and Freising, one of the highest-ranking German prelates, has claimed that homosexuality is not sinful, contradicting perennial Church teaching.

Marx made the comment during a Wednesday interview with German magazine Stern, arguing that homosexuality even when acted upon is not sinful.

“Homosexuality is not a sin,” Marx told the Stern magazine.

“It is in keeping with a Christian attitude when two people, regardless of their gender, support each other through joys and sorrows. I speak of the primacy of love, particularly in the sexual encounter,” he added.

On March 13, Marx celebrated Sunday Mass for the “Munich Queer Community” during which he said he wished “for an inclusive Church.”

“Ten or fifteen years ago, I could not have imagined myself celebrating a service like this one today,” Marx said.

In his interview with Stern, the cardinal said he was aware of contradicting official Church teaching on this issue, but insisted he wanted to “say what I think” and to “take the Church’s teaching” further.

Marx opined that that people who “threaten homosexuals with hell have understood nothing.”

Commenting on this, Marx said that “the catechism is not set in stone,” and that people are “allowed to question what’s in there.”

Back in January, Marx also expressed his support for ordaining homosexual men to the priesthood, arguing that homosexuality should not be a restriction on the “ability of becoming a priest.”

This goes against 2005 instruction from the Congregation for Catholic Education, which states that “if a candidate practices homosexuality or presents deep-seated homosexual tendencies, his spiritual director as well as his confessor have the duty to dissuade him in conscience from proceeding towards ordination,” and that it “would be gravely dishonest for a candidate to hide his own homosexuality in order to proceed, despite everything, towards ordination.”

In a March 2021 note, the Vatican reiterated the Church’s consistent doctrine on homosexuality by firmly banning same-sex blessings.

However, in Germany’s Synodal Way, an overwhelming majority of participants voted early February to approve documents calling for blessing of same-sex couples and the ordination of women.