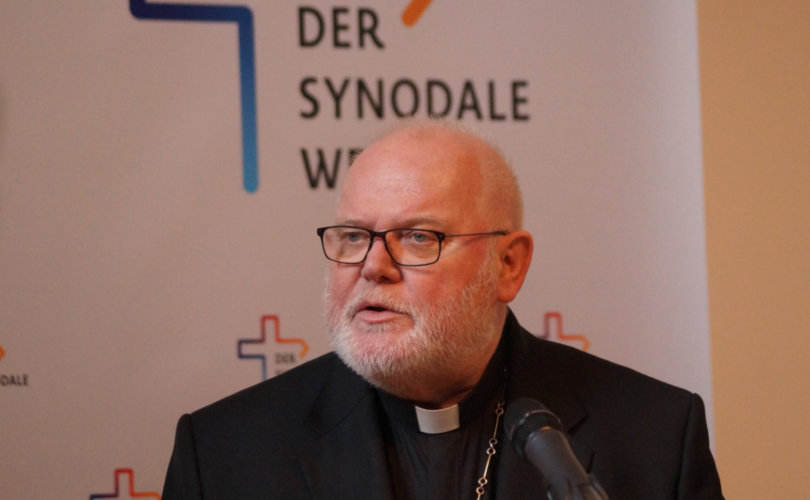 MUNICH (LifeSiteNews) — Cardinal Reinhard Marx, a dissident German prelate and close adviser of Pope Francis, called for the establishment of the women’s diaconate on Saturday.

“I believe that the time is ripe that it must and should be open to men and women,” said the Munich Archbishop during a sermon at the Cathedral of Our Lady, reported MK-Online, adding that Marx called for “a new approach.”

Marx said a lot of work remains to be done “theologically and practically,” according to the German Catholic outlet. He continued, “I am convinced that this renewal can be a great gift for the church.”

The announcement was made on the occasion of the 150th birthday of Ellen Ammann, who co-founded the Munich branch of the German Catholic Women’s Association. During his sermon, Marx called on Ammann to “accompany us on this path.”

The women’s diaconate itself has been declared impossible by former prefect of the Congregation for the Doctrine of the Faith Cardinal Gerhard Müller, but the participants in Germany’s Synodal Path, which include Marx, have exceeded this already-heterodox aspiration by calling for women priests as well.

In February, an overwhelming majority of Synodal Path clergy voted in favor of blessing same-sex couples, overhauling Church teaching on homosexuality, optional celibacy for priests, lay involvement in the election of new bishops, and the ordination of women to the priesthood. Many orthodox prelates have warned that the Synodal Path puts the German clergy at risk of schism.

The possibility of “women deacons” is not just being welcomed by the clergy in Germany. It is still being considered by the Vatican as an institution that can be established Church-wide.

After Pope Francis’ first commission to study the possibility of women deacons ended in deadlock, the Roman Pontiff created a second commission in April 2020 to revisit the issue. Prior to their first meeting in August 2021, the commission’s secretary, Father Dupont-Fauville, told The Tablet he was unable to comment on their work, since it was “covered by the pontifical secret.”

Meanwhile, the liturgical institution of female lectors and acolytes — both of which are minor orders — through Pope Francis’ January 2021 motu proprio “Spiritus Domini” (which changed Canon Law), could be considered an opening to a subsequent “female diaconate.” This is considered “possible” because, as liturgist Dr. Peter Kwasniewski noted, Pope Paul VI “attempted to abolish the minor orders and to replace them with what he called the ‘ministries’ of acolyte and lector.”

In his book “Ministers of Christ,” Kwasniewski argues that the minor orders must be reserved for men because they “They order the soul of the minor cleric gradually toward the eventual reception of the sacred priesthood itself,” and they “are a fanning-out of the holy diaconate instituted by Our Lord Jesus Christ.”

He further points out that the diaconate is prefigured by the role of the Levites in the Old Testament, and that Christ Himself exemplified the functions of the minor orders, as well as the diaconate.

“The function of subdeacon or deacon was exercised by Christ, for example, during the Last Supper when He girded Himself with a servant’s apron and washed the feet of the apostles who, during the same Supper, were constituted by Him true priests of the New Covenant,” wrote Kwasniewski.

“All liturgical services within the sanctuary of the church represent Christ, the supreme ‘deacon,’ and therefore, according to the perennis sensus of the Church and its uninterrupted tradition, both the higher and lower liturgical services are performed by male persons,” continues Kwasniewski.

Cardinal Gerhard Müller has affirmed that this teaching on the impossibility of women receiving the Sacrament of Holy Orders in each of the three degrees, including the diaconate, is a “dogma” of the Faith of the Catholic Church.

Some also consider the “female diaconate” a “Trojan horse” to introduce women priests. Dorothy Cummings McLean has pointed out that in the Anglican Church, once women were in the diaconate, the proponents of women’s ordination “naturally” wanted to progress to the next stage of orders, the “priesthood” or presbyterate — and that is just what unfolded.

Archbishop Julian Porteous of Hobart in Tasmania has noted that support for the “women’s diaconate” lacks “a promotion of both authentic religious life for women and more generally complementary nature of the feminine genius.”

Phyllis Zagano, an adjunct professor of religion at Hofstra University, has argued that women’s increasing and unprecedented roles in the Roman Curia under Pope Francis will not necessarily lead to the women’s diaconate, since such a “ministerial” position must be distinguished from the “managerial” positions to which Pope Francis is appointing women.