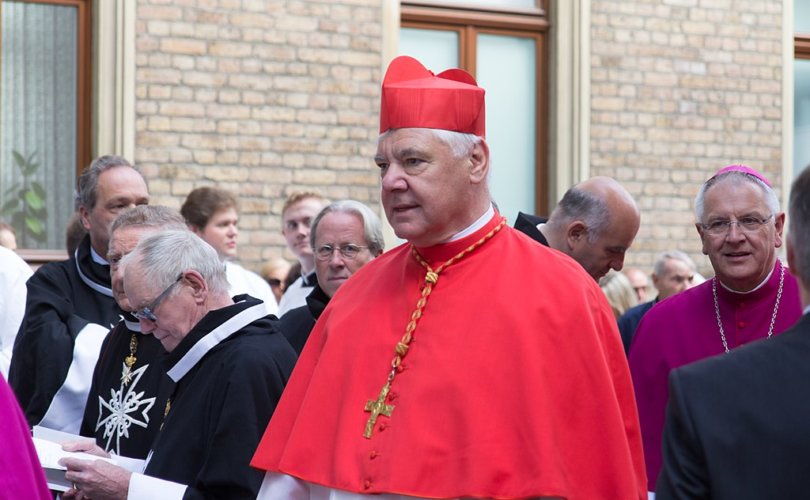 (LifeSiteNews) — Cardinal Gerhard Müller said in a recent interview that a pope loses his office if he becomes a heretic and “if the contradiction to the revelation and the dogmatic teaching of the Church is evident.”

Müller made the remarks about a pope possibly losing his office while answering a question about papal infallibility in an interview published on the German Catholic news site kath.net.

“Dogmatic declarations may have the quality of infallibility if their content derives from Sacred Scripture and the Apostolic Tradition of the Word of God, and if they are formally presented to be believed by the proper authority of the Magisterium of the Pope and the bishops, with the assistance of the Holy Spirit, as a truth revealed by God,” the German cardinal explained.

However, “a new public revelation they [the Pope and the bishops] do not accept as pertaining to the divine deposit of faith (Lumen Gentium 25),” Müller continued.

“It is therefore erroneous to think that a council or a pope could annul an earlier dogma or stipulate, for example, that the nature of the sacrament of Holy Orders does not include the requirement of the male sex of its recipient,” the German cardinal said, adding that it would also be wrong to think that the pope or a council could introduce marriage between two people of the same sex.

“In an extreme case, a pope could become a heretic as a private person and thus automatically lose his office if the contradiction to the revelation and the dogmatic teaching of the Church is evident,” Müller stated.

The position that a pope could become a heretic and lose his office was also held by St. Robert Bellarmine, a Doctor of the Church, who wrote about the issue in the second book of his work “De Romano Pontifice” (“On the Roman Pontiff”). According to Bellarmine, “the Pope who is manifestly a heretic ceases by himself to be Pope and head, in the same way as he ceases to be a Christian and a member of the body of the Church; and for this reason he can be judged and punished by the Church.” (“De Romano Pontifice,” Book II, Chapter 30)

“This is the opinion of all the ancient Fathers,” Bellarmine continued, “who teach that manifest heretics immediately lose all jurisdiction, and outstandingly that of St. Cyprian (lib. 4, epist. 2) who speaks as follows of Novatian, who was Pope [antipope] in the schism which occurred during the pontificate of St. Cornelius: ‘He would not be able to retain the episcopate, and, if he was made bishop before, he separated himself from the body of those who were, like him, bishops, and from the unity of the Church.’”

“According to what St. Cyprian affirms in this passage, even had Novatian been the true and legitimate Pope, he would have automatically fallen from the pontificate, if he separated himself from the Church,” Bellarmine stated, adding that “[t]he foundation of this argument is that the manifest heretic is not in any way a member of the Church, that is, neither spiritually nor corporally, which signifies that he is not such by internal union nor by external union.”

Furthermore, Müller noted in the same interview that “every pope must distinguish precisely between his task and himself as a private person,” and that a pope “must not impose his preferences on other Christians.”

“A pope or bishop or any other ecclesiastical superior must also not abuse the trust that is readily placed in him in a fraternal atmosphere in order to provide his incompetent or corrupt friends with ecclesiastical sinecures,” the German prelate continued.

Müller mentioned the betrayal of Judas and the denial of Jesus by St. Peter before the Passion as proof that “Church officials in history and the present can also fail and abuse their office selfishly or narrow-mindedly.”

The “best way” that the faithful “can support the Pope and the bishops is through prayer,” Müller stated, referencing Jesus Christ’s words directed at St. Peter: “And the Lord said: Simon, Simon, behold Satan hath desired to have you, that he may sift you as wheat. But I have prayed for thee, that thy faith fail not: and thou, being once converted, confirm thy brethren.” (Luke 22:31-32)

The German Cardinal and former head of the Congregation of the Doctrine of the Faith has been a staunch critic of recent heterodox developments in the Church, especially the German Synodal Way and Pope Francis’ Synod on Synodality, which he called a “hostile takeover of the Church.”