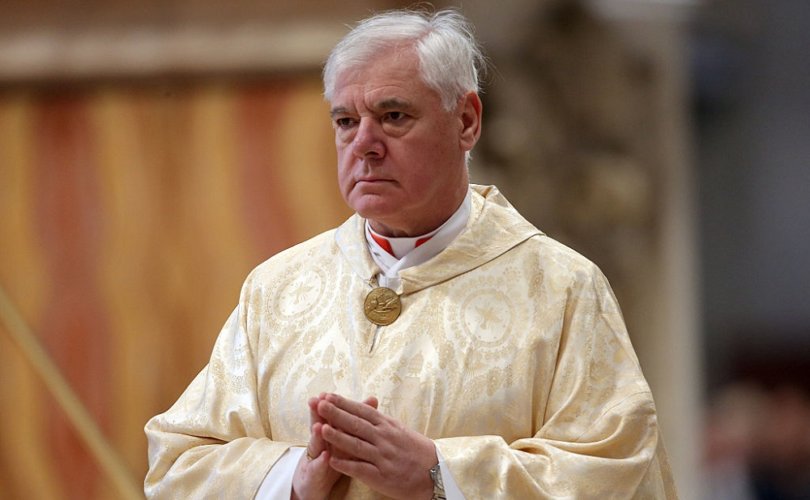 (LifeSiteNews) — Cardinal Gerhard Müller, the former head of the Congregation for the Doctrine of the Faith (CDF), kindly provided LifeSite with a copy of his reflections on the reform of the Curia as it is being implemented with the papal document Praedicate Evangelium, signed by Pope Francis on March 19. Müller had intended to present his statement (see full text below) to the Consistory of cardinals that met at the end of August in Rome, but due to the limited time allotted for speaking at the meeting, he was not able to deliver it.

In his statement, the German cardinal, who was dismissed by Pope Francis in a sudden fashion in June 2017, makes it clear that he sees a worrisome trend currently taking place in the Church. He opposes both a strong papalism that undermines the sacramental teaching authority of each individual bishop as well as the undermining of the ordained office and authority by delegating leading positions in the Roman Curia and in dioceses to lay people.

“It is not progress in ecclesiology,” he wrote, “but a blatant contradiction to its fundamental principles, if all jurisdiction in the Church is deduced from the jurisdictional primacy of the Pope. Also the great verbiage of ministry, synodality, and subsidiarity cannot conceal the regression to a theocratic conception of the papacy.”

The German prelate insisted that the Pope’s authority is based on the fact that Christ Himself has given him the authority, and no one else. “Peter acts in the authority of Christ as His Vicar. His authority to bind and loose is not a participation in the Omnipotence of God,” Müller insisted. He goes on to say that “the apostolic authority of the Pope and of the bishops is not of their own right but only a spiritual power conferred to serve the salvation of souls through the proclamation of the Gospel, the sacramental mediation of grace, and the pastoral direction of the pilgrim People of God to the goal of eternal life.”

That is to say, the Pope’s authority is bound and limited by his duty to lead souls to salvation the way Christ Himself has ordered it. He is not independent of Christ’s mandate.

Therefore, “a Church totally fixated on the Pope was and always is the caricature of the Catholic ‘teaching about the institution, the perpetuity, the meaning and reason for the sacred primacy of the Roman Pontiff,’” the cardinal explained.

Based on the principle concerning the limits of the authority of the Pope, Cardinal Müller makes it clear that the Pope cannot change the Church’s hierarchical and sacramental order by appointing lay people as heads of a diocese or of a curial office. “Nor can the Pope confer on any lay person extra-sacramentally – that is, in a formal, legal act – the power of jurisdiction in a diocese or in the Roman curia, so that the bishops or priests may act in his name,” the prelate wrote.

The publication of this intervention by Cardinal Müller is the second intervention by a cardinal that could not be delivered at the recent Consistory. German Cardinal Walter Brandmüller, a church historian, was not able to deliver his remarks either, and so Sandro Magister published them on his blog. In this intervention, Cardinal Brandmüller bemoaned the fact that under the pontificate of Pope Francis the free discussion of cardinals with the Pope have essentially ceased to exist. “In ancient times this function of the cardinals found symbolic and ceremonial expression in the rite of ‘aperitio oris,‘ of opening the mouth,” the cardinal wrote, which means “the duty of frankly expressing one’s own conviction, one’s advice, especially in consistory.” He then added that this necessary frankness “is being replaced by a strange silence.”

The German prelate therefore found that the consistories under Pope Francis are not very effective and helpful. “Forms were distributed to request speaking time, followed by obviously spontaneous remarks on any sort of topic, and that was it,” he described the past consistories. “There has never been a debate, an exchange of arguments on a specific topic. Obviously a completely useless procedure.”

The last known controversial Consistory where the cardinals of the Catholic Church were still able to speak freely was the 2014 Consistory, at which Pope Francis invited Cardinal Walter Kasper to present his Kasper proposal regarding the admittance of remarried divorcees to Holy Communion. As Italian vaticanista Marco Tosatti reported at the time, a large number of cardinals opposed Pope Francis’ initiative. Since then, Pope Francis never allowed such a free discussion to take place during a Consistory. These two German cardinals are to be commended for making sure that such a partial discussion can take place in public now.

Comments on the Reform of the Curia in ‘Praedicate evangelium’

It is not progress in ecclesiology, but a blatant contradiction to its fundamental principles, if all jurisdiction in the Church is deduced from the jurisdictional primacy of the Pope. Also the great verbiage of ministry, synodality, and subsidiarity cannot conceal the regression to a theocratic conception of the papacy.
These ideals should not only be passed on to others as desiderata but should be demonstrated daily in the exemplary treatment of one’s own collaborators, especially priests. It is necessary to be absolutely clear about the fundamental difference between the ecclesiastical authority of the pope as the successor of Christ and his political-worldly functions as sovereign of the Vatican State or of the Holy See as a subject of international law. Any ecclesiastical jurisdiction is apostolic-sacramental in nature and related to the salvation of souls as distinguished from the political-juridical nature of the exercise of power in a state, including the Vatican State.
Peter acts in the authority of Christ as His Vicar. His authority to bind and loose is not a participation in the Omnipotence of God. For he did not say to him, “To you is given all power is given to you in heaven and on earth” (cf. Mt 28:18). The apostolic authority of the Pope and of the bishops is not of their own right but only a spiritual power conferred to serve the salvation of souls through the proclamation of the Gospel, the sacramental mediation of grace, and the pastoral direction of the pilgrim People of God to the goal of eternal life. Since Peter confessed Jesus as the Son of the Living God on the basis of the Father’s Revelation, Christ gave him the promise: “You are Peter, and upon this rock I will build my (!) church.” (Mt 16:18).

A church totally fixated on the Pope was and always is the caricature of the Catholic “teaching about the institution, the perpetuity, the meaning and reason for the sacred primacy of the Roman Pontiff” (Lumen gentium 18). With this conception any ecumenism with the Orthodox and Protestants is doomed to fail from the start. Regarding the classical separation of potestas ordinis and jurisdictionis, which is supposed to establish a total papal jurisdiction, Vatican II renounced it because of its inadequacy. Already according to Thomas Aquinas, the potestas ordinis does not merely mean the authority to administer sacraments. Rather, potestas ordinis means, that in the ordination all powers are conferred, even if the pastoral office may be limited in its concrete jurisdiction. (S.th. II-II q. 39 a.3). Thus, there are not two equivalent categories of potestas ecclesiastica, but only the one potestas ordinis, of which the potestas jurisdictionis is an integral but subordinate part.

Also, the separation of the bishop of Rome with his potestas ordinis for his diocese from the potestas juridictionis of the Pope as successor of Peter for the Universal Church contradicts formally the dogma of of Vatican I (Dog. Const. Pastor aeternus 2. Cap. Canon: “Si quis dixerit…. Romanum pontificem non esse beati Petri in eodem primatu sucessorem anathema sit.” DH 3058). The Roman Curia is the institutionalized participation of the Roman Church in the Petrine primacy. It cannot be organized in a purely secular way according to the criteria of a multinational foundation. This seems to be the unresolved basic problem in the approach of “Praedicate Evangelium.” It takes revenge when, in the elaboration of important papal documents, systematic theology is neglected and instead of clear dogmatic principles a combination of spiritual desiderata and secular categories of power are the basic hermeneutical approach.

The Church as the universal sacrament of the salvation of the world is rooted in the Incarnation. We cannot, like the Protestants, split the Church into an invisible community of grace (communio) and a visible community of law (societas). The visible community of faith is not a religious organization founded by human beings, but the ecclesial-sacramental Body of Christ (Vat. II. Lumen gentium 8). It serves in martyria, leiturgia and diakonia the most intimate union of human beings with God and the unity of Humanity (LG 1). Therefore, it is always Christ Himself Who, through the bishop, teaches, sanctifies and governs pastorally or juridically (LG 20f). Neither the Pope and the bishops nor – as in the Protestant and Catholic church state system – the secular authorities or a mixed body of laymen and clergymen (see the German synodal aberration!) can lead the Church of God like a secular organization, be it in an authoritarian-monocratic, be it in a synodal-democratic form.

The Pope, however, is not a superbishop or absolute sovereign of the Church as if he shared in the Omnipotence of God, but as the head of the local church of Rome, he is the perpetual visible principle and foundation of unity in faith and communio ecclesiarum (LG 18: 23).

Nor can the Pope confer on any lay person extra-sacramentally – that is, in a formal, legal act – the power of jurisdiction in a diocese or in the Roman curia, so that the bishops or priests may act in his name. “Bishops, therefore, with their helpers, the priests and deacons, have taken up the service of the community, presiding in place of God over the flock, whose shepherds they are, as teachers for doctrine, priests for sacred worship” (Lumen gentium 20).

Contrary cases in the history of the Church and the Papacy are not theological arguments, but only evidence of deficient theology or of the abuse of spiritual authority for secular purposes. It bodes ill the suppression of the congregations of the cardinals (as a partial assembly of the consistory of all cardinals) in favor of formal equality of all the institutions of the Curia and the Holy See as bureaucratic, administrative authorities with the name of Dicastery.

Certainly, the dicastery for media communications can be headed by a competent layman, but precisely not the Congregations for the Doctrine of the Faith, the Liturgy, the Bishops, the Clergy, etc., whose prefects, as clerics of the Roman Church, work with the Bishop of Rome in his capacity as successor of St. Peter (in short, “the Pope”).

Consequently, the sacramentality of the episcopate also means that the bishops are neither deputies nor delegates of the pope (LG 27). They exercise the spiritual powers conferred on them by Christ during their ordination in the name of Christ, not in the authority of the Pope, as this extreme papalism of today again wants it. The deposition of a bishop or the moral pressure on him to resign voluntarily can be justified before God only as ultima ratio in view of the bonum ecclesiae. Necessary is a re-reading of “Praedicate evangelium” in the light of the binding doctrine on the Church in the Dogmatic Constitution of Vatican II., “Lumen gentium.”

Translation of the original text was provided by LifeSite’s Dr. Maike Hickson.