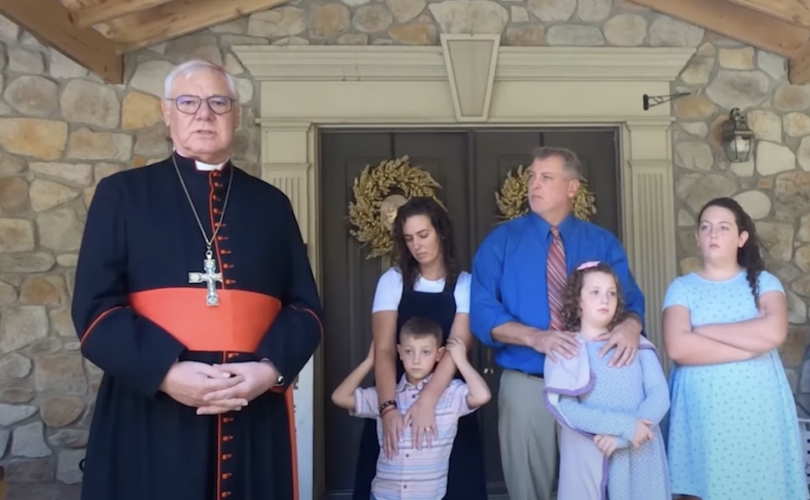 International Organization for the Family/YouTube

(LifeSiteNews) – Cardinal Gerhard Müller, the former head of the Congregation for the Doctrine of the Faith (CDF), on October 12 visited the family of Mark Houck in their home that was raided by FBI agents on September 23.

In a video published by International Family News, Cardinal Müller is seen greeting Mark Houck and his family in front of their house and giving a statement in support of the family while condemning the FBI raid.

“Persecution of the good people is always a sign of the beginning of dictatorship and tyranny,” the cardinal said. “We see this in all of the world but especially in the beginning with Herod in the New Testament” as well with the Russian war in Ukraine.

Cardinal Müller went on to explain that “democracy doesn’t work when there is no respect of basic rights of life and personal integrity of your body, and your liberty,” and that “we are citizens of the states and not serfs of some ideological leaders.”

The former head of the CDF made clear that the FBI’s actions against the Houck family were unacceptable:

The administration and government of democratic states have to serve the people and not the other way around. Therefore, I cannot accept the griefs of a peaceful father defending his son, defending the right of life of the babies, is so mistreated. This is not acceptable and this is a scandal. They are making America ridiculous in the eyes of society.

Cardinal Müller was referring to the incident that the FBI used as justification for the raid of the family’s house and the arrest of Houck. When Houck did sidewalk counseling at an abortion clinic in Philadelphia with his oldest son last year, a pro-abortion activist made very inappropriate remarks to his son. After Houck repeatedly told the pro-abortion activist to refrain from speaking to his son, the activist came into the son’s personal space, and at that point “Mark shoved him away from his child, and the guy fell back,” according to Houck’s wife.

Even though the man did not have any injuries, he tried to sue Houck, but the case was thrown out of court. The FBI still used this incident as a justification to raid the pro-life father’s home and arrest him in front of his children.

“As a cardinal of the Holy Roman Church, I can only condemn these actions against a very good family with seven children made by the federal police,” Cardinal Müller proclaimed.

READ: US bishop: Biden’s DOJ ‘picked the wrong guy to mess with’ in raiding Mark Houck

The German cardinal expressed his surprise that something like this would happen in the U.S. “Such actions are expected only in Hong Kong of the Chinese Communist police, and then how could it happen in a democratic state where natural law is the basis of the decisions of the American nation?”

Cardinal Müller repeated his strong condemnation of the acts against the Houck Family once more. “Therefore, as a Catholic bishop and cardinal, I condemn these actions against the non-armed families, against children, it’s threatening for children, terrorizing them. There’s no reason for this brutal action against this peaceful family.”

The cardinal pointed out that people in Western nations have no moral authority to condemn the war in Ukraine if “we are doing the same thing”:

I think they are making America ridiculous at a time of these killings of people in Ukraine. What moral authority do we have as the Western nations when we can’t speak against it, when we are doing the same things that are threatening the children?”

He also spoke about the duty to protect the life of the unborn and the immeasurable worth of human life:

This is the duty of everybody: to protect life. And nobody has a right to a definition that this life is worthy [to exist] and the other life is not worthy to exist. And we cannot help women with the killing of their babies, but to help that they accept the babies. And there’s no future also for America without the next coming generation, and this they also hope nobody can say. We have to protect the planet [but] every life or each life is more worthy [than] all the cosmos, as this is our Christian understanding of the existence, and we must speak against this nihilism.

Cardinal Müller ended his statement by saying that he hopes “that the American government will apologize for this brutal act against humanity.”

Mark Houck, standing in front of his house with his family and Cardinal Müller, recalled that when the FBI raided his home his “only desire” was to protect his children. “Do whatever you want to me, but don’t hurt them,” Houck said.

The father of seven children stated that the futures and the minds of his children were “fractured.” “They’re the real victims,” Houck stated. “But we claim victory in Christ.”

“To have the full support of Cardinal Müller, it means the world to us, and we’re so blessed with his Eminence to share a meal with us, and brought the full authority of his office to our family. So thank you again,” Houck said.

Cardinal Müller’s full statement in written form was published by International Family News and can be found here.