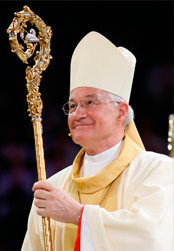 ROME, December 11, 2019 (LifeSiteNews) – Ordaining married men is “no solution for the shortage of priests,” Quebec Cardinal Marc Ouellet said in a new interview, revealing that he voted against adding that proposition to the Amazon Synod final document. He also said the pagan Pachamama statues that were present during various synod activities “did not bother me.”

“I don’t know the Amazonian culture sufficiently well to say what is the meaning of those symbols, but they did not bother me,” he said. “To say that there was adoration of idols is an exaggeration.”

Cardinal Ouellet, who serves as prefect of the Congregation for Bishops, made these comments in a December 5 interview with Spanish website Vida Nueva.

The recommendation that viri probati (mature married men) be ordained to the priesthood in “extraordinary cases” ultimately passed and was added to the synod final document.

“It don’t think that it is a solution. In this, the synod has disappointed me,” the cardinal said.

“There is pessimism regarding the ability of those cultures to live celibacy. It is a colonialist prejudice that I don’t share,” Ouellet said.

“Pachamama” is an Andean earth goddess, represented as a wood carving of a naked pregnant woman. An October 4 ceremony in the Vatican Gardens featured Amazon natives and at least one Franciscan prostrating themselves before two Pachamama statues as Pope Francis and other prelates looked on. The carving was later processed into the Basilica of St. Peter’s.

Confusion and controversy ensued when Vatican spokesmen described the effigy as a representation of Mother Earth, fertility, or motherhood. During the synod, Pachamama statues were displayed inside the church of Santa Maria in Traspontina – Ouellet’s titular parish.

On the morning of October 21, a 26-year-old Austrian named Alexander Tschugguel removed three Pachamama statues from Santa Maria in Traspontina and threw them into the Tiber. Pope Francis later issued a statement in which he apologized as “Bishop of Rome” for the removal of the “statues of the Pachamama” from the church. He claimed that they were there “without idolatrous intentions.”

Ouelett said that he hopes Pope Francis will issue an apostolic exhortation before the end of the year that will encompass the pontiff’s conclusions about the Amazon Synod. He said that he hopes that it will have a “more evangelical foundation than the [synod’s] final document.”

“I have my doubts about the adequacy of the hypothesis, as much for Amazonia as for other cultures where there is a shortage of priests,” he added.

The Amazon Synod’s final document also recommended that a specific rite of the Mass for the Amazon region be created and thus join the other 23 rites of the Catholic Church.

Ouelett said he would like to see a synod that embraces the universal Church, rather than focusing on specific regions, in order to address issues related to the priesthood. Regarding what he called the “missionary power” of the Latin rite of the Church, he asked: “Why imitate other communities that are less missionary that have a different view regarding the priesthood?”

The Canadian cardinal is the author of a new volume, Friends of the Bridegroom: For a Renewed Vision of Priestly Celibacy, which seeks to provide a deeper understanding of priestly celibacy and its place in evangelization.