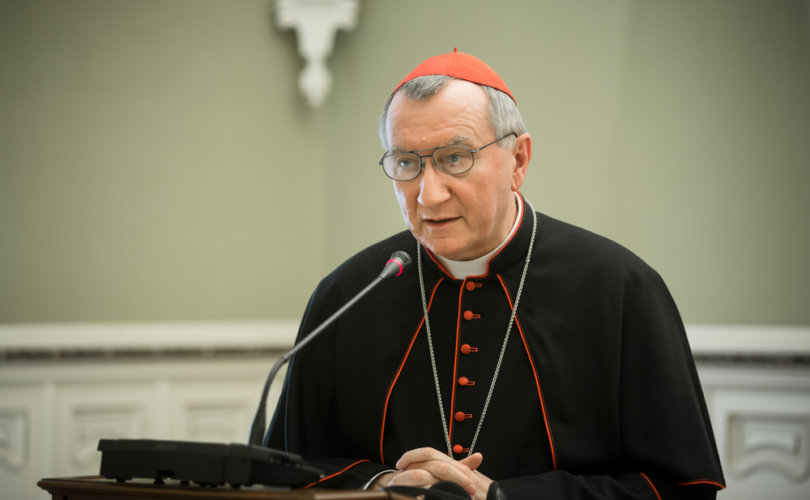 (LifeSiteNews) – In an address to Catholic television network EWTN, Vatican Secretary of State Cardinal Pietro Parolin stressed that he believes Catholic media’s “spirit of communion with” the pope should be a top priority.

Parolin said during the Wednesday evening address that “it is good” that Catholic media “feel that they are an active part of the life of the Church, first of all by living in a spirit of communion with the Bishop of Rome.”

“This is all the more urgent today in a time marked by overly dramatic debates, also within the Church, which do not even spare the person and the Magisterium of the Pontiff,” Parolin added. He also emphasized the importance of a “merciful style” and the promotion of “dialogue” by Catholic media.

He concluded his address to EWTN, “May this spirit of communion with the Pope be the distinctive sign of your work. May this be ‘felt’ and ‘touched’ in your television broadcasts, as well as in your articles and in your multimedia programs.”

While Parolin’s remarks came at EWTN’s invitation to share a reflection on truth and communication, many commentators have interpreted his address to be a rebuke of EWTN’s own frequent criticism of Pope Francis’ statements and actions.

Christopher Lamb, the Rome correspondent for the international Catholic news weekly The Tablet, pointed out in a comment on Parolin’s speech that “Pope Francis said last year that there is a ‘large Catholic television channel that has no hesitation in continually speaking ill of the pope.’”

Francis had said that the “Church does not deserve” such “attacks,” calling them “the work of the devil,” and adding, “I have also said this to some of them.”

At the time, America Magazine’s Gerard O’Connell explained that Pope Francis gave indications he was referring specifically to EWTN. Three different anonymous Vatican officials told America that Pope Francis had previously said to an EWTN reporter that the network “should stop speaking badly about me.”

LifeSiteNews has compiled a partial list of EWTN’s critical coverage of Pope Francis’ statements and actions that appear to reject Catholic Church moral teaching or undermine its practice.

It is notable that such criticism by EWTN, like that of LifeSiteNews, has always been given in the context of defense of such Catholic teaching and its practice. For example, the news network has sought to clarify Church teaching in the face of Pope Francis’ signaling that the divorced and remarried should be allowed to receive Communion, and to respond to his hosting of a pagan ritual in the Vatican featuring prostrations to the idol Pachamama, an “Earth Mother” deity worshipped by some indigenous Amazonians.

During the course of his pontificate, Francis has also told homosexuals that they are “born that way;” referred to gender-confused men as “girls;” taught against the death penalty, despite settled Church teaching on the matter; expressed openness to “women deacons;” welcomed pro-abortion public figures as Vatican experts; entered a pact with the Chinese Communist Party (CCP) surrendering the underground Church faithful there to CCP control; ignored the Dubia by four Cardinals concerning Amoris Laetitia, as well as Archbishop Carlo Maria Viganò’s testimony regarding his handling of then-cardinal Theodore McCarrick’s homosexual predation; warned Catholics not to “proselytize” their neighbors; and has suggested that God wills the “diversity of religions.”

While Parolin has referred to attacks on the so-called “Magisterium of the Pontiff,” there can be no authentic magisterium “of the Pope” that contradicts perennial Church teaching. Even the “merely” ordinary magisterium of the pope is never a new teaching, but is one that has been taught ubique, semper et ab omnibus (everywhere, always and by all).

This means that documents and statements issued by the Pope can only be considered authentic magisterium when they reinforce or “restat[e] the consistent teaching of his predecessors and of the bishops united with him around the world,” Fr. John Trigilio Jr. and Fr. Kenneth Brighenti have noted.

The above-cited actions of Pope Francis, by contrast, contradict or appear to defy the perennial Church magisterium.

Accordingly, Catholic podcaster Robert Nugent has protested papal biographer Austen Ivereigh’s defense of Parolin’s remarks as a “zinger address” that addresses EWTN’s supposed “3 sources of scandal: they think they are guardians of truth; they undermine papal magisterium & church communion; they erect a wall between Rome and U.S. Catholics.” Ivereigh was referring in part to Parolin’s remark in reference to “the truth,” that “we are its custodians, not its owners.”

“So were Catholics supposed to be quiet when professed religious prostrated themselves in front of the pachamama and the holy father sat in silence[?] Catholics have a duty to call out error,” Nugent responded to Ivereigh.

Ivereigh has publicly defended the prostrations even of Catholics before the Pachamama statues, saying soon afterward, “Nobody bowed down to idolatrous statues. They were Amazonian Catholics praying to Mother Earth,” as if praying to a fictitious personification of the earth was not idolatry by definition.

Brother Martin Navarro, a layman and founder of the Oblates of St. Augustine, has also pointed out that while Parolin has asked EWTN to “remain in communion with the Pope, Rome has yet to ask the same of the Flemish bishops giving blessings to same-sex unions,” even as a few individual clerics have condemned the so-called rite of blessing.

Despite the fact that EWTN is “not a traditionalist outlet,” but is, according to Stine, “best described as a moderate Novus Ordo outlet with some conservative Novus Ordo figures like Raymond Arroyo,” “for the radical modernists in Rome it’s all the same thing: a resistance to the building of the ape of the church,” Stine said.

[The Antichrist] will have one great secret which he will tell to no one: He will not believe in God. Because his religion will be brotherhood without the fatherhood of God, he will deceive even the elect. He will set up a counterchurch which will be the ape of the Church, because he, the Devil, is the ape of God. It will have all the notes and characteristics of the Church, but in reverse and emptied of its divine content. It will be a mystical body of the Antichrist that will in all externals resemble the mystical body of Christ.