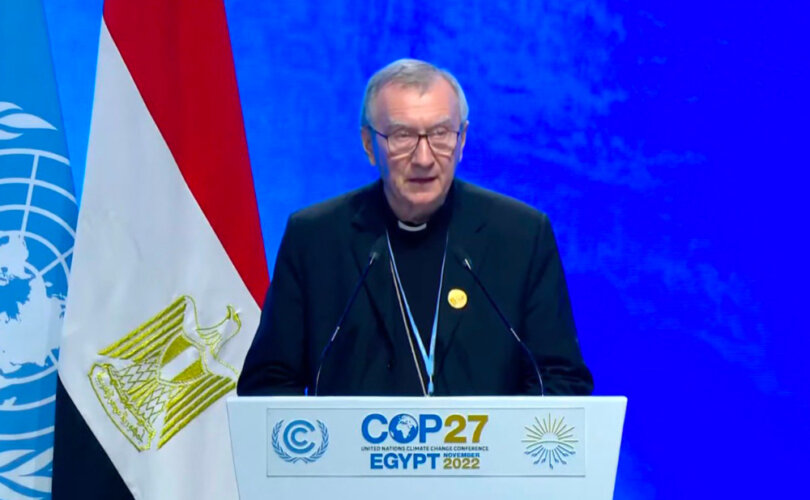 Cardinal Parolin delivered his address in the Egyptian, coastal city of Sharm el-Sheikh while attending the United Nations Climate Change Conference of the Parties (COP), which is now in its 27th event.

The conference, running from November 6 – 18, is following the previous years’ events “with the key aim of ensuring full implementation of the Paris Agreement.” Lauded by “climate change” activists as a document which could usher in seismic change to save the world from natural disasters, the Paris Agreement is an international contract purportedly aimed at reducing global average temperatures, but which includes as part of its goals the expansion of abortion and contraception, among other population control measures.

Parolin noted that while the Vatican has sent messages addressing previous COP summits, this year’s event is the first “to which the Holy See participates as a State Party to both the Convention and the Paris Agreement.”

“This important step is consistent with Pope Francis’ announcement in 2020 that the Holy See would commit to the goal of net-zero emissions,” said Parolin.

Addressing the participants, Parolin spoke of “the socio-ecological crisis,” calling it “a propitious moment for individual and collective conversion and for concrete decisions that can no longer be postponed.”

Arguing that “the human face of the climate emergency challenges us deeply,” Parolin stated that “we have a moral duty to act concretely in order to prevent and respond to the always more frequent and severe humanitarian impacts caused by climate change.”

Parolin – who has been Vatican Secretary of State since 2013 – continued by informing the assembled global leaders, politicians and “climate activists” that COVID-19 and military conflicts were also affecting “climate change.”

Worryingly, we must admit that global events like COVID-19 and the increasing number of conflicts all over the world, with their serious ethical, social and economic consequences, risk undermining global security, exacerbating food insecurity, jeopardizing multilateralism, and even overshadowing our efforts here in Sharm el-Sheikh.

“Climate change will not wait for us,” added the cardinal, calling for “international and intergenerational solidarity” in order to forestall any detrimental effects of “climate change.”

Parolin highlighted what he called the “four pillars of Paris Agreement: mitigation, adaptation, finance, and loss and damage.” These aspects, he said, “are interconnected and are a matter of fairness, justice and equity,” to which he added that the attendees “have a lot to learn from indigenous peoples” in terms of maintaining “heritage and cultures.”

In closing, Parolin re-emphasized the Vatican’s commitment to the “climate change” goals, as outlined by the Paris Agreement, which the Vatican joined earlier this year.

By acceding to the Convention and the Paris Agreement, the Holy See is even more committed to moving forward on this journey together, for the common good of humanity and especially on behalf of our youth, who are looking to us to care for present and future generations.

The Vatican made a surprise announcement on July 8, declaring that it had formally joined the United Nations Framework Convention on Climate Change (UNFCCC) and the Paris Climate Agreement, having delivered the required documentation to the United Nations on June 6. The documents entered into force on October 4 – a day which was celebrated by the Vatican.

As already extensively reported by LifeSite, the pro-abortion Paris Agreement connects to the stated U.N. goal of creating a universal right to abortion in line with Goal #5.6 of the UN’s Sustainable Development Goals.

Pope Francis previously sent messages of encouragement to global leaders at COP events, urging them to pursue the “ambitious goals” outlined in the Paris Agreement on climate change, saying they “can no longer be deferred.”

In Francis’ message to last year’s COP26 event, as with Parolin’s recent address, Christianity was not mentioned, nor was any spiritual or moral crisis.