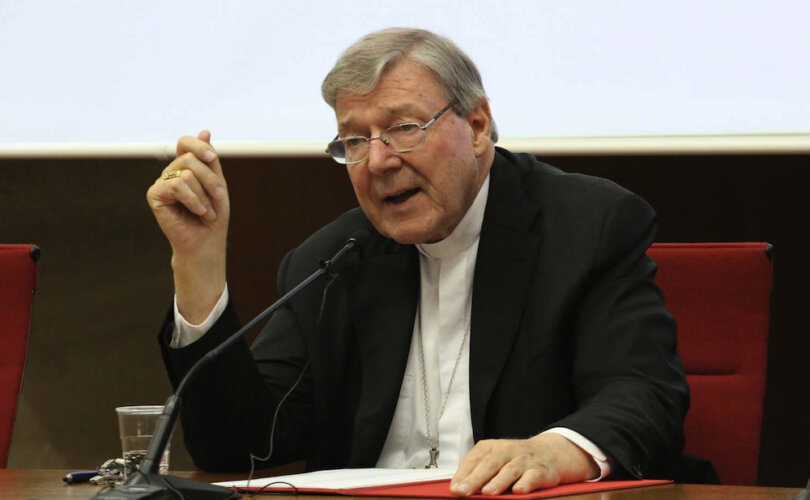 Pell expressed his criticism of the Synod in an article that was published on January 11 in the British The Spectator magazine.

“The Catholic Synod of Bishops is now busy constructing what they think of as ‘God’s dream’ of synodality,” Pell wrote. “Unfortunately, this divine dream has developed into a toxic nightmare despite the bishops’ professed good intentions.”

The Australian prelate had similarly strong words for the highly controversial Synod document calling for “inclusion” of LGBT groups and proposing a female diaconate; he declared it “the most incoherent document ever sent out from Rome.”

Pell noted that “[t]he document does not urge even the Catholic participants to make disciples of all nations (Matthew 28:16-20), much less to preach the Saviour in season and out of season (2 Timothy 4:2).”

“What is one to make of this potpourri, this outpouring of New Age good will?” Pell asked. “It is not a summary of Catholic faith or New Testament teaching. It is incomplete, hostile in significant ways to the apostolic tradition, and nowhere acknowledges the New Testament as the Word of God, normative for all teaching on faith and morals. The Old Testament is ignored, patriarchy rejected, and the Mosaic Law, including the Ten Commandments, is not acknowledged.”

Pell also critiqued the language used in the Synod document, saying it is “neo-Marxist jargon about exclusion, alienation, identity, marginalization, the voiceless, LGBTQ, […]” and observed also “the displacement of Christian notions of forgiveness, sin, sacrifice, healing, [and] redemption” in the document.

READ: Swiss bishop condemns the Synod on Synodality as a ‘marketing campaign’ for heresy

— Article continues below Petition —
Stand with brave priest who was SUSPENDED after defying the LGBT agenda against his abbot’s wishes!
Show Petition Text
12825 have signed the petition.
Let's get to 15000!
Thank you for signing this petition!
Add your signature:
Show Petition Text

In a sadly prophetic manner, Pell reminded his readers – and the authors of the synod document – of the inevitable finitude of life. “Why the silence on the afterlife, of reward or punishment, on the four last things; death and judgement, heaven and hell?” he asked shortly before his own earthly life drew suddenly to a close.

“So far the synodal way has neglected, indeed downgraded the Transcendent, covered up the centrality of Christ with appeals to the Holy Spirit and encouraged resentment, especially among participants,” the late prelate lamented.

READ: Dutch bishop leaves ‘vile’ Synod on Synodality: ‘The Holy Spirit has absolutely nothing to do with it’

Cardinal Pell also accused an Luxembourger prelate of open heterodoxy, saying that “as the Relator (chief writer and manager) [of the Synod document] Cardinal Jean-Claude Hollerich has publicly rejected the basic teachings of the Church on sexuality, on the grounds that they contradict modern science.”

Because of Hollerich’s heterodoxy, Pell believed the “two final synods in Rome in 2023 and ’24 will need to clarify their teaching on moral matters.”

Pell also criticized the organizational structure of the Synod on Synodality, pointing out that “[t]he main actors in all Catholic synods (and councils) and in all Orthodox synods have been the bishops.” In this Synod, however, “only the organizing committee’s views” would be passed on “to the Holy Father for him to do as he decides,” which “is an abuse of synodality, a sidelining of the bishops, which is unjustified by scripture or tradition.”

“It is not due process and is liable to manipulation,” he stated.

Pell stressed that “[w]orking documents are not part of the magisterium” but only a “basis for discussion; to be judged by the whole people of God and especially by the bishops with and under the Pope.”

Cardinal Pell became world-famous after he was unjustly convicted of child sexual abuse and imprisoned in 2019. After over 400 days behind prison bars, he was unanimously acquitted by the Australian High Court in 2020.

Pell courageously defended the Catholic faith and was an important voice of orthodoxy, especially in the doctrinally confusing times of the Francis pontificate. He publicly criticized the Synod on Synodality, the German Synodal Way, and even warned against the documents of the Amazon Synod while he was still imprisoned.

News of Pell’s unexpected death has swept through the online Catholic world, with many Catholics quick to respond. Particularly notable was the number of priests and bishops who spoke of their appreciation and affection for the cardinal.

LifeSiteNews invites its readers to pray for the repose of Cardinal Pell’s soul.