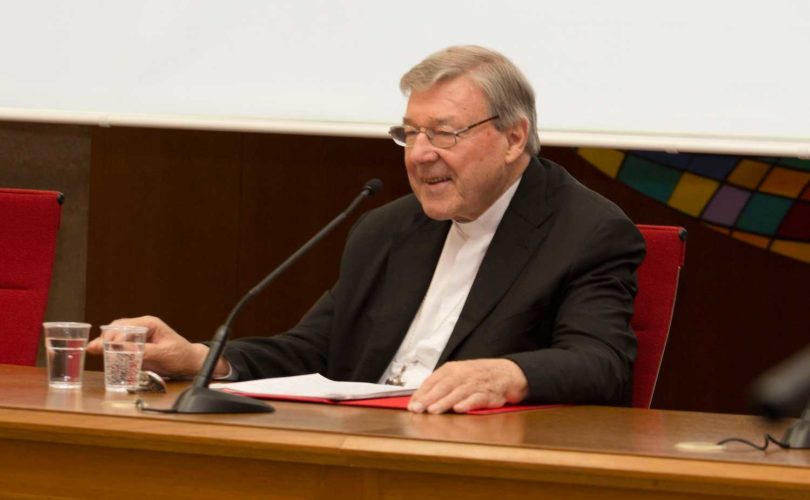 “Cardinal Pell is obviously disappointed with the decision today,” Pell’s spokeswoman, Katerina Lee, said in a statement on behalf of the cardinal.

“However his legal team will thoroughly examine the judgement in order to determine a special leave application to the High Court,” she continued.

“While noting the 2-1 split decision, Cardinal Pell maintains his innocence. We thank his many supporters.”

The Holy See and the Archbishop of Sydney have also underscored the Cardinal’s unwavering assertion that he is not guilty. Pell’s friends and supporters have published defences of the cardinal while condemning the court’s decision.

While explaining the Court’s reasoning, Supreme Court Chief Justice Anne Ferguson noted how the case has “divided the community.”

“There has been vigorous and sometimes emotional criticism of the Cardinal, and he has been publicly vilified in some sections of the community,” Ferguson remarked. “There has also been strong support for the Cardinal by others. Indeed, it's fair to say that this case has divided the community.”

Members of the Catholic press have furiously denounced the Australian court. One of his most vociferous foes in the Australian media has exulted in the Court of Appeal decisions. The Vatican along with Australian bishops, however, have offered more measured statements.

Author and historian George Weigel, an old friend of Cardinal Pell, wrote an impassioned denunciation of the Court of Appeal’s decision in an article for First Things titled “The Australian Disgrace.”

“… This astonishing, indeed incomprehensible, decision calls into the gravest doubt the quality of justice in Australia—and the possibility of any Catholic cleric charged with sexual abuse to receive a fair trial or a fair consideration of the probity of his trial,” Weigel wrote.

Weigel asserted that there was no evidence for the charges made against Pell: only the word of the complainant, whose story was “alarmingly similar” to false accusations made against a priest in a story in Rolling Stone magazine.

The writer noted that two months ago the same justices grilled the prosecution and seemed very sympathetic to the arguments put forward by Pell’s defense team. He wondered what had happened in the ensuing two months, and said it was worth pursuing.

Weigel asserted that even senior members of the legal profession in Australia fear for the reputation of their nation’s justice system.

“Since the Pell conviction, friends well connected in Australian legal circles have said that the serious legal community in Australia, as distinguished from ideologues, was becoming deeply concerned about the reputation of Australian justice; thus, it was said, many of those senior legal figures were hoping that the cardinal’s appeal would succeed,” he wrote.

“Their concerns should now be intensified by orders of magnitude. For on the evidence of this shabby case and this appalling and thoroughly unpersuasive appellate decision, reasonable people will wonder just what ‘rule of law’ means in Australia, and especially in the state of Victoria.”

The Director of the Sala Stampa, the Vatican’s principal media office, expressed “respect” for the Australian justice system but noted that Pell has always maintained his innocence and has a right to another appeal.

“As the proceedings continue to develop, the Holy See recalls that the Cardinal has always maintained his innocence throughout the judicial process and that it is his right to appeal to the High Court.”

“At this time, together with the Church in Australia, the Holy See confirms its closeness to the victims of sexual abuse and its commitment to pursue, through the competent ecclesiastical authorities, those members of the clergy who commit such abuse,” he said.

Archbishop Anthony Fisher, OP, Cardinal Pell’s successor as the Ordinary of the Archdiocese of Sydney, released a statement asking the public to remain calm. Also mentioning that Pell has “strenuously maintained his innocence,” Fisher noted that many people disagree on the issue.

“Today’s split decision amongst the judges is consistent with the differing views of the juries in the first and second trials, as well as the divided opinion amongst legal commentators and the general public,” the archbishop wrote.

“Reasonable people have taken different views when presented with the same evidence and I urge everyone to maintain calm and civility.”

Fisher added that he was limited in what he could say because the Cardinal may decide to appeal the judgment to Australia’s High Court. Meanwhile, the Vatican, not the Australian Church, is responsible for Pell’s canonical status. He believes, however, that the Holy See will not determine this until after “the appeal process has been exhausted.”

He too expressed solidarity with victims of sexual abuse but also spared a thought for Pell’s supporters.

“I know that there are many in the Catholic community and beyond who will find it difficult to come to terms with this judgment, especially those who know the Cardinal and will struggle to reconcile this outcome with the man they know. I thank them for persevering in faith, hope and love,” Fisher wrote.

“As we wait to hear whether the legal process will continue, I will seek to provide pastoral support to those Catholics who may have found their faith tested.”

Archbishop Peter A. Comensoli of Melbourne, the city in which Pell was tried and imprisoned, encouraged the public to receive the justices’ decision “respectfully.”

“I respectfully receive the Court’s decision, and I encourage everyone to do the same,” he wrote.

Comensoli’s statement was markedly less sympathetic to Pell and his supporters than Fisher’s. He said that his “thoughts and prayers” were with Pell’s accuser, “humbly” acknowledged that it had been a “challenging time for him” and said he was ready to “offer pastoral and spiritual help, should [the complainant] seek it.

Comensoli pledged to make sure the cardinal receives pastoral care while he is imprisoned in the Melbourne diocese.

“In Christian charity, I will ensure that Cardinal Pell is provided pastoral and spiritual support while he serves the remainder of his sentence, according to the teaching and example of Jesus to visit those in prison.”

Australian Broadcasting Corporation (ABC) reporter Louise Milligan, who professes herself convinced of Cardinal Pell’s guilt, made the two choirboys at the heart of the case the subject of her reflections after the Court of Appeal decision.

She said that she is the only journalist that has met with the complainant and with others who have made allegations against Cardinal  Pell, and that she has never had reason to believe the complainant wasn’t telling the truth.

Milligan painted the trial as a “David and Goliath” story, with Pell as Goliath.

“It's the ultimate David and Goliath tale of a young man who never sought fame, just wanted justice, against a well-resourced defendant who has for years cultivated and been supported by the powerful,” she said.

“Imagine taking on Cardinal George Pell: the third most senior person in the worldwide Catholic Church. A man supported by two former prime ministers who didn't spend a minute in court, didn't hear or read a word of your evidence and yet nonetheless, by implication, branded you a liar.”

She noted that the second choirboy in the case, who died of a drug overdose when he was 31, had told his mother that he had never been interfered with. However, Milligan cited the Royal Commission into Institutional Responses to Child Sexual Abuse, which she said found that victims of Catholic clergy took “an average of 33.3 years to come forward.”

“R was well inside that time frame when his addiction took him from his mum's life,” Milligan wrote.

“She's left with the gaping hole in her heart her son left behind and the acceptance that justice, of some sort, has been served.”

Matthew Schmitz, also writing for First Things, said that the decision was an “outrage.”

“The conviction of Pell is an outrage—not because he is a cardinal of the Catholic Church, but because the case against him was not proved, and could not be proved, beyond a reasonable doubt,” he wrote.

Schmitz called the complainant’s story “both uncorroborated and implausible” and compared the treatment meted out to Pell to that accorded ex-cardinal McCarrick.

“The charges against Pell, unlike many of the thoroughly corroborated charges against former cardinal Theodore McCarrick, do not fit this pattern [of clerical sexual abuse]. It is interesting to consider that Pell sits in jail while McCarrick walks free.”

Schmitz revisited the frenzied hatred of much of the Australian media for Pell, especially that of the ABC's Louise Milligan, who wrote a book denouncing the cardinal. The First Things editor found in her reaction to the Cardinal’s conviction evidence that Catholicism itself was an object of her hatred.

He closed his piece by suggesting that no Catholic can live and express his faith in safety.

“It is now clear, if it was not before, that Catholics cannot expect just and fair treatment at the hands of our liberal elite,” he wrote.

“Paper guarantees of due process and equal rights are of little value in the face of overwhelming prejudice. Regrettably, prejudice of the kind that has put Pell in prison is reliably generated by the liberal order so many Catholics are eager to defend.”