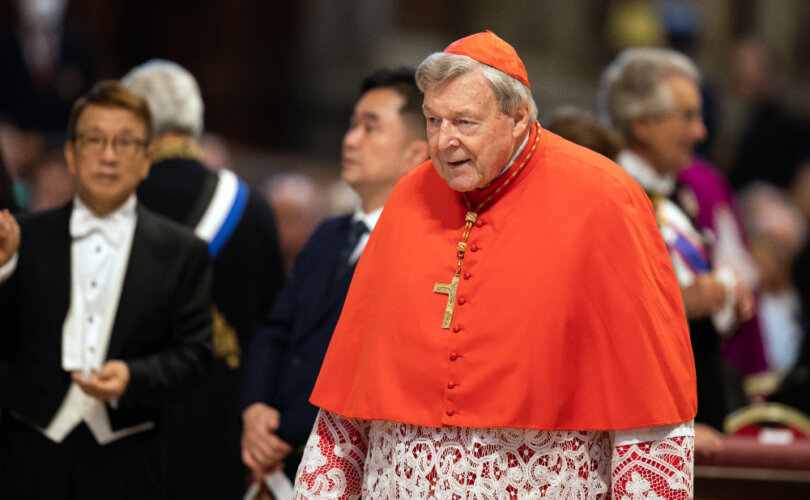 Cardinal George Pell at the August 2022 Consistory of Cardinals. Mazur/cbcew.org.uk/Flickr

VATICAN CITY (LifeSiteNews) –– The veteran Vatican journalist Sandro Magister has reported that the late Cardinal George Pell was the author of a 2022 memo sent to cardinals which severely criticized Pope Francis and highlighted key issues the next pope would need to address.

Writing on his blog January 11, Magister stated that Pell, who died on Tuesday, was the author of a memo which Magister had reported on in March 2022. The memo was pseudonymously authored by “Demos,” and presented numerous criticisms of the Francis Vatican, along with topics needing to be addressed by the next pope.

It was Pell who was the author of that memo signed ‘Demos,’ highly critical of Francis’ pontificate, which circulated among cardinals last spring, ahead of a future conclave, published by Seventh Heaven on March 15.

There had been some speculation that Pell was behind the memo, but Magister’s revelation appears to put the matter to rest.

In a comment to LifeSiteNews, Magister stated that he had “personally received the memo signed Demos (original in English) from Pell, with permission to publish it, provided the name of the real author is kept confidential.”

The original memo “was written all and only by him [Pell], from the first to the last line,” said Magister.

‘Demos’ memo and its advice to cardinals

At the time of the memo’s original publication on Magister’s blog, the Vaticanista wrote that “Demos” had shown himself to be “a thorough master of the subject. It cannot be ruled out that he himself is a cardinal.”

Magister stated that the memo had been circulating amongst the cardinal electors since the beginning of Lent.

The contents of the memo are firm, precise and damning towards the Vatican under Pope Francis. It opened with a summary of such criticisms, with “Demos” stating:

Commentators of every school, if for different reasons, with the possible exception of Father Spadaro, SJ, agree that this pontificate is a disaster in many or most respects; a catastrophe.

The author argued that while Rome, as the seat of the popes, had previously been a voice of clarity, today is was a promoter of confusion. “Previously it was: ‘Roma locuta. Causa finita est.’ Today it is: ‘Roma loquitur. Confusio augetur’.”

Demos outlined 6 major points on which Francis’ Vatican was promoting this confusion, starting with Francis’ tolerance and silence in the face of moral and doctrinal errors being spread by various prelates.

He referred to the heterodoxy pushed by the German episcopate in the Synodal Way, and Cardinal Jean-Claude Hollerich’s promotion of homosexuality. “The Papacy is silent,” wrote Demos, a fact which is “emphasized when contrasted with the active persecution of the Traditionalists and the contemplative convents.”

The memo’s author also highlighted the hijacking of formerly pro-life institutions, such as the Roman Institute for the Family and the Pontifical Academy for Life. With this, Demos declared that the “Christo-centric legacy of St. John Paul II in faith and morals is under systematic attack.”

‘The Vatican’s political prestige is now at a low ebb’

Magister’s statement that it was Pell who authored the memo gains traction given the amount of details which “Demos” presents about the state of the Vatican’s legal and financial corruption. Pell was a key figure in attempts to implement financial reforms in the Vatican, uncovering widespread misconduct – misconduct which is now the subject of two high profile legal cases in the Vatican.

Many of the details recounted reflect the financial corruption which Pell was tasked with tackling. The memo notes that Francis turned against the process of financial reform in favor of (then) Archbishop Angelo Becciu, who was one of Pell’s leading opponents. Francis subsequently then “turned on Becciu,” continues the memo – although after the memo was published Becciu has been rehabilitated by Francis, despite being on trial for corruption.

This corruption spilled over into the Vatican’s political situation, argued “Demos,” who said that Francis and the Vatican were now “negligible” in the global political sphere. Francis favored “politically correct” decisions, rather than those which supported “human rights,” the memo argued.

Evidence of this was provided in the Vatican’s effective abandonment of Chinese Catholics, “who have been intermittently persecuted for their loyally to the Papacy for more than 70 years.”

“Demos” also criticized both the treatment of Catholics devoted to the traditional Mass, as well as the liturgical restrictions in the Vatican itself. “At the moment, this great basilica is like a desert in the early morning,” Demos wrote, adding later:

The Holy Father has little support among seminarians and young priests and wide-spread disaffection exists in the Vatican Curia.

Advice for the next Conclave

“The College of Cardinals has been weakened by eccentric nominations,” wrote “Demos” in commencing what is essentially a tick list for the cardinals tasked with electing the next pontiff.

After Vatican II, Catholic authorities often underestimated the hostile power of secularization, the world, flesh, and the devil, especially in the Western world and overestimated the influence and strength of the Catholic Church.

Appearing to take aim at Francis, “Demos” wrote that the next pope “must understand that the secret of Christian and Catholic vitality comes from fidelity to the teachings of Christ and Catholic practices. It does not come from adapting to the world or from money.”

As such, “Demos” instructed the cardinals that the new pope first swiftly “restore normality, restore doctrinal clarity in faith and morals, restore a proper respect for the law and ensure that the first criterion for the nomination of bishops is acceptance of the apostolic tradition.”

“Demos” also took aim at the Synodal process, particularly Germany’s Synodal Way. Should this go unchecked, he wrote, without a “Roman correction of such heresy, the Church would be reduced to a loose federation of local Churches, holding different views, probably closer to an Anglican or Protestant model, than an Orthodox model.” This echoes Pell’s criticism of the Synod on Synodality – written before he died and published one day after – describing it as a “toxic nightmare.’’

While noting the decline in priestly vocations, “Demos” called for a “serious consideration” to “be given to the feasibility of a visitation on the Jesuit Order,” since it “is highly centralized, susceptible to reform or damage from the top.”

He closed by referring once again to the significant “financial” reforms needed in the Vatican, but clarified that such issues are “much less important than the spiritual and doctrinal threats facing the Church, especially in the First World.”