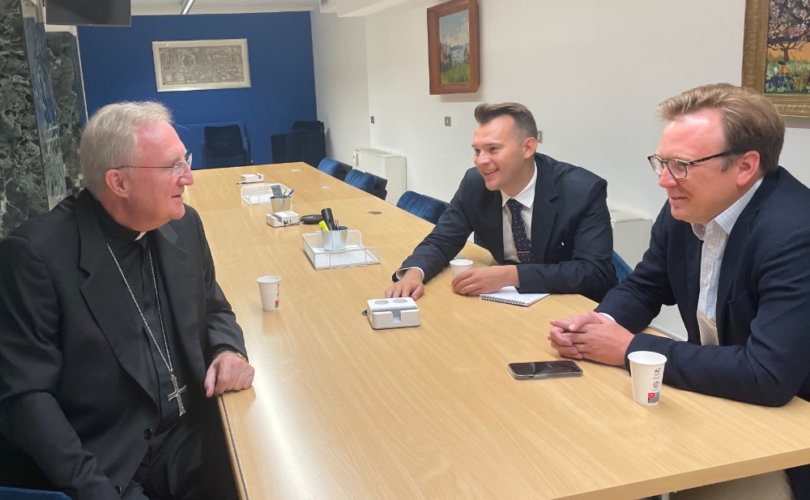 VATICAN CITY (LifeSiteNews) — Newly appointed Cardinal Arthur Roche, head of the Vatican’s liturgy department – the Congregation for Divine Worship and the Discipline of the Sacraments (CDW) – has stated that devotion and adherence to the Latin Mass is a mark of being “more Protestant than you are Catholic.”

Cardinal Arthur Roche made his comments in conversation with two Rome correspondents for dissident publications The Tablet and the National Catholic Reporter.

As head of the Congregation (now Dicastery) for Divine Worship, Roche has been notable in his defense and promotion of Pope Francis’ severe restrictions on the traditional Mass as contained in Traditionis Custodes, as well as his own subsequent Responsa ad dubia which contained even further restrictions.

The Novus Ordo Mass, born out of and after the Second Vatican Council, was part of a necessary “reform,” said Roche. “After two world wars which had been initiated in the heart of Christian Europe, it was obvious that there needed to be an enormous reform within the Church,” he stated.

Citing this “reform,” Roche criticized “those who are dragging their feet,” suggesting that by opposing this “reform” they are becoming “Protestant.”

That’s a very serious matter. In the end, people have to ask themselves: am I really a Catholic, or am I more of a Protestant?

He described the Second Vatican Council as “the highest legislation that exists in the Church,” claiming that “if you disregard that, you are putting yourself sideways, to the edges of the Church. You are becoming more Protestant than you are Catholic.”

— Article continues below Petition —
PETITION: We won't give any money to liberal bishops who attack the Faith
Show Petition Text
10280 have signed the petition.
Let's get to 12500!
Thank you for signing this petition!
Add your signature:
Show Petition Text

Prior even to the 2021 release of Traditionis Custodes, Roche penned a letter to the bishops of the world in 2020, attacking the traditional Mass and praising the Second Vatican Council’s paradigm shift in its view of the Church. He hailed the fact that the Council had removed the notion of the Church as a “perfect society and a world power to be contended with,” and instead was viewed as “constantly open to reform and conversion.”

Roche described the Novus Ordo, as the “good fruit from the tree of the Church” and called it an “ecclesiastical duty” to implement the Novus Ordo, criticizing how the Latin Mass did not promote the community celebration by the laity, but instead had “the priest alone as celebrant.”

Roche’s most recent comments, exaggerating the weight of Vatican II – echoing similar comments he has made previously – come in contradiction to the words of Pope John XIII, who in his opening address for the Council described it as only “pastoral.” The Pontiff outlined that it would be “pastoral” in nature, and instead of innovating, would “work out ways and means of expounding these truths in a manner more consistent with a predominantly pastoral view of the Church’s teaching office.”

Roche’s comments attacking devotees of the Latin Mass as “Protestant” build upon a number of interviews he has given in the last 12 months.

In late 2021, Roche described the current provision of the Latin Mass as an “experiment” which “has not entirely been successful,” saying that the Church should instead go back to what “the [Second Vatican] Council required of the Church” – the Novus Ordo. The provision of the Latin Mass in recent decades was simply to encourage the Society of St. Pius X “to return to full unity with the Church,” Roche stated.

Earlier this year, Roche doubled down on his opposition to the “Mass of Ages,” saying “it is not the norm. It is a pastoral concession.” “To stand against Peter is an astonishing act, full of hubris,” Roche added, hinting that support for the Latin Mass was an act of resistance to the Papacy.

Then speaking to Vatican News after Francis announced Roche would be made cardinal, the Yorkshire-born prelate stated that the liturgical “reform” of the Council was “not something to be taken as an option.”

All that is taking place is the regulation of the former liturgy of 1962 Missal by stopping the promotion of that, because it was clear that the Council, the Bishops of the Council, under the inspiration of the Holy Spirit, were putting forward a new liturgy for the vital life of the Church, for its vitality.

Yet Roche’s moves against the traditional Mass have been criticized by the former prefect of the Apostolic Signatura, his (now fellow cardinal) Raymond Leo Burke. Speaking to Ed Pentin of the National Catholic Register in February, Burke described Roche’s Responsa ad dubia as “confused” and “contradictory.” Burke stated that “what the congregation [CDW] pretends is not only contrary to the good order of the Church but contrary to reason.”

Now raised to the cardinalate, Roche looks set to continue his restrictions on the Latin Mass in line with Pope Francis, with the new cardinal addressing the Pontiff on Saturday thus: “Our mission today is to help you carry this cross and not to increase its weight.”

An earlier version of this article mistakenly referred to reporter Christopher White as an “Englishman.” LifeSiteNews regrets the error.