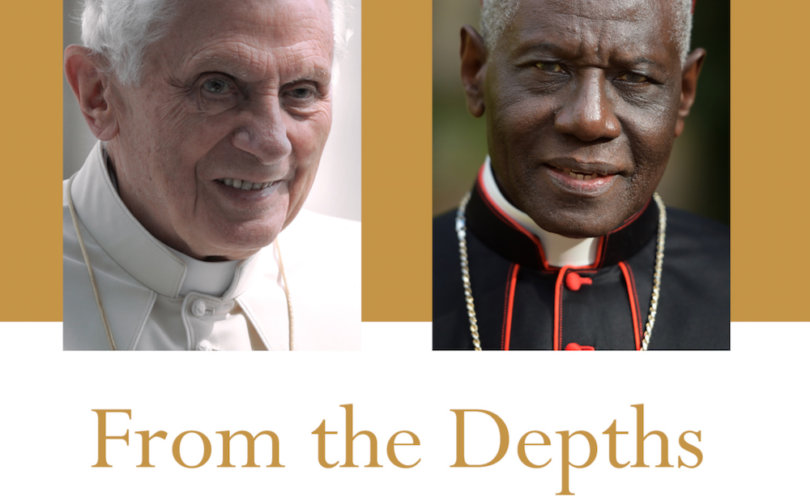 ROME, January 27, 2020 (LifeSiteNews) – Cardinal Robert Sarah has condemned the “brutality” and the “indecency” of attacks made on Pope Emeritus Benedict XVI when news of their co-authored book defending priestly celibacy emerged.

Speaking to Italian newspaper Il Foglio, which published an interview with the Guinean cardinal on January 25, Sarah said there has been “a lot of talk about utterly ridiculous aspects secondary” to the themes of the book.

“Absurd controversies, vulgar lies, and horrible humiliations have followed one another against Benedict XVI and me,” the cardinal continued.

However, it is the attacks on the former that have wounded Sarah the most.

“What breaks my heart and hurts me deeply is the brutality, the irreverence, the lack of consideration and the indecency with which Benedict XVI has been treated,” he said.

Cardinal Sarah and Pope Emeritus Benedict XVI are the co-authors of a book on challenges to the priesthood today. Entitled From the Depths of Our Hearts: Priesthood, Celibacy, and the Crisis of the Catholic Church in English, the Italian version of the book will appear in bookstores on January 30, published by Cantagalli.

“Without animosity, without attacking anyone, we have offered our reflections with clarity, rigor and fidelity to the truth on an essential question: the Catholic priesthood and celibacy,” Sarah said.

The cardinal underscored that there is no attitude of opposition to Pope Francis in the book. Meanwhile, he said the Pope Emeritus “personally confirmed with me that he welcomes this book and is happy with its publication.”

“The entire text is therefore the same, except for the introduction and conclusion, which the Cantagalli publishing house has explained,” Sarah continued.

“Now I ask that the sterile polemics cease.”

A source has given LifeSiteNews a copy of the original manuscript of the Italian version of the book. In it, both the Pope Emeritus and Cardinal Sarah have signed both the introduction and the conclusion. In the expurgated form, Benedict’s name will be removed from these short chapters. Meanwhile, the title pages of the file sent to LifeSiteNews clearly display both “Benedetto XVI” and “Robert Sarah” as the authors of Dal Profondo del Nostro Cuore. The Italian translation was prepared by Davide Riserbato.

Cardinal Sarah said the message of the book is that “if the law of celibacy is weakened, even for a single region, it will make a break, a wound in the mystery of the Church.” He believes that a priesthood for married men cannot be created “without damaging the priesthood of Jesus Christ and of His spouse, the Church.”

Regarding so-called “women’s ministries,” Sarah asks himself if “we are searching for fidelity to God or if we are following fashion.” He believes that St. John Paul II has already adequately described the role of women in the Church.

“St. John Paul II (said) in his apostolic letter Mulieris Dignitatem (that) their place is central. It is a matter of reminding everyone of the necessity of holiness and to help humanity not to fall.”

The cardinal also said he had offered his book respectfully and in a filial way to Pope Francis “but also to the bishops, priests, and Christian faithful throughout the world to sustain them and encourage them in deepening their reflection without being prejudiced by the (mainstream) media campaign that surrounded the last Synod and offered hurried, ideological and purely human solutions.”

When excerpts of the French edition of the book were first released earlier this month, some of Pope Emeritus Benedict XVI’s most vociferous critics attacked him on social media.

Joshua McElwee of the National Catholic Reporter suggested that by writing about the celibate priesthood the Pope Emeritus was opposing the plans of Pope Francis.

“It comes as Pope Francis is considering allowing married priests in the Amazon region.”

McElwee said he found this “incredible.”

“As I digest this, I'm realizing how incredible it is (:)A former pope speaking in public about something his successor is currently in the process of considering,” he wrote.

Father James Martin, SJ, of America magazine said he found the news “hard to fathom” and criticized Benedict for speaking out.

“I have the greatest respect for Pope Emeritus Benedict XVI,” Martin tweeted.

“Nonetheless, when he resigned the papacy, he said he would remain ‘hidden from the world,’” he continued.

“(…) But here, he is speaking out on an issue that was one of the main topics for the recent Synod on the Amazon and is now under consideration by the Pope.”

Martin, known for his LGBT advocacy, added that people might interpret this action as a “great theologian contributing to the conversation” but that others might see it as “a ‘parallel magisterium,’ which can lead to disunity.”