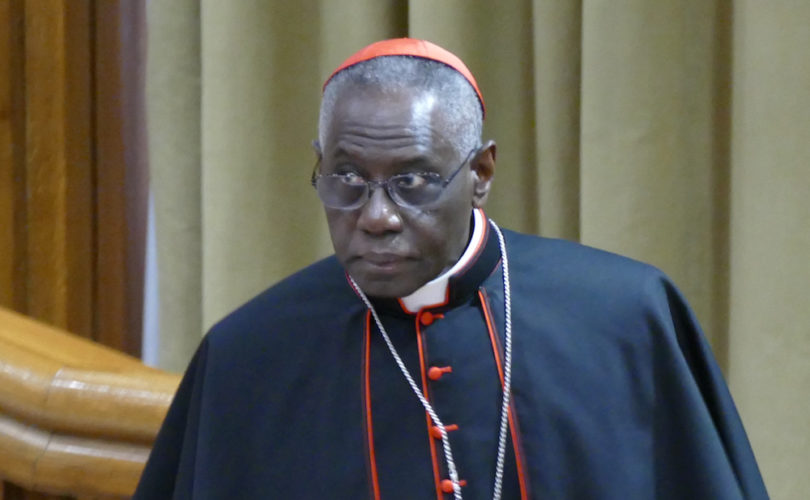 January 17, 2020 (LifeSiteNews) – In a series of three tweets today, Cardinal Robert Sarah attempted to settle once and for all the controversy that has swirled around his and Pope Emeritus Benedict XVI’s co-authorship of a book on priestly celibacy.

Some had accused Sarah of manipulating Pope Benedict, said that Benedict was not really a co-author of “From the Depths of Our Hearts” (De Profondeurs de nos cœurs), and said that the Pope Emeritus’ name did not actually belong on the cover.

The fire of controversy seemed destined to become a full-fledged conflagration when Antonio Socci, an Italian Catholic journalist, reported on social media that Pope Francis was infuriated with Pope Benedict’s involvement with the book.

“The end of the world broke out in the Vatican because Bergoglio was furious,” wrote Socci.

In his three tweets composed in French, Cardinal Sarah attempted to extinguish the fire.

“Because of incessant arguments, naysayers, and deceptive controversies which have not stopped since the beginning of the week, concerning the book ‘From the depths of our hearts,’ I met tonight with Pope Emeritus Benedict XVI.”

“With Pope Emeritus Benedict XVI, we were able to ensure/certify that there is not one misunderstanding between us. I left very happy, full of peace and courage from this lovely meeting.”

In his final tweet, Cardinal Sarah simply encouraged people to read the book he wrote with Pope Benedict, saying, “Enjoy the read.”

“I ask/call on you to read and meditate on ‘From the depths of our hearts.’ I warmly thank my editor, Nichola Diat, as well as my publisher Fayard, for the rigor/strictness, the integrity, the seriousness, and the professionalism which they have shown. Good reading to all (of you)!

Cardinal Sarah is not the only one tamping down on the Vatican drama over the book.

As reported by LifeSiteNews today, Die Tagespost reported that Pope Emeritus Benedict's private secretary, Archbishop Georg Gänswein, denied Socci’s statements. Gänswein told the German Catholic newspaper that it was “fictitious” and a “lie” that Pope Francis ordered a complete denial of Benedict XVI’s co-authorship of From the Depths of Our Hearts.

The German secretary, who is also the head of Pope Francis’ Papal Household, stated that Pope Francis had said “nothing” to him about the book when he met with him last week. Gänswein denied also that Benedict had agreed to a compromise solution to protect him from “South American vendettas.” He maintains that the Pope Emeritus did not see the French version of the work until Monday afternoon.