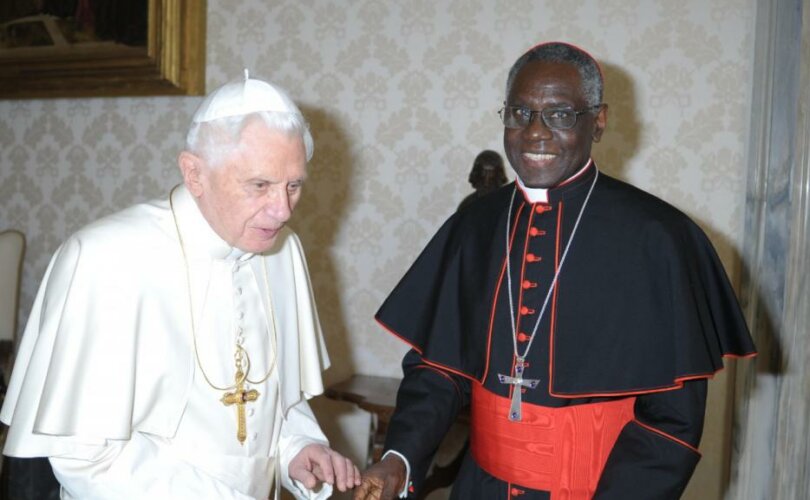 VATICAN CITY (LifeSiteNews) — Cardinal Robert Sarah, former Prefect for the Congregation for Divine Worship and the Discipline of the Sacraments, shared his personal recollections of the late Pope Emeritus Benedict XVI, with whom he collaborated closely for many years within the Roman Curia.

Noting the intellectual stature of the learned pontiff, and that “his homilies have already become classics like those of the Fathers of the Church,” Sarah said that, personally, “each encounter with him was a true spiritual experience that marked my soul. Together, they draw a spiritual portrait of the one I regard as a saint and whom I hope will soon be canonized and declared a doctor of the Church.”

Recounting his own arrival to the Roman Curia in 2001 as an archbishop, Sarah said he “looked with admiration at the perfect understanding between John Paul II and the then-Cardinal Ratzinger.

“They were so united that it became impossible for them to separate from each other. John Paul II marveled at Joseph Ratzinger’s depth. For his part, the cardinal was fascinated by John Paul II’s immersion in God. Both were looking for God and wanted to give the world a taste for this quest.”

Among Benedict’s many virtues, Sarah highlighted his dedication, sensitivity, and kindness. “I have never seen him show the slightest contempt. On the contrary, while he was overwhelmed with work, he made himself entirely available to listen to his interlocutor. If he felt that he had offended someone, he always sought to explain the reasons for his position. He was incapable of a sharp act. I must also say that he showed great respect for African theologians. He even gladly agreed to render practical services, or to pass on a message to John Paul II. This deep benevolence and respectful delicacy towards everyone are characteristic of Joseph Ratzinger,” Sarah testified.

Sarah recounted his experience as Prefect of the Congregation for the Evangelization of Peoples, to which he was appointed in 2008, and which brought him into close contact with Pope Benedict. “I had to present to him [Pope Benedict] the plans for appointing bishops from the more than 1,000 dioceses of mission countries. We had sessions that were sometimes quite long, well over an hour. Delicate situations had to be discussed and weighed. Some countries lived in a state of persecution. Other dioceses were in crisis. I was struck by Benedict XVI’s ability to listen and [his] humility.”

Speaking to Benedict’s personal trust of those with whom he worked, Sarah confided that this trust earned the pontiff betrayals within the Vatican. “I think he has always trusted his people. This has earned him betrayals and disappointments. But Benedict XVI was so incapable of concealment that he could not believe that a man of the Church would be capable of lying. The choice of men was not easy for him,” the cardinal observed.

Sarah also attested to the indomitable peace that filled the soul of a pope beset with trials and enemies on all sides, a peace that could be seen outwardly in his steady and calm gaze. “From these long, repeated conversations, I gained a better understanding of the soul of the Bavarian Pope. There was in him a perfect trust in God, which gave him quiet peace and continuous joy. John Paul II sometimes showed holy anger. Benedict XVI always remained calm. He was sometimes hurt and suffered deeply from seeing souls drifting away from God. He was lucid about the state of the Church. But it was inhabited by a peaceful force. He knew that truth cannot be negotiated. In that sense, he did not like the political aspect of his office. I have always been struck by the luminous joy of his gaze. He also had a very gentle humor, never violent or vulgar.”

Recounting the vigil at St. Peter’s Square held in 2009 for the Year for Priests, Sarah recalled that the Pope was moved to tears by the devotion and love of the many priests who filled the Square. In Sarah’s words, that evening, “the wise father taught his children,” offering those present “definitive words about priestly celibacy.” “Then the evening ended with a long moment of adoration of the Blessed Sacrament. For he always wanted to lead those he met to prayer… Prayer and adoration were central to his pontificate.”

“Benedict XVI passionately loved priests,” Sarah continued. “The crisis of the priesthood, the purification of the priesthood was his daily Way of the Cross. He loved to meet the priests, to talk to them familiarly. He also particularly loved seminarians. He was seldom happier than surrounded by all those young theological students who reminded him of his early years as a teacher. I remember that memorable meeting with seminarians from the United States at which he laughed out loud and joked with them. As they chanted ‘We love you,’ the pope’s voice broke and he said to them with fatherly emotion, “I pray for you every day.’”

In 2010, Sarah was elevated by the Pope to the College of Cardinals and appointed to Cor Unum (the dicastery responsible for works of charity). Recounting the conversation in which Benedict made his intention known, Sarah underscored his “deep Christian sense of suffering,” which he said rose in him to the level of greatness, suffering as he did “out of love for the truth.”

“I will never forget the reason he gave me: ‘I named you because I know that you have experience of suffering and the face of poverty. You will be in the best position to express with delicacy the Church’s compassion and closeness to the poorest.’ This pope had a deep Christian sense of suffering. He often repeated that the greatness of humanity lies in the ability to suffer out of love for the truth. In this sense, Benedict XVI is great! He never shied away from suffering. Never recoiled from wolves. They tried to silence him. He was never afraid. His resignation in 2013 was not the result of discouragement but rather of the certainty that he would serve the Church more effectively through silence and prayer.”

Sarah also related that his appointment by Pope Francis as Prefect of the Congregation for Divine Worship in 2014 afforded him further opportunity to meet with the Pope emeritus. “I knew how much the question of the liturgy was close to his [Benedict’s] heart. So I consulted him often. He vigorously encouraged me several times – indeed, he was convinced that ‘the renewal of the liturgy is a fundamental condition for the renewal of the Church.’”

Speaking of his collaboration with the learned pontiff regarding the publication of several books, Sarah recounted Benedict’s special joy at some of their encounters, and testified that he would never have written without the kind and gentle encouragement of Pope Benedict.

“I brought him my books. He read them and gave his appreciation. He was kind enough to write the preface to La Force du silence. I remember the day I told him I intended to write a book about the crisis of the Church. That day, he was tired, but his eyes lit up. It is necessary to have known the gaze of Benedict XVI to understand. It was a child’s gaze, joyful, bright, full of kindness and gentleness, and yet filled with strength and encouragement. I would never have written without this encouragement. A little later, we collaborated closely for the publication of our reflection on priestly celibacy. I will keep in the secret of my heart the details of these unforgettable days. I will keep in the depths of my memory his deep suffering and tears, but also his fierce and intact will not to give in to lies.”

Drawing together his recollections of the late Pope, Sarah said he could find no better image than that of the Good Shepherd. “What portrait do these memories draw? I believe they converge on the image of the Good Shepherd that Benedict XVI loved so much. He wanted none of his sheep to be lost. He wanted to feed them with the truth and not abandon them to wolves and mistakes. But above all he loved them. He loved souls. He loved them because they had been entrusted to him by Christ. And above all, he passionately loved this Jesus to whom he wanted to dedicate the three volumes of his magnum opus Jesus of Nazareth. Benedict XVI loved the one who is the way, the truth, and the life.”