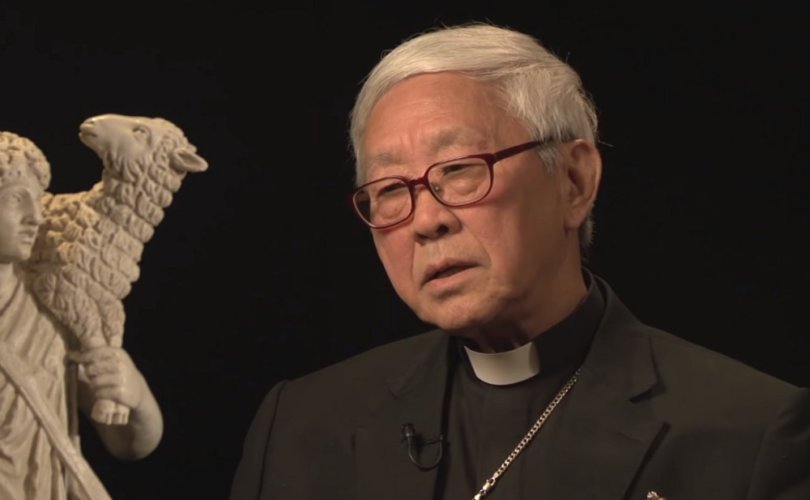 May 15, 2020 (LifeSiteNews) — Cardinal Joseph Zen has condemned the modern phenomenon of globalization while also calling out China for the role the country is playing in the world community, as well as among its own citizens.

“In China the people are slaves under the Communist Party,” the former bishop of Hong Kong pointed out in a blog post he contributed to, titled “Preparing for Post-Pandemic Humanity.”

“The fact is: a pandemic started in China and it spread quickly over the whole world,” he wrote.

“The analysis: it must have something to do with globalization. Globalization is a fact and the enormously increased mobility of the people explains, in part, the fast spreading of the pandemic.”

Cardinal Zen is one of three cardinals who signed the appeal “for the Church and the world,” warning that the COVID-19 pandemic is being used as a “pretext” by world leaders to “control” people and strip them of their fundamental rights, providing a “disturbing prelude to the realization of a world government beyond all control.”

In his blog post, published in English on May 13, Zen used the coronavirus pandemic “of apocalyptical dimension” to encourage people to “have a hard look at the journey in history of our humanity. Can we be proud of our scientific progress, of the many possibilities of more consumption?”

He pointed out that there are two aspects to globalization. “Pope John Paul II used to distinguish a ‘globalization of solidarity’ from a ‘globalization of marginalization’, one is operated by people who care for the real good of all human beings, the other is driven by selfish interest of individuals and groups.”

In the course of his article, it became clear that his criticism of globalization, and China’s role in it, was specifically directed at the “globalization of marginalization.”

While many people had welcomed globalization at first, Zen said, “the actual outcome was [very] disappointing.”

According to Zen, “the poor of the poor countries did not feel they got any help from this globalized economy of the world.”

Instead, the people “running the economic globalization are the world’s rich and strong.” He specifically mentioned the World Bank and International Monetary Fund.

“The managers of the globalization plan the world economy with scarce consideration of the real local situation and needs,” Zen continued. “Local governments and other operators, rich and powerful, may be more interested in getting the money into their own pockets rather than helping the poor people of their country.”

The cardinal then turned his attention to China. In the past, Zen had severely criticized the Chinese treatment of the Catholic Church, as well as the deal Pope Francis made with China.

Even though China is widely considered to be rich and strong, Zen urged the readers of his blog post “to distinguish between the people and the nation.”

“In a totalitarian regime the people contribute to the wealth of the nation, but they don’t get a fair share in its prosperity. In China the people are slaves under the Communist Party. To slaves … is not allowed the luxury of dignity,” Zen said in no uncertain terms.

At this point, even the people of China have become a problem, Zen said. “Under the dominion and bad example of their masters, the Chinese people have lost their traditional virtues. In a world of ‘struggle for survival’ they make recourse to lies and violence, just like their masters. China became a threat to the world.”

Zen compared China to the colonial powers of the time before the two world wars, coming to the conclusion that the “new colonizers are worse than the old ones!”

The modern silk road, officially termed the Belt and Road Initiative, has been criticized, among others, by India’s Prime Minister Narendra Modi. He called it a “colonial enterprise” threatening to leave “debt and broken communities in its wake.”

The Chinese government took over a port in Sri Lanka. It was handed over to China on a 99-year lease, which was immediately described by some as an erosion of Sri Lanka’s sovereignty.

The $1.3-billion port “was opened seven years ago using debt from Chinese state-controlled entities,” the Financial Times reported in 2017. “But it has since struggled under heavy losses, making it impossible for Colombo to repay its debts.”

Cardinal Zen pointed out that as the coronavirus has stopped life as virtually the entire world knew it, “we realize how [much] more important is the truth, our right to information and the freedom of expression.”

“In close contact with death we are encouraged to pursue the human and gospel values with more determination,” the 88-year-old prelate said. “We discover that the real heroes are not those we use[d] to admire on the screen, but those who sacrifice themselves in serving the sick, those who take care to keep clear and healthy our environment.”

“Finally,” he added, “we appreciate our faith which teaches us that we are children of God, brothers and sisters in the human family. Thank you Lord, for this lesson from the pandemic.”