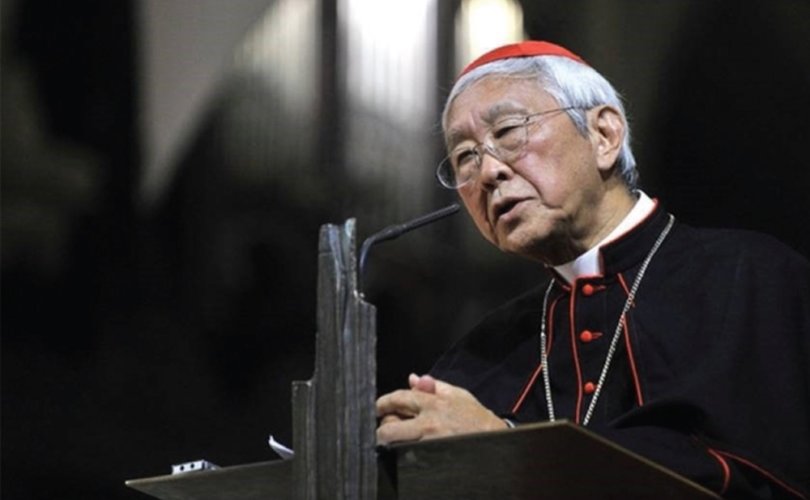 Cardinal Zen from the cover of his Jan. 2019 book "For Love of My People I Will Not Remain Silent"www.ignatius.com

HONG KONG, July 18, 2019 (LifeSiteNews) – Cardinal Joseph Zen said in an interview that China’s persecution of believers has worsened since the September 2018 provisional Vatican-Beijing agreement and he called on Catholics to “fight” for their faith in the face of this threat.

Now retired, Cardinal Zen was archbishop of Hong Kong and has been active in defending the Catholic Church from the communist government’s worsening persecution of the underground church that followed the provisional agreement reached in 2018 by the Vatican with Beijing.

Since then, the June 2019 Pastoral Guidelines of the Holy See Concerning the Civil Registration of Clergy in China to allow Catholic clergy to register with the Chinese Catholic Patriotic Association (a government-controlled religious institution that is not in communion with the Pope) has led to confusion among Catholics in China, Zen said in an interview with William Mahoney of ChurchMilitant.com.

In an earlier riposte to the Pope, Zen wrote that he fears the guidelines contained in the pastoral document may lead to the “death of true faith” among Catholics in China. In Zen’s book, “For the Love of My People, I Will Not Remain Silent,” he warned that the Pope’s “strategy was wrong,” and that it was “all about compromise and surrender.”

Pope Francis and Cardinal Zen met July 3 in Rome for dinner, with Cardinal Pietro Parolin (who negotiated the accord with China) in attendance. When Zen shared his objections to the agreement and the pastoral document, the Pope said, “OK, I'm going to take care of that; I am going to look into the matter.”

For Zen, this meant that “there is no possibility for any immediate discussion … ” He added, “So I had to be satisfied with his promise that he would look into the matter.”

Zen has yet to receive a follow-up answer from the Pope.

Cardinal Zen said the communist persecution of Chinese Catholics has worsened since the diplomatic agreement was reached. He said the agreement is “terrible,” and because of the secret agreement, Chinese Catholics are confused about registering with the government-approved worship organization.

The cardinal said that before the agreement Chinese Catholics in communion with Rome had reached a compromise with Chinese authorities. “… the underground Church could have their church buildings, and the underground priests, even in the cities, could say Masses for the faithful, even though the law is against that,” he said.

Since the agreement was reached, he said the communists enforce the law and “so it is a much harsher persecution after the agreement; it is terrible.”

Among the critics of the Vatican’s secret deal with China is Sam Brownback, the U.S. ambassador for religious freedom. In March, he told listeners in Hong Kong, “Since this provisional deal was announced last year, the Chinese government’s abuse of members of the Catholic community has continued. We see no signs that will change in the near future.”

Cardinal Zen called on Chinese Catholics to examine their consciences before registering with the communist government, adding that “conscience is the last counsel for your actions.”

Telling Catholics not to rebel, he advised that if the government should take away their churches, they should let them go. Priests who are not allowed to say Mass because they refuse to register, he said, should “go home.”

“You can never renounce your faith; but in difficult times, you can renounce the benefits of the sacraments (because they are not available) because God is able to give grace even outside of the sacraments,” he said. Catholics, he added, may offer sacrifice and hope for better times: “We put ourselves in the hands of God.”

Zen said Catholics should not trust those who want to destroy their faith.

“You have to be dissident. You have to defend yourself,” Zen said. He recalled Pope St. John Paul II, who was able to speak of “we” and “them.” Saying that while Catholics pray for their enemies and hate no one, they have enemies who “want to destroy our faith.”

Saying “forgiveness, harmony, dialogue, trust” are good things, but Zen said it is a duty to fight for one’s life and faith. While Catholics’ fundamental attitude is of trust and dialogue, they should “pray for the conversion of our enemies,” he said. “But we cannot trust them because there is no foundation for any trust,” he added, saying, “If we trust them, then we put ourselves in danger ― put our faith in danger.”

Steven Mosher, an expert on China, told LifeSiteNews via email that Cardinal Zen is a “perfectly reliable witness” regarding what is happening in China.

“No one is better informed about what is happening in China and, now, Hong Kong. The Chinese Communist Party is determined to crush Catholicism — and all religions — in China.  Cardinal Zen understands this. We need to pray that Pope Francis heeds his voice.”

Mosher wondered if Vatican authorities may one day soon regret aspects of their agreement with the communist government in light of the persecution that is unfolding. Mosher told LifeSiteNews that Cardinal Parolin informed him that the Holy See had no objection to the requirement to register with the Chinese government.

“Obviously, the Vatican has now become acutely aware that ‘registration’ with the government is not as simple as it perhaps imagined,” Mosher said. “And the underlying problem is not even addressed, namely, that (Chinese) bishops in registering are in effect joining the schismatic Catholic Patriotic Association,” he added.