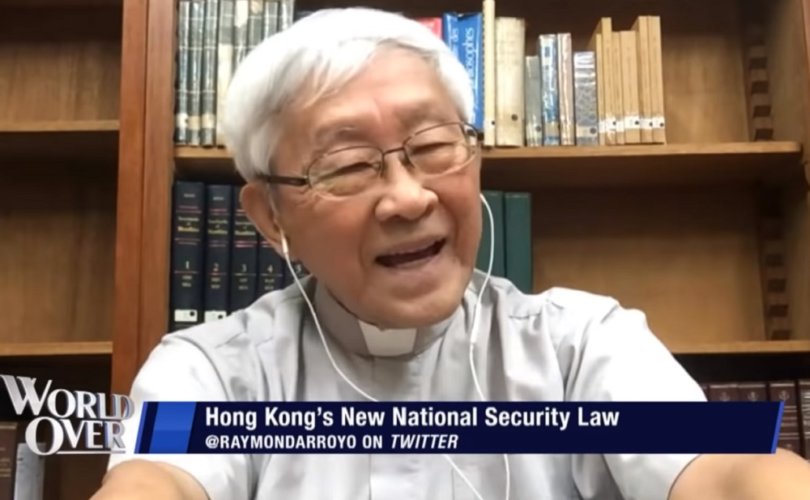 WASHINGTON, D.C., July 13, 2020 (LifeSiteNews) ― Cardinal Zen, the retired bishop of Hong Kong, told a popular EWTN news host that the Vatican deal with China is a “betrayal of the real Church.”

Zen, 88, appeared on EWTN’s The World Over with Raymond Arroyo show on July 10 to discuss China’s new “security law” for Hong Kong. The measure was imposed upon the former British colony on June 30.

Pope Francis was expected to comment last Sunday on the unhappy situation in Hong Kong and speak in defence of religious freedom. The remarks were in copies of his speech distributed to journalists, but he dropped them from his Angelus address.

“I have seen the text, which is very mild, in no way offensive to the Chinese government,” said Zen.

“Some say maybe the Holy Father thought it was better not to say [something], or some say he may have received some word from the Chinese Embassy in Italy.”

“It’s not an isolated episode. It’s already a long-standing policy of the Vatican not to offend the Chinese government.”

Cardinal Zen also repeated his misgivings about the secret deal between the Holy See and the communist government of China, noting that after the concordat was signed, circumstances for Catholics in China became much worse. Seven bishops of the schismatic Chinese Catholic Patriotic Association who had challenged Church doctrine were legitimized in the wake of the agreement, and even now, they show no sign of repentance or gratitude to Pope Francis, Zen said.

“They went around singing triumph,” he said. “Now they are winners. They have been clever to follow the government.”

Because of the failings of these seven bishops and the fact that good underground Catholic bishops loyal to Rome were asked to step aside for two of them, Zen believes he is justified in saying, as he has said previously, that Pope Francis “is giving the sheep to the wolves.”

“If you knew those seven people, [you would ask] how could they become bishops? Two of them are not observing the law of celibacy[.] … Everybody knows. I may be a big sinner, but they are public sinners,” he said. “So it’s a scandal to make them bishops.”

Zen is even more distressed by the supplanting of the two faithful underground bishops by bishops from the Patriotic Association.

“It’s a betrayal of the real Church,” he declared.

“With this so-called national security law, we are back to the Cultural Revolution,” Zen said. “We are at the mercy of this new commission.”

The cardinal said he went through the whole text of the law and said he could sum it up in one sentence: “Now they can do anything.”

“We need your prayers because we are in the hands of the madness of our government,” he said.

Cardinal Zen does not agree.

“I am a good brother to Cardinal Tong, but he has to be obedient to the instructions of the Vatican,” the cardinal said. “And now to be with the Vatican almost means to be full of respect for the Chinese government.”

“For me the Vatican is constantly pursuing a policy of submissiveness to the Chinese government,” Zen continued. “I cannot explain the meaning of what Cardinal Tong said because for me the Basic Law is finished.”

Hong Kong has not had a bishop of its own for a year and a half, and Zen believes that this is because the successful candidate will need “a blessing” from Beijing.

Cardinal Zen refused to make a distinction between churchmen like himself and all the citizens of Hong Kong, whose freedoms he believes are under threat. Zen stated that anyone who protests the new national security law is in danger, and he is no exception.

“I think we bishops, even a bishop emeritus, have a duty to defend freedoms because by our episcopal ordination we are now responsible for the sustaining of the doctrine of the Church,” he added.

“The Church is on the side of the persecuted, and so we are bound to say something which may be taken as an offense against the new law.”

Zen said he knows that American Catholics are praying and doing “many things” to help the Church in China, and that he hopes that the whole Church will awaken.

“Now we can see the real face of the Chinese Communist Party, and now [we have] spiritual warfare between the Lie and the Truth, between the selfish desire of power, of domination, and concern for other people,” he said.

“So it is warfare between good and evil. I hope the whole world will stand up.”

A year ago, Zen made an emergency trip to Rome in an attempt to warn Pope Francis about the Vatican’s just-released pastoral document that gives priests in China reasons why they should register with the communist government.

The cardinal marked the anniversary this July by noting on his blog and Twitter that Pope Francis had still not responded to his several “dubia” or criticisms of the document that Zen described as “the most cruel thing” the Vatican has done concerning the Catholic Church in China, “absolutely against the doctrine of the Church, because it encourages people to be part of a schismatic Church.”

With the “Pastoral guidance for the civil registration of clergy in China,” Parolin “murdered the Church in China,” Zen wrote.

After reading the document, the retired bishop of Hong Kong immediately flew to the Vatican to meet with Pope Francis.

Once he arrived in Rome, Zen sent a letter to the pope asking him to be present “at a dialogue between me and Cardinal Parolin, the obvious author of the document.”

He described how after receiving no answer, he sent Pope Francis another letter on July 1 along with “my ‘dubia’ about the document, which I judged to be absolutely against the doctrine of the Church, because it encourages people to be part of a schismatic Church.”

On July 2, Francis advised Zen by letter to talk to Parolin, at which point the cardinal told the message-bearer:  “It would be completely useless; so, please, tell the Holy Father I’m going back empty-handed.”

But the pontiff then invited Zen to a July 3 supper ― but with another guest: Parolin himself. During the supper, Parolin didn’t have much to say. Pope Francis showed “great affection” to Zen, the Chinese cardinal recalled, but also “some embarrassment.”

Zen wrote that he realized that Parolin had planned the dinner to make it clear that the Holy Father listened to him, not Zen, and that Parolin had no intention of talking about the pastoral guidelines to Zen.

“So I did not come back empty-handed. I had a chance to see with my eyes that Parolin is manipulating the Holy Father,” he wrote.