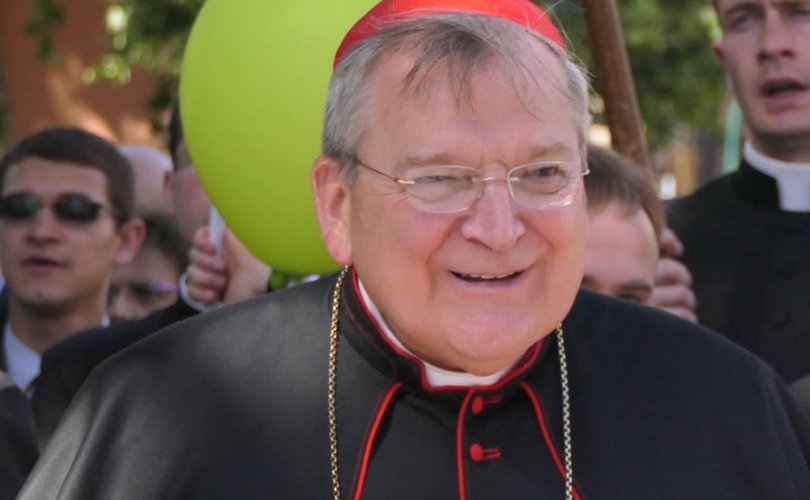 February 19, 2019 (LifeSiteNews) – Cardinal Raymond Burke thinks the controversial statement in a joint Catholic-Muslim declaration signed by Pope Francis in Abu Dhabi earlier this month, which says that God wills a diversity of religions, is wrong and should be removed.

The statement “has to be removed from this accord because it’s not correct,” Burke said.

The prefect emeritus of the Apostolic Signatura joined numerous theologians and philosophers who have criticized the passage that stated the “diversity of religions” is “willed by God.”

Pope Francis signed the document, “On Human Fraternity for World Peace and Living Together,” along with Sheikh Ahmed el-Tayeb, grand imam of Egypt’s al-Azhar Mosque, on February 4.

The signing was part of an interreligious meeting during Francis’ three-day apostolic visit to the United Arab Emirates February 3-5, the first time a pope has visited the Arabian Peninsula.

While the Vatican has called the document “an important step forward” in Christian-Muslim relations and a “powerful sign of peace and hope for the future of humanity,” some are saying the particular passage seems to contradict the Catholic faith.

Others have downplayed the controversy associated with the statement.

“Freedom is a right of every person: Each individual enjoys the freedom of belief, thought, expression and action. The pluralism and the diversity of religions, color, sex, race and language are willed by God in His wisdom, through which He created human beings. This divine wisdom is the source from which the right to freedom of belief and the freedom to be different derives. Therefore, the fact that people are forced to adhere to a certain religion or culture must be rejected, as too the imposition of a cultural way of life that others do not accept.”

In comments to the National Catholic Register, Burke observed how some have tried to explain the statement by saying that the pope is referencing the permissive will of God –  that other religions are an “an evil that God permits.”

According to the cardinal, however, the Abu Dhabi document is not stating this, but rather, “that the plurality or diversity of religions is good.”

“That’s a mistaken notion,” said Burke. “It’s certainly confusing for the faithful regarding salvation, which comes to us through Christ alone.”

Burke isn’t alone in saying the statement is incorrect and needs to be removed from the document.

The passage contradicts the Great Commission

Austrian Catholic philosopher Josef Seifert asked, “How can God, who wants his disciples to go out and preach to the whole world and baptize them, have willed any Christian heresy, let alone religions that deny the faith of which Jesus says to Nicodemus that he who believes in him will be saved and he who does not will be damned (John 3:18)?”

The passage contradicts the Great Commission, said Seifert, which is Christ’s instruction to make disciples of all nations, baptizing them in the name of the Father and of the Son and of the Holy Spirit, and spreading His teaching. Instead it turns God “into a relativist,” Seifert said, who neither knows there is only one truth, nor cares whether men “believe in truth or falsity.”

Seifert called on Pope Francis to “revoke” the sentence that “constitutes a total break with logic as well as with biblical and Church teaching.”

‘Seems to overturn the doctrine of the Gospel’

Church historian Professor Robert de Mattei said the problematic statement on pluralism and the diversity of religions being “willed by God” and Francis’ associated call for Christians and Muslims to enter the “ark of fraternity,” a reference to the Genesis flood narrative of Noah’s Ark, “seems to overturn the doctrine of the Gospel.”

The ark is presented by St. Paul in Heb. 11:7 as a refuge of salvation for believers and a sign of perdition for the world, said de Mattei.

“Catholic Tradition has therefore always seen in Noah’s Ark the symbol of the Church, outside of which there is no salvation,” he said.

The distinction of the three persons in the divine unity (CCC 254) marks a fundamental difference in the belief in God and the image of man from that of other religions. Religions disagree precisely over this belief in Jesus the Christ. … Therefore, the first letter of John refers to one who denies His divinity as an antichrist (1 John 2:22), since Jesus Christ, the Son of God, is from eternity one in being with God, His Father (CCC 663).

‘Christianity is the only God-willed religion’

Bishop Athanasius Schneider, auxiliary bishop of Astana, Kazakhstan, released a statement following the Abu Dhabi document’s release in which he educed the Francis pontificate’s emphasis on immigration and the controversial concept of purported man-made climate change. He said among other things, “the most urgent task of the Church in our time is to care about the change of the spiritual climate and about the spiritual migration.”

“Christianity is the only God-willed religion,” Schneider said. “Therefore, it can never be placed complementarily side by side with other religions. Those would violate the truth of Divine Revelation, as it is unmistakably affirmed in the First Commandment of the Decalogue, who would assert that the diversity of religions is the will of God.”

A Dominican theologian wishing to remain anonymous told LifeSiteNews the controversial passage in the Abu Dhabi declaration “in its obvious sense is false, and in fact heretical.”

“The various religions say incompatible things about who God is and how He wants to be worshipped. Therefore they cannot all be true. Therefore God, who is truth, cannot will all religions,” he said.

“God permits non-Catholic religions to exist,” the Dominican theologian continued, “but permitting something is not a way of willing it, it is a way of not willing to prevent it. Thus God permits many innocent people to be killed, but He does not will it. We would not talk about God’s permissive will for Jews to be gassed, for example.”

The theologian also pointed out to LifeSiteNews further problematic wording in the statement through the use of the term “faith in God” to denote affirming that God exists or believing in any kind of alleged revelation, even a non-Christian one.

“Faith is the virtue through which God moves us to assent to what He has revealed through the Old Testament prophets and the New Testament apostles, and most of all through His Son,” he said. “People who believe in non-Christian religions therefore do not do so by faith … but by some kind of human opinion.”

Controversy around the joint Catholic-Muslim statement has not been assuaged by the conflicting reports on whether the papal theologian signed off on the document.

Sources said Dominican Father Wojciech Giertych had been consulted earlier in the process but did not see the final draft of the declaration, despite Pope Francis having claimed on his return flight from Abu Dhabi that the papal theologian “officially” read and “approved” it.

The Register had asked papal spokesman Alessandro Gisotti if the papal theologian was aware of the passage and if he’d deemed it could be interpreted in a theologically acceptable way. Gisotti responded February 13 that Giertych had seen the document on “Human Fraternity” “at the final moment of its preparation” and that there is “no basis for questioning” the Pope’s words about the matter on the papal plane.