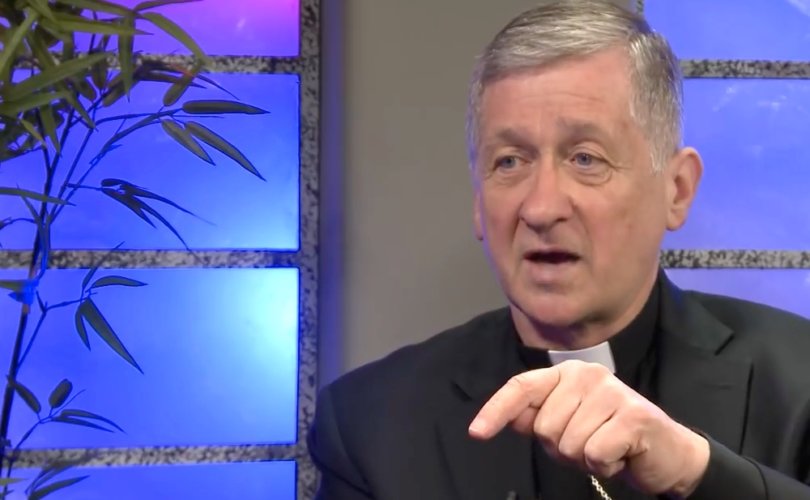 CHICAGO, October 9, 2018 (LifeSiteNews) – Backing a recent statement by a top-ranking Vatican cardinal, the Cardinal Archbishop of Chicago has defended Pope Francis from criticism in the wake of allegations he covered up for a clerical sexual predator.

Cardinal Blase Cupich, plucked from relative obscurity by Pope Francis to oversee one of the most important dioceses in the United States, released a statement yesterday in which he cited Cardinal Marc Ouellet’s impassioned response to Archbishop Viganò.

“In his capacity as Prefect, Cardinal Ouellet … called to account those attacking or countenancing attacks on the Pope and the Church,” Cupich wrote.

“In that spirit, I join my voice to those of the Prefect and of the President of the United States Conference of Catholic Bishops in urging ‘all in the Church particularly the bishops to reaffirm our communion with Pope Francis who is the visible guarantor of the communion of the Catholic Church’.”

Viganò, whose original bombshell testimony against disgraced former cardinal Archbishop Theodore McCarrick implicated Pope Francis in McCarrick’s return to favour, recently appealed to Ouellet to release documents concerning McCarrick and to reveal what he knew about cover-up in the curia. Viganò named Cupich in his testimony, saying that his appointment to Chicago was “orchestrated by McCarrick” and others who were “united by a wicked pact of abuses.” He also criticized Cupich for his “ostentatious arrogance, and the insolence with which he denies the evidence that is now obvious to all: that 80% of the abuses found were committed against young adults by homosexuals who were in a relationship of authority over their victims.”

In response, Ouellet, the Prefect of the College of Cardinals, issued a statement blasting the Vatican whistleblower for what the document called his “open and scandalous rebellion” against Pope Francis. Ouellet stated that Viganò’s allegation that Francis had knowingly covered up for a sexual predator and was, therefore, “an accomplice” to corruption within the Church was “unbelievable and without any foundation.”

Cupich said that Ouellet’s response was “authoritative and “compelling”:

“In an authoritative and compelling manner, he provided a detailed response to the central charges against Pope Francis regarding the case of Archbishop McCarrick,” Cupich wrote.

However, Ouellet’s critics do not share Cupich’s warm endorsement of the Prefect’s statement.

Both Damian Thompson of the Catholic Herald and Rod Dreher of the American Conservative have pointed out that the Prefect for the College of Cardinals has merely vindicated Viganò’s claim that Benedict placed some form of sanction on Cardinal McCarrick. Ouellet reveals that he told Viganò of “certain conditions and restrictions” on McCarrick when Viganò became Apostolic Nuncio to the USA:

“…the written instructions given to you by the Congregation for Bishops at the beginning of your mission in [2011] did not say anything about McCarrick, except for what I mentioned to you verbally about his situation as Bishop emeritus and certain conditions and restrictions that he had to follow on account of some rumors about his past conduct,” Ouellet wrote in his reproof to Viganò.

Dreher, the bestselling Christian author who lost his faith in the Catholic Church because of  episcopal cover up of clerical sexual abuse, wrote in the American Conservative that Ouellet’s defense of Francis was “not credible”:

Cardinal Ouellet’s letter “oozes sweetness and oil like a doughnut fresh out of the fryer,” Dreher wrote. “It is not credible. Archbishop Viganò’s claims remain unaddressed in a meaningful way.”

“The real news out of the Ouellet letter is that McCarrick was placed on some kind of restriction over his behavior, though Ouellet maintains that there is no paper record of it having been done. But Ouellet’s claims that Francis had no particular interest in McCarrick, and that there is no evidence that McCarrick had influence over Francis, cannot be taken seriously,” Dreher continued.

“The greater part of the Ouellet epistle amounts to a sanctimonious, “How dare you, Vigano?!””

In his statement, Cupich said that he believed Pope Francis’s October 6 declaration that the McCarrick case would be given “a thorough study”, that the pontiff was committed to “addressing the scourge of abuse” in the Church, and that the Church would no longer tolerate any cover-ups or double standards for bishops.

“This clear statement does not come as a surprise to me, for I am convinced that Pope Francis has no hesitation in following a path of accountability,” Cupich declared.