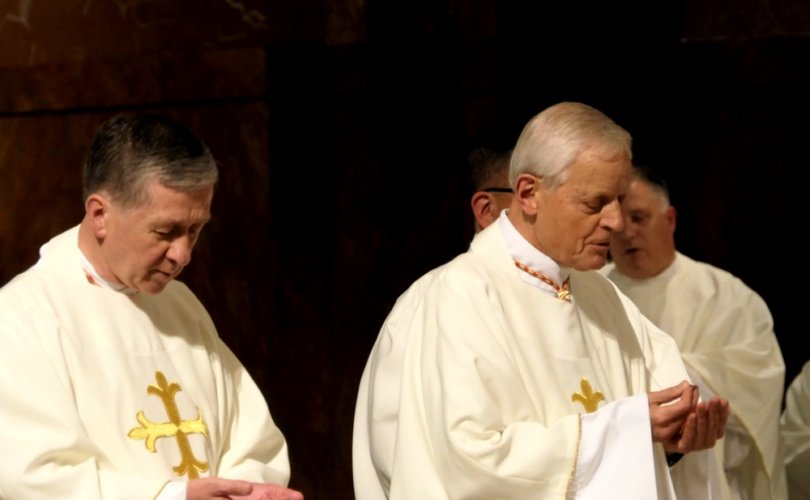 WASHINGTON, D.C., August 16, 2018 (LifeSiteNews) – As Bishop of Pittsburgh, Donald Wuerl allowed pedophile priests to continue in active ministry, according to an explosive grand jury report released by the Pennsylvania Attorney General on Tuesday.

This and more was revealed in the damning report on decades of sex abuse and how it was covered up in six Pennsylvania dioceses. One-third of the priests named as accused of sex abuse in the report came from the Diocese of Pittsburgh.

As Archbishop of Washington, though, now-Cardinal Wuerl did not afford the same mercy to a priest who upheld the Catholic faith and suffered a media firestorm for it.

In a much-publicized 2012 case, Father Marcel Guarnizo discreetly refused to give Holy Communion – which according to the Catholic Church is the literal body, blood, soul, and divinity of Jesus Christ, only to be consumed by practicing Catholics in a state of grace – to an active lesbian at her mother’s funeral. Fr. Guarnizo, a priest of the Roman Catholic Diocese of Moscow, Russia, was officiating the funeral at St. John Neumann parish in Gaithersburg, Maryland, located within the Archdiocese of Washington.

“I understand and agree it is the policy of the archdiocese to assume good faith when a Catholic presents himself for communion; like most priests I am not at all eager to withhold communion,” Fr. Guarnizo wrote of the incident. However, the woman he denied Communion, Barbara Johnson, made a point of introducing herself as a lesbian to him before Mass, entering the sacristy and introducing another woman as her “lover.”

“If a Quaker, a Lutheran or a Buddhist, desiring Communion had introduced himself as such, before Mass, a priest would be obligated to withhold communion. If someone had shown up in my sacristy drunk, or high on drugs, no Communion would have been possible either. If a Catholic, divorced and remarried (without an annulment) would make that known in my sacristy, they too according to Catholic doctrine, would be impeded from receiving Communion,” he explained.

Fr. Guarnizo quietly refused to give Johnson the Eucharist. She “promptly chose to go to the (lay) Eucharistic minister (nearby) to receive communion and did so,” Fr. Guarnizo explained.

Johnson then made a large stink about the event in the secular press, and Fr. Guarnizo was promptly raked over the coals and the Archdiocese of Washington censured him, revoking his permission to operate as a priest in Wuerl’s ecclesial territory.

Fr. Guarnizo was punished for “engaging in intimidating behavior toward parish staff and others that is incompatible with proper priestly ministry,” Wuerl’s auxiliary, Bishop Barry Knestout, wrote in a letter at the time.

The Archdiocese of Washington released a statement asserting “that the prime obligation to determine one’s preparedness to receive Communion falls to the persons who are presenting themselves for Communion. In extreme cases where someone has been formally excommunicated or is trying to use the Eucharist to make a political statement it is appropriate to consider denying Communion.”

“In the days after the funeral Mass, the archdiocese issued an apology to Johnson and sent a letter stating that Guarnizo’s refusal of Communion to her was against the policy of Archbishop Donald Wuerl, who has said it is not the right time or place for a spiritual standoff,” the Washington Post reported at the time.

In sharp contrast to the Archdiocese of Washington’s swift removal of Fr. Guarnizo for following Catholic teaching on Holy Communion, the grand jury report indicates that the Diocese of Pittsburgh under Wuerl didn’t immediately take priests accused of child sex abuse out of public ministry, thus allowing them continued access to children.

One Pittsburgh priest, Father George Zirwas, was reported to the diocese as having molested underage boys. Some of these complaints were filed when Wuerl was bishop.

“The Grand Jury learned that the Diocese was aware of complaints against Zirwas for sexually abusing children as early as 1987,” the report says. “Additional complaints were received between 1987 and 1995. However, Zirwas continued to function as a priest during this period and was reassigned to several parishes.”

Wuerl and diocesan bureaucrats knew about complaints against Fr. Zirwas but let him continue in active ministry, putting more boys at risk for homosexual molestation.

The diocese had Zirwas “evaluated” by a hospital in 1988, but he “continued in ministry” after being released, the grand jurors found.

After bouncing to a few other Pittsburgh parishes, Fr. Zirwas met in July 1995 with then-Father David Zubik – who later succeeded Wuerl as bishop of Pittsburgh – and “threatened to pursue legal action against other diocesan personnel for ‘raising the consciousness of some of the people at St. Joseph Parish concerning his relationship to the public scandals which surfaced in 1988.’”

“Within days, Zirwas was returned to ministry by Bishop Donald Wuerl,” the grand jury learned.

Zubik was already aware of complaints against Zirwas, having been told about molestation he committed during a meeting with a victim and two other priests in June 1991.

In November 1995, the diocese received yet another complaint about Zirwas, and he was placed on a leave of absence for “personal reasons.”

He remained on that leave of absence for the rest of his life. His involvement with the diocese wasn’t over, though.

Although he moved to Florida (and later Cuba, where he was murdered, according to Church Militant, by a gay prostitute), in 1996, Zirwas told the Diocese of Pittsburgh he knew about illegal sexual activity being committed by other Pittsburgh priests. In exchange for this information, he wanted the money he was receiving from the Church to be increased.

Wuerl responded saying Zirwas was to either send him the names of these predator priests, or state the exact opposite of what he had just claimed – that he knew nothing about pedophile priests in the diocese.

Zirwas opted to recant his claim, and the amount of money he received monthly increased.

“Zirwas informed the Diocese (in 1996) that he had knowledge of other Pittsburgh Diocese priests' involvement in illegal sexual activity. In exchange for this information, he demanded that his sustenance payments be increased.

In response to this request, Wuerl instructed him to document in writing the names of the priests involved, or, state that he had no knowledge of what he had previously claimed. Wuerl advised that this action had to be undertaken before Zirwas could receive any additional assistance. After Zirwas disavowed any knowledge of priest involvement in illegal sexual activity in a letter to the Diocese, he was granted an additional financial stipend and his sustenance payments were continued.”

Another Pittsburgh priest who appears to have been treated with more leniency than Fr. Guarnizo is Fr. Ernest Paone. Before Wuerl took office in Pittsburgh, the diocese had been warned about Paone’s predatory behavior and still recommended other dioceses allow him to function as a priest in good standing.

The grand jury report says that then, while Wuerl was running the diocese:

In March, 1992, Paone took a leave of absence from the Archdiocese of Los Angeles for “reasons of health.” On July 25, 1994, the Diocese of Pittsburgh received another complaint of child sexual abuse committed by Paone in the 1960s. The victim's sister came forward and reported that after becoming aware of the abuse, her father “went to the rectory with a shotgun and told Father Paone that he better leave town.” The Diocese sent him to St. Luke's Institute for an evaluation.

In a confidential letter sent to St. Luke's, the Diocese acknowledged that Paone had been teaching seventh and eighth grade students in the Diocese of San Diego for 19 years. Further, in another confidential memorandum sent from Zubik to Wuerl, Paone' s various assignments and sexual abuse complaints were again listed in detail. The Grand Jury noted that this process showed no concern for public safety or the victims of child sexual abuse. The handling of these matters was commonplace. In spite of the complaint, Paone continued in active ministry following his brief evaluation at a church-based treatment facility.

The Grand Jury discovered that this 1994 complaint resulted in the generation of Diocesan records that noted an even greater extent of knowledge regarding Paone' s sexual conduct with children. An August 5, 1994 confidential memorandum sent from Zubik to Wuerl advised him of this new complaint against Paone and that due to this complaint, his file was reviewed “with great care.” Among other things, Zubik advised Wuerl that questions about Paone's emotional and physical health were raised as early as the 1950s, while he was still in seminary. Zubik further advised of Paone's various assignments and correspondence over the years, before also describing the multiple records documenting the Diocese's knowledge of his sexual abuse of children as early as 1962. Zubik then noted that with respect to these latter records, “You should know that these last three pieces of correspondence were placed in the confidential files.”

On July 29, 1996, Wuerl was informed by the Chancellor of the Diocese of San Diego that Paone had continued with his ministry, but, “acting on the advice of our insurance carrier,” he was requesting that Wuerl complete the enclosed affidavit, which stated, among other things, that Paone has “not had any problems involving sexual abuse, any history of sexual involvement with minors or others, or any other inappropriate sexual behavior.”

On August 12, 1996, Wuerl directed Father Kozar, Secretary for Clergy and Religious, to respond to the request. Kozar then sent a confidential letter to the Diocese of San Diego and advised, among other things, that:

Father Paone has not had an assignment in this diocese for over 30 years. Thus, the only appropriate information about him has already been communicated to you in a letter from Father Robert Guay, Secretary for Clergy and Religious, dated January 30, 1996.

Paone was eventually, 41 years after the Diocese of Pittsburgh knew of the abuse he’d committed, removed from public ministry. He died in 2012.

According to the grand jury report, the Diocese of Pittsburgh under Wuerl took its time in removing predatory priests from active ministry, sometimes still paying them or allowing them to transfer to another diocese, despite being aware of complaints against them.

The Archdiocese of Washington under Cardinal Wuerl was swift to act when faced with a different kind of priest, though: a faithful one who quietly tried to do the pastoral thing.